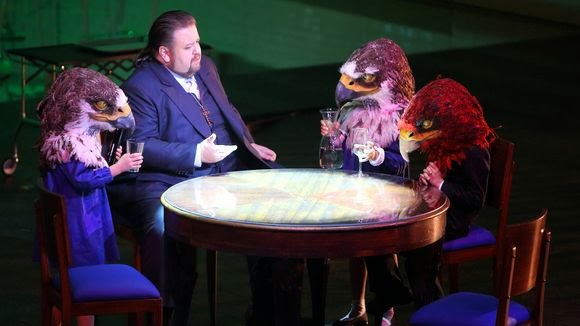 The Bayerische Staatsoper broadcast Richard Strauss Die Frau ohne Schatten live from Munich. This was an important occasion because Munich and Strauss were so closely associated. Moreover, audiences there understand the social and cultural context of the opera. Strauss and Hugo von Hofmannsthal were fully aware of the Munich Seccession which long predated the overhyped, over-commercialized Vienna Seccession. In Munich painters like Franz von Stucken created images of erotic symbolism. Wedekind wrote plays which would influence Alban Berg and Bertolt Brecht. Thomas Mann wrote novels. In Munich there was huge interest in psychology, and in early expressionist film. Franciska von Reventlow championed women's rights. Without Munich, Weimar Berlin might not have taken off.

What does Die Frau ohne Schatten  mean? Its bizarre mix of surreal symbols, sexuality and disease connect modern psychodrama with Classical myth. Krzysztof Warlikowski's production is exceptionally well informed.  In this dreamscape, logic simply doesn't apply. The secret, I think, is to understand Munich. and the intense cultural ferment of the period.

The Moon Mountains are isolated, cut off from the world of humans by dark waters (a symbol of life). Bavaria hadn't become part of the German Reich until forced into submission. Like the mythical creatures of the kingdom, and indeed everyone else, they had to find a way of dealing with the issues of the world. Warlikowski's staging emphasizes moonlight colours and images of sleep.  The kingdom was created by Keikobad, who controls events like the Moon controls the tides and the night. Keikobad engendered the Kaiserin through a falcon and gazelle: hunter and hunted. Warlikowski's falcon head images resemble paintings of the period.  But the unnatural union has made the woman "without a shadow". The Kaiser is powerless and will be turned to stone by the curse. So the Kaiserin and her Nurse venture to the world of humans to find a soul (a  shadow).

Significantly, Barak the Dyer can change the colour of cloth. Act Two comes alive with jewel colours, red, green, blue, glowing against clinical industrial backgrounds that suggest judgement and tough decisions. Kyril Petrenko conducts the interludes to gorgeous effec : we feel as exhilarated by the music as the Kaiserin might feel in the presence of something so new and so alien. Throughout the opera, images of fertility and sterility, youth and age abound  Off stage and unseen voices constantly intrude on the action. This is no accident. The text keeps referring to "powers beyond us" who control destiny. Magical video images of humanoid shadows floating in space, or perhaps cosmic amniotic fluid.

Modern people may be uncomfortable with the idea that women need babies to be fulfilled, but the concept connects to something much more fundamental.  Parenthood is a kind of mystic channel through which the dead return, replenishing the world. The Dyer's Wife fights her desires, transmuting them into meaningless sex. There's nothing titillating in the gang bang scene, even though we see hunky pecs. The music suggests futility and sorrow. Marital love will triumph in the end, because it represents a committment to the continuum of human existence. Thus, the offstage voices come into focus as the opera continues. We see children who come gradually closer and are at last integrated with the principals. Even Old Keikobad comes back. He doesn't sing but he has been a presence all along.  When the Kaiserin calls upon him, perhaps she is summoning him to return to the world, reborn.

Adrianna Pieczonka created an astonishingly vivid Kaiserin. Her Chrysothemis in Elektra at the Royal Opera House (more here) was mpressive. She brings similar authority, and more, to her Kaiserin. She tackles tricky high tessitura effortlessly, and her phrasing is assured and mature, suggesting the character's intelligence and self possession. Her timbre is warm and golden, suggesting the woman she will blossom into when the curse is lifted. Pieczonka's Kaiserin is strong, and knows that her power lies in being a whole person, complete with shadow,

Johan Botha sang the Kaiser: exquisitely beautiful timbre, pitiful yet heroic at the same time. He's more expressive than he gets credit for, entranced as we are by his voice, and he makes the role feel sympathetic. Like Barak, he's no macho figure of authority, but believably human.  John Lundgren sang Barak the Dyer. He sings with matter-of-fact solidity, creating Barak as a good-hearted man of responsibility who may not be flashy but who cares for other people.

Significantly, Strauss and von Hoffmansthal did not give the Dyer's Wife a functional name. Elena Pankratova convincingly creates the numerous changes in the character's personality. This is a demanding role because the voice has to adapt to extremes of emotion, some counterintuitive.  Like the Kaiserin, the Dyer's Wife finds her true "shadow"when she comes to terms with her deepest feelings. Deborah Polaski made the Nurse something of a star turn. Once, perhaps, the nurse was a Diva, for the part calls for sudden switches up and down the register, which Polaski negotiates well. She can act, too. When she raises an eyebrow and looks querulous, she expresses volumes. Like Keikobad, she doesn't stay dead but returns as a glamourous new nurse.

Whatever Die Frau ohne Schatten might mean, Warlikowski engages with the different levels and themes. He finds a way into the characters as complex human beings rather than stereotypes.  We really don't need to know much about Secession Munich to appreciate this production, but if we refuse to engage with the symbols and dismiss this staging, we're the losers. "Konzept" may be a swear word to some  - it's racist - but all it means is "joined up thinking".

Please also see my review "Sensation but no Scandal, Eugene Onegin", also Munich, also Warlikowski.  Every production, every performances involves a degree of interpretation. Whatever we see is going to be a perspective other than our own. It's not rocket science.