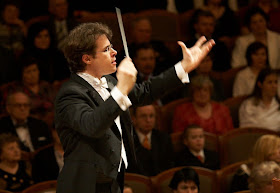 At Prom 56, Jakub Hrůša conducted the BBC Symphony Orchestra in a programme on the theme of the Hussite Wars and their place in Bohemian culture - Smetana, Martinů, Dvořák, Janáček and Josef Suk. Pity the BBC publicity machine branded this  "The Bohemian Reformation", like Nigel Farage squealing "Independence Day" as if the fate of the nation was a movie.  The Hussite movement happened started a hundred years before the Luther Reformation. They were wiped out.  Jan Hus (1369-1416) was burnt at the stake and the religious ideas he espoused largely forgotten. But the movement became a cultural symbol, adapted to the growth of Czech identity. Hrůša's programme was much more than tub-thumping nationalism.  In any case, there's a lot more to national heritage than bombastic bullying. Hrůša's Prom was a sophisticated, musically literate  study of specific themes in Bohemian music history, and needs to be appreciated in musical terms.

Hrůša started with the Hussite hymn Ktož jsú boží bojovníci (Ye Who Are Warriors of God), the men of the BBC Singers singing without accompaniment.  Though we rarely hear the hymn as hymn, its tune is familiar.  Smetana used it in Má vlast, quoting it in the section Tábor which we heard here, the town of Tábor being a Hussite fortress.  Thus the quiet, tense introduction, developed through brass and timpani, which grows bolder as the hymn emerges.  Triumphant climaxes and the hymn theme surges. But as we know, the Hussites were annihilated.  Thus Blaník depicts the even earlier legend that St Wenceslaus, patron saint of Bohemia, will return to defend the nation.  Smetana, writing at a time when Bohemia was ruled by the Hapsburgs, drew connections between the tenth-century saint and the Hussites. The strong angular themes in Tábor return in even greater glory in Blaník: massive drum rolls and crashing cymbals Czechoslovakia was annexed by Germany, with the implicit approval of Britain.  Bohuslav Martinů's Polní mše, H. 279 Field Mass (1939) was written for Czech exiles fighting with the French against the Germans. Thus the strange instrumentation, with brass and percussion employed to suggest the idea of performance in battlefield conditions.  Drum rolls, marching rhythms,  trumpet calls and a chorus of male voices. But also piano and harmonium and a part for baritone soloist beyond the scope of an average amateur.  Fortunately, in Svatopluk Sem, we heard one of the most distinctive voices in the repertoire. Sem is a stalwart of the National Theatre in Prague, well known to British audiences for his work with Jiří Bělohlávek who transformed the way Czech music is heard in this country.  Sem delivered with great authority, imbuing the words with almost biblical portent.  His text is based on poetry by Jiří Mucha, who was soon to marry Vítezslava Kaprálová. (please read more about her here  Her Military Sinfonietta (1937) would have worked well in this programme, though it doesn't include a part for choir.

In Martinů's Field Mass, the choir acts as foil to the soloist, voices in hushed unison, mass (in every sense) supporting the individual.  Though their music is relatively straightforward Miserere, Kyrie and psalm, this simplicity enhances the idea of mutual support, reflecting the relationship betweenpiano with harmonium, voices and soloists surrounded by atmospheric percussion and brass.  The version we heard at this Prom is the new edition by Paul Wingfield.

Somewhat less spartan instrumentation for Dvořák's Hussite Overture O67 (1883) though the hymn-like purity of the anthem  rings through clearly. The rough hewn faith of the Hussites doesn't support exaggeration.  Full crescendos and running figures, (piccolo and flutes) flying free from the fierce "hammerblows"of the hymn.  A glowing finale, from the BBC SO in full flow.   The pounding rhythms of  the Hussite hymn come to the fore in the Song of the Hussites  from The Excursions of Mr. Brouček to the Moon and to the 15th Century   Here the reference to the hymn is used for satire, contrasting the  morality of the Hussites with the depravity of modern life, represented by the feckless, drunken Mr Brouček. To conclude this huge, ambitious programme,

Josef Suk's Prague op 26 (1904), in a tribute to Jiří Bělohlávek who made the BBC SO one of the finest Czech orchestras outside Czechia.  (Please read my tribute to  Bělohlávek with many links to his London performances of Czech repertoire. ).The same goes for the BBC Singers who sing Czech pretty well.  The piece was written at a dark time in Suk's life, after the death of his wife Ottilie and father-in-law Antonin Dvořàk. It connects to Suk's Asrael Symphony (op 27, 1905)  and even to The Ripening ( op 34, 1912-7).  All three pieces deal with death, made almost bearable by faith, despite extreme grief.In Suk's Prague, the Hussite hymn makes an appearance as a symbol of something that lives on beyond temporal restraints., Suk seems to be surveying the city he loved, contrasting its history of struggle with his present.  Perhaps, as he looked out on the castle, cathedral and the Rudolfinium, he could position his sorrow in a wider context. People die, but cultures remain.   That's why I feel so strongly that the term "Bohemian Reformation" is a crock. There''s a lot more to heritage than simplistic nationalism.  Hrůša conducted Suk's Prague with such intensity, that the performance eclipsed all else in an evening filled with high points.

Jakub Hrůša's belated Proms debut but he is one of the most exciting conductors around, full of character and individuality.  Though he's young, he's extremely experienced, and at a high level. In the UK, he's conducted at Glyndebourne and with the BBC SO and the Philharmonia, where he becomes Chief Guest Conductor next season.  He is a natural in Czech repertoire, and a possible successor to Bělohlávek, whose memorial he conducted in Prague, but he's also very good in other material. Definitely a conductor to follow.

Please also read my article Smetana's role in the modernization of China   and many other posts on Czech repertoire, film etc.
at August 27, 2017
Share