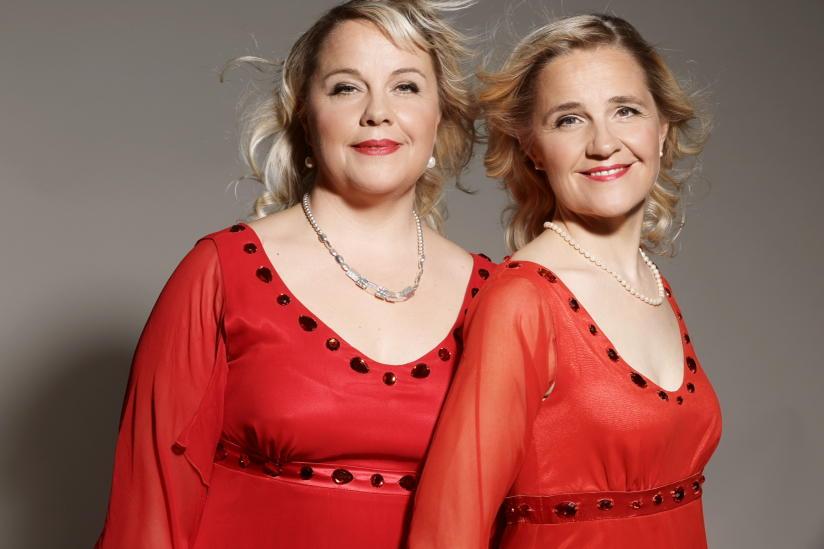 Esa-Pekka Salonen, composer, the subject of  the Total Immersion Day at the Barbican, London, in December,which came at a busy time before Christmas, and coincided with Suomi 100 celebrations. Too muchn to take in all at once. Fortunately the Salonen concerts are now on BBC Radio 3 (link here). A great opportunity to hear Salonen's Wing to Wing (2004) again with Anu and Piia Komsi, for whom the work was conceived.  The Komsi sisters are almost mirror images of each other: both are coloraturas of unusually wide range and vocal agility. They have an instinctive closeness to each other which other pairs of singers can't quite equal. Symmetry is part of the concept of Wing to Wing, so the Komsis can probably do it better than anyone else.  I heard the UK premiere of the work at the Barbican in May 2006. Over the years, the Komsi sisters  have done it so many times that they've grown into it as naturally as if they were part of the organism.
"Wing to wing" is a sailing term  which describes the way sails can  be aligned to maximize wind flow. As the wind changes, the sails move. The interaction between the free flowing breeze and the flat surfaces of the sails controls the movement of the boat. The vessel is sailed by this interplay between nature and machine. Wing to Wing is an "architectural" piece because Salonen employs sound to create a structure within which natural forces can flow. Thus the flurrying lines which suggest the movement of wind, water and light, circulating through the structure, modifying, varying and constantly changing  The architect Frank Gehry's disguised voice is embedded into the music, adapted so that it becomes part of the "building". The Komsi sisters' voices soar and fly, suggesting the sound of seabirds flying in the open air, the percussion below them perhaps representing the urban landscape, often twining as if in spirals. Sometimes their lines are long and searching, as if probing the dimensions of space around them.  And sometimes, the turbulence clears and stillness reigns, sparkling repeated notes against clean, clear woodwinds, before we descend into sonorous depths.  Music as sculpture, almost as tactile as it is aural.  I've heard Salonen conduct Wing to Wing and also Jukka-Pekka Saraste.  Sakari Oramo is different to Salonen, but very good because he has an intuitive feeling for the inherent richness of the piece, and the BBCSO now seem to have it in their blood.
More symmetry and spatial awareness in Salonen's Karawane (2013-14) where the BBC Symphony Chorus joined the BBC SO. Here the symmetry is processional : vaguely exotic timbres, suggesting a caravan weaving its way through some strange landscape.  Steady rhythms give way to swirling chromatic textures. The voices sing rareified cadences that rise and fall, like the movement of caravans pulled by animals.  Tempi pick up, and playful staccato patterns emerge - choppy vocal fragments against pounding brass.  A violin materializes, playing a strange melody, like the song of a sad siren, lost in the desert.  Textures thin out and the pure sound of a flute calls as if into the distance of the night. Rustling sounds, timpani thud ominously and the voices are strange low murmurs which lead to more frenzied passages where the voices shout "Way !".  Ostinato exclamations in the orchestra, which build up in speed, like an engine jerking into action. Through these changes of pace and rhythm, Salonen progresses the piece so its component parts move as if in formation.    A glorious ending, swaying and waving in wacky waywardness. Conceptually strong and a good piece, yet sparkling with wit and good humour.
Nicholas Daniel was the soloist in Salonen's Mimo II (1992) where the oboe "sings" with the winds and brass in the orchestra while the strings swirl round them. Slightly reminiscent of a Stravinsky ballet though the whimsy in the oboe part is quite distinctively Salonen.
at January 08, 2018
Share