Luciano Berio Sinfonia "For the unexpected is always with us" 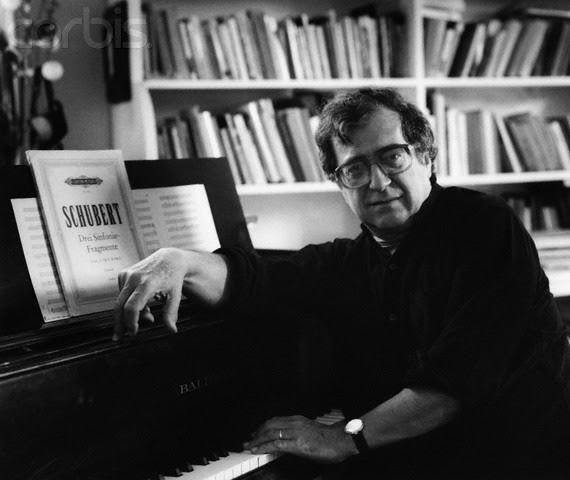 Luciano Berio, right,  with Schubert.  An apt point on which to start discussing Berio's Sinfonia (1968), a key work of modern times.  Today I watched again Frank Scheffer's film A Voyage to Cythera, which was ground breaking on first release. It remains fresh and challenging sixteen years later, an absolute must for anyone interested in the way artists absorb influences to enrich their own creative imaginations.  There are composers who do pick and mix, (one whom I shan't name) -- a symphony in one style, an opera in another, but being derivative is a dead end. Beware plagiarism, almost inevitably the mark of mediocrity.

Good composers internalize and learn. Cythera  in mythology was the home of the goddess of renewal and  regeneration.  Thus the film starts with shots of a strange primordial-looking landscape out of which arise strains of Mahler’s Symphony no 2, a "Resurrection" in the deepest sense.  Berio's Sinfonia is no mere collage but a  strikingly original new work that defies conventional ideas of what a symphony "should" be.

Berio describes the Sinfonia  as an "internal monologue" which makes a "harmonic journey". It flows, like a river, bringing in its wake the streams and springs which have enriched it, adapting them and changing them, surging ever forwards towards the freedom of the ocean.  Like Mahler himself, Berio was cerebral. Berio is seen in his study, surrounded by scores and books, with a model ship on display. Riccardo Chailly, also highly focused and erudite, talks about Stravinsky and Schoenberg, who, in their different ways, progressed the direction of modern music. Composers don't operate in "schools".  Schoenberg's great achievement was to opens tonality outwards so others could develop things further.  In Sinfonia, there are references to at least 15 different composers, some quite subtle. There's a  quotation from Don, the first movement of Boulez's Pli selon Pli (fold upon fold).  It's a "gift"  from one master to another, both of them fascinated by multi-dimensional levels and perspectives, ever-changing flurries and eddies.  Incidentally one of the best recordings of the Sinfonia was conducted by Boulez, who relished the wit.

"For the unexpected is always upon us"  as a phrase rings out clearly, illuminating the deliberately obscurantist miasma of the text, partly based on Samuel Beckett, though there are also phrases from
Claude Lévi-Strauss, the anthropologist of myth. The style is often almost conversational.  so you're drawn into what's being spoken, only to be confronted by something elusively confusing. You navigate, as on the rapids of a river, by paying attention and being intutitive,. Take nothing for granted:  meaning operates on many levels.  Once I heard an anecdote about someone who built a formidable machine that could invent music, electronically.  Along came Berio, who twiddled a few knobs and buttons and created something genuinely interesting.  He made real music by not being too up himself.

Berio had a quiet sense of humour. When he quotes Mahler's Des Antonius von Paduas Fischpredikt (read more here) , he knows the fish don't understand and will keep fighting. Perhaps Berio knew that some folk would never "get" Sinfonia, but so what as long as a few do.  Traditionally -- if that's a word which can apply to someone as lively as Berio -- the texts have been semi-spoken at odd pitches, using tuning forks and impossibly clipped British accents, which adds to the sense of quixotic unreality. At the end, the performers name and thank each other -- reality playing tricks with art. No performance of Berio's Sinfonia is ever quite the same, and you get something different each time.  "For the unexpected is always upon us".
at January 03, 2016