There seeems to be quite a vogue for huge concerts like these now, maybe to counteract the attention deficit of modern listening (which applies to many things, not only music)
at January 18, 2020 No comments: 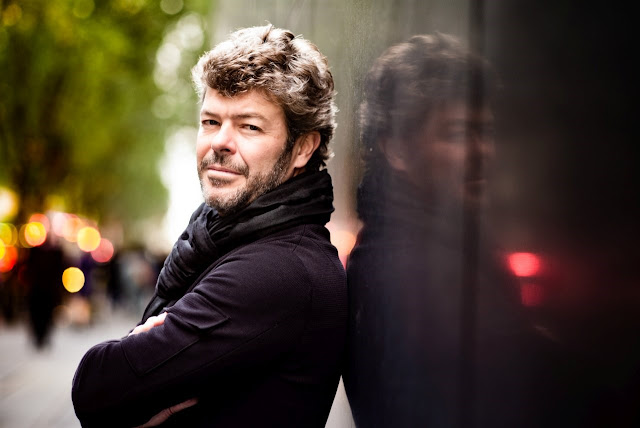 Manuel de Falla The Three Cornered Hat (El Sombrero des Tres Pucos) with Pablo Heras-Casado and the Mahler Chamber Orchestra streamed HERE. Pablo Heras-Casado came up through the ranks of the Abbado group of orchestras, of which the Mahler Chamber Orchestra is an integral part, and was mentored by Pierre Boulez. There's a video of  Boulez and the Lucerne Festival Academy with a very young Heras-Casado, still round with puppy fat.  Soon, Heras-Casado became joint director of the Academy beside Boulez. Since then, he's become a big-time international name, conducting everywhere at the highest levels. Yet Granada, his hometown, remains part of his identity. He headed for some years the Granada Festival of Music and Dance at which this performance was filmed in July 2019 in the grounds of the palace of Charles V in Alhambra.
Flamenco, and indeed most dance, depends on precision, energy and discipline, well suited to the very high standards of the elite Mahler Chamber Orchestra.  With Heras-Casado, this provides a foundation for a performance of extraordinary power, where the playing alone is so vivid that the music "speaks" without the need for dancers or staging, other than the backdrop of  the palace coutyard itself and the abstract video projections in the background, designed to reflect the architecture. Listen to the detail in this performance : castanets, trumpets, piccolos, clapping, their purpose sharply defined amid the passionate, swirling textures. As in Flamenco, single gestures matter, where directions can switch on sudden pivot points.  Heras-Casado reminds us that de Falla was a twentieth century composer, building on earlier traditions. He was a contemporary and friend of Stravinsky, and died as recently as 1946. The Three Cornered Hat was commissioned by Serge Diaghilev and choreographed by Leonid Massine in 1919, in co-operation wth de Falla and authentic Spansh dancers.  It's relatively late for a Ballets Russe production, and the flavour of the 1920's is in evidence.  It predates Ravel's Boléro by 10 years. 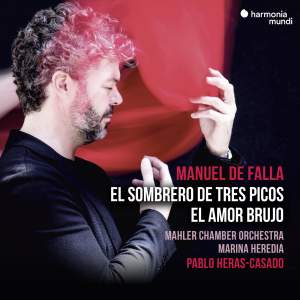 This wonderfully vivid performance, with  Carmen Romeu as soloist, follows on from Heras-Casado's recent recording, also with the Mahler Chamber Orchestra, of El Sombreo des Picos and El amor brujo on Harmonia Mundi, which was one of my favourites of 2019. I can listen to it again and again and still feel refreshed by its spotaniety and verve.  When it came out some said it was "too fast" and not "romantic" enough. Too bad !  This music isn't mean to be soft-focussed.  its a pity that listeners these days seem to approach music with a laundry list of preconceived assumptions rather than listening to what a composer might mean, or what a good performer can bring out in the music. It's the repertoire that counts !
at January 16, 2020 No comments: 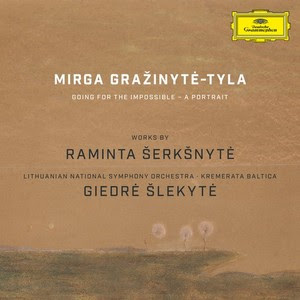 From Deutsche Grammophon, Mirga Gražinytė-Tyla conducts the music of Raminta Šerkšnytė with the Kremerata Baltica. In the four years since her appointment as Chief Conductor of the City of Birmingham Symphony Orchestra  was announced, Gražinytė-Tyla has established a significant presence. She  understands the long standing CBSO ethos of adventurous programming.  While many conductors would play safe with recordings of easily-marketable repertoire, Gražinytė-Tyla chooses repertoire which stretches boundaries.  In 2018, she led the CBSO in an in-depth immersion into the music of Mieczysław Weinberg, which resulted in one of the finest ever recordings of Weinberg's Symphony no 21, the "Kaddish" together with Weinberg specialists Gidon Kremer and the Kremerata Baltica.  Please read my review of that here.

In this new recording, she presents the Lithuanian composer Raminta Šerkšnytė. Though this recording may not have immediate mass market appeal, it is so unusual, so beautiful and so moving that it could, long term, prove to be a milestone in bringing the riches of Lithuanian and Baltic music to a wider audience.

The music of the Baltic region evolves from ancient traditions absorbed into the culture of the early Christian era, encouraging vocal and communal music-making. When Latvia, Estonia and Lithuania were incorporated into the Soviet Union, regional identities were suppressed, and music became a covert force against the regime. It's notable how music with a spiritual element survived repression :  Ustvolskaya and Giubaldina, Arvo Pärt and Veljo Tormis, Osvaldus Balaskauskas, Pēteris Vasks, Lutosławski, Miloslav Kabeláč and many others. Hence the Singing Revolution of 1987 and mass non-violent protest which ultimately led to independence. This spiritual element also connects to a sense of communion with nature and the environment. The bonus DVD that comes with this recording, includes a performance conducted by Gražinytė-Tyla of works by Bronius Kutavičius (b. 1932) inspired by ancient polytheistic belief and music in what is now Lithuania. Definitely worth listening to, as it sets context for the music of Raminta Šerkšnytė. Indeed, the whole video is worth watching for its insights into Gražinytė-Tyla's values and background.

"I want my music to compose a symphony from the roaring of waves, from the mysterious langauage of hundred-year woods, from the twinkling of stars, from our folksongs and from my boundless longing" wrote Mikalojus Čiurlionis (1875-1911) the Lithuanian composer, poet and painter. Šerkšnytė's Midsummer Song (2009) addresses the summer solstice,  the longest day and shortest night in the calendar, which has ritual significance in many cultures, as it marks the passage of seasons and of time itself.  Thus the "gossamer melodies alternating between major and minor , evolving step by step into a wealth of colours and forms", as Verena Mogel notes, "....a multi-layered, finely structured fabric in which the overlapping and contrasting layers of strings never lose their coherence.... a consistent, dramatic arch unfolds from beginning to end, a constant alternation of tension and relaxation, the singing of isolated voices and dense textures". The effect is mystical, as if the music were tapping into some deep source of earth-magic. Brief figures might represent specifics, like birds, or wind,  but this is an inner landscape of the soul : much deeper than tone poem.   Listening to this can clean away the superficial clutter of noise that surrounds us. For me, it is an  immensely rewarding and uplifting experience.

Šerkšnytė's De profundis (1989) takes its cue not so much from  Psalm 130 but from the storms and turbulence of youth, perhaps a necessary rite of passage before the coming of wisdom. Hence the shifting tensions, formed by "fretful, 18 note motifs interspersed with rests which hover above downward spiralling glissandi in contrast with almost motionless chord progressions in which dissonances resolve again and again into harmonic clarity".  This was the piece which earned Šerkšnytė her bachelors degree, but it is by no means a "student" work.

Based on the poetry of Rabindranath Tagore, Šerkšnytė's Songs of Love and Death (2007) is structured along the lines of an Indian raga, evoking emotional states of mind as much as the themes of day, evening, night and dawn in the text.  In the first movement, "Diena, Vakararas" (day, evening)  textures hover creating an impressionistic palette of delicate colour, highlighted by exotic-sounding percussion and woodwinds.  A free-flowing sense of calm prevails, from which the soloists’ voices arise, their lines like incantation, gradually building up to form a chorale as intricate as tracery.  In "Naktis" (Night) a solo violin sings, elaborating on the themes of the previous movement. The choir picks up the themes, their lines hushed, undulating and diffuse, providing a backdrop to the two pairs of soloists (Lina Dambrauskaitė, Justina Gringyte, Tomas Pavilionis and Nerijus Masevičius) who sing of love and longing. The brief orchestral interlude marks a transition.  The woodwinds create fluttering bird-like figures, which illustrate the references in the text to a dawn chorus followed by the sudden flight of birds. "Rytus. Amzinasis rytas (Morning. Eternal morning) marks not just a new day but a leap into an altogether new level of transcendence.  The soloists sing, united in ensemble and as individuals interacting, the choir intoning behind them. As the emotional flight takes off, the voices gradually recede into space, the orchestra returning to reverent serenity. Giedré Slekytė conducts the Lithuanian National Symphony Orchestra and the Vilnius Municipal Choir (Jauna Muzika).
at January 11, 2020 No comments: 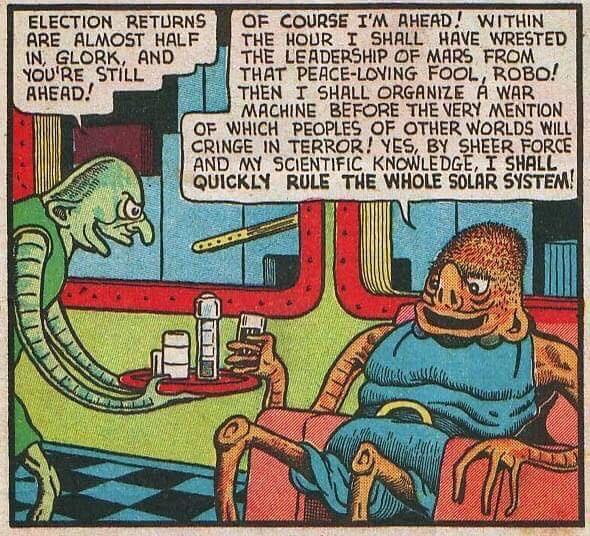 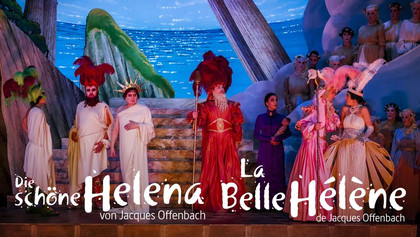 "À l'Opéra de Lausanne, l'extravagant Michel Fau s'empare du plus populaire des opéras-bouffes de Jacques Offenbach dans une mise en scène très attendue, chaussant pour l'occasion les sandales du roi Ménélas". Gloriously sumptuous yet also witty - Offenbach La belle Hélène in a new production by Michel Fau now available for a short period on arte.tv.This   is opéra-bouffe as it should be done - with wit, extravagant and idiomatic verve. As one would expect from Michel Fay, who is unique - not only an actor, but one with extraordinary musical affinities, who can bring out the music in spoken text, so it picks up on the musical logic - not Spechstimme, but declamation that accenntuates the musical line. When he narrates - such as in the recent F X Roth Berlioz Lélio, (please read more here), he makes the text fit so well with the orchestra and singers that it's hard to go back to listening to non-text or non-idomatic performance.  Fau is also a theatre historian, extremely well infomed about the performance style and ideologies in French music and theatre.  This production, lit in gold and jewel tones is audaciously indulgent, and the performances are vivid, too.  Do not miss this - it's fabulous, in every way ! (cast list and credits in the link).

Email ThisBlogThis!Share to TwitterShare to FacebookShare to Pinterest
Labels: Fau Michel, Offenbach
Newer Posts Older Posts Home
Subscribe to: Posts (Atom)
Copyright Disclaimer Under Section 107 of the Copyright Act 1976, allowance is made for "fair use" for purposes such as criticism, comment, news reporting, teaching, scholarship, and research. Fair use is a use permitted by copyright statute that might otherwise be infringing. Non-profit, educational or personal use tips the balance in favor of fair use. Wherever possible i quote source, I don't claim ownership of what's not mine. WARNING :if you want to copy my work add credit and a link to my url, the original.