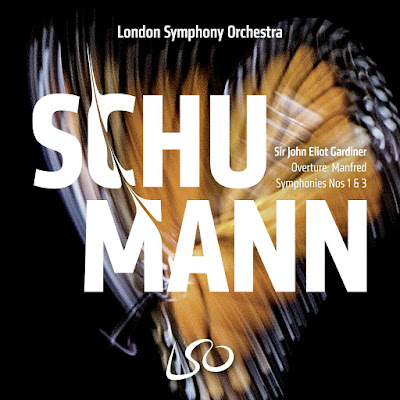 John Eliot Gardiner's Schumann series with the London Symphony Orchestra, from the Barbican Hall, London in 2019, now available on CD. This recording captures the verve and spontaniety of live performance, which further enhances the vividness of expression.  Schumann's Symphony no 1 in B flat major,Op. 38, (1841) and his Symphony No. 3  in E flat major, Op. 97, (1850), together with the Overture to Manfred Op. 115 (1848). (For my review of Schumann Symphonies no 2 & 4 with Gardiner and the LSO, please see here)

Following on from Gardiner's Mendelssohn series with the LSO, this Schumann series presented Schumann as Early Romantic, his sensibilities shaped by Mendelssohn and Weber.  In the last few decades, the assumption that Schumann's orchestrations were "inept and clunky" and needed "fiddling and re-touching", to quote Gardiner, has long since been refuted, as musicians and audience have come to appreciate Schumann on his own terms, demonstrated by the number of performances and recordings in recent years inspired by this fresh approach. Gardiner's Schumann series with the LSO is significant because, more than most conductors, he comes from a background immersed in period style and aesthetics.  The London Symphony Orchestra doesn't use period instruments, but that in itself means much less than their understanding of the aesthetics of informed perfomance practice.

Having established his reputation as a composer of music for solo piano, Schumann turned to works for voice and piano, influenced in no small part by his marriage to Clara.  The glorious outpouring of his Liederjahre  saw the creation of masterpieces like Dichterliebe, where individual songs form a larger work internally connected by theme and form.  Appreciating Schumann's Symphony no 1 in this context helps us appreciate him as symphonist. The associations with Spring aren't merely descriptive, but may refer to the Early Romantic symbolism of Spring as purity, simplicity and the freshness of Nature. In four movements, the symphony is "classical" though the spirit is distictively individual.  The exuberant fanfare follows speech rhythms,  quoting a line from the poet Adolf Böttger, "Im Thale blüht der Frühling auf". The andante picks up to vigorous allegro molto vivace, ending with emphatic affirmation. This accentuates the restraint of the second movement, which briefly had the title "Evening".  The scherzo repeats the fanfare, this time more earthy, highlighting the charm of the two trios. "The fanastic, mercurial humour of Schumann's great solo piano cycles", says Gardiner, "is here recreated brilliantly in orchestral terms". The final movement quotes Schubert's C Major symphony, the "Great", whose manuscript Schumann had uncovered in Vienna in 1838, but, as Gardiner says, the slow horn and flute cadenzas are pure Schumann "and for a moment it seems a new world of magical possibility is opened up".

Gardiner's approach to Schumann's Symphony no 3, the "Rhenish", also brings out the connections between the symphony and Schumann's many songs, even more so than in the First Symphony. Given the central position of song in Schumann's ouevre, his sensitivity to poetry and visual images and his very personal identification with the Rhine, it is wise not to underestimate the song aspects of this symphony.  Indeed, one could suggest that Schumann's Third inhabits a place from which we can consider his search for new forms of music theatre, evolving from oratorio Das Paradies und die Peri  (Op 59, 1843) (please read more here) to Genoveva (1848)  (read more here)  an opera that is more Weber than Wagner.  Is Schumann 3 song in symphonic form ? John  Daverio, the most intuitive of Schumann scholars, felt that text was integral to the music far more deeply than in the sense of word-painting. Schumann liked the shape of syntax, the rhythms of declamation. Schumann's music drama is only "difficult" if we expect it to evolve like Wagner, with conventional narrative. Instead, it's closer to abstract, conceptual art. In this performance, Gardiner and the LSO illuminated the colours, evoking the magic of the worlds of Weber, Mendelssohn and Singspiel tradition.  Lightness of touch, and freedom, are thus integral to interpretation.

Schumann's Symphony no 3 was inspired by an interlude of great happiness, when Robert and Clara took a holiday along the Rhine, both of them acutely aware of its symbolism and place in  Schumann's songs, such as "Berg’ und Burgen schaun herunter" from Liederkreis op 24, and the verse, from Heine :
"Freundlich grüssend und verheißend
Lockt hinab des Stromes Pracht;
Doch ich kenn’ ihn, oben gleißend,
Birgt sein Innres Tod und Nacht.!"

In a sense Schumann's third symphony is almost autobiographical, as if the composer were looking back at the high points in his career.  Gardiner and the LSO articulated the sparkling figures in the opening movement so they flowed, like a river, sunny but with darker undercurrents hinted at in the strong chords in the second theme, and the quieter passages in its wake. This coloured the second movement, suggesting the scherzo qualities behind the surface. There are echoes of folk dance, evoking the vigour of peasant life, but Schumann doesn't tarry. Bassoons, horns and trumpets called forth, the movement, ending on an elusive note.  The movement marked "Nicht schnell" was gracefully poised: as an intermezzo it connects the happiness of the Lebhaft  movement with what is to come. The solemn pace of the fourth movement marked "Feierlich" may describe a ceremony the Schumanns witnessed in Cologne Cathedral, but its musical antecedents can be traced to other sources, such as the song "Im Rhein, im heiligen Strome" from Dichterliebe.  The size of the cathedral, and the reverberations within it are suggested by the figures (trombones, trumpets, bassoons) which stretch out as if filling vast spaces. With Gardiner's clear textures the motif suggesting a cathedral organ was very distinct.  Whateverv the movement may or may not mean, the muffled horns and brass fanfares evoke a power that is very far from the insouciant quasi-folk tunes that have gone before. Yet Schumann concludes not with gloom but with a reprise of the sunny Lebhaft, the emphatic chords even stronger than before, this time lit up by a glorious fanfare, the brass shining above the strings below. The very image of the Rhine surging past towering mountains. Since we now know of Schumann's suicide attempt, this adds depth to our response.

Gardiner and the LSO make further connections by pairing Schumann's Third with his Overture to Manfred. In Byron's poem, Manfred is doomed, "half dust, half deity" driven mad by some unknown guilt, possibly incest, which in Byron's case may have been true. To German readers, there would have been echoes of Goethe's Wilhelm Meister.  Schumann's emotional extremes had been apparent at an early age, and his sister had committed suicide in her youth. Mendelssohn, whom Schumann revered, had died in 1847 while still in his prime. The Overture begins with majestic upward chords, rising like mountains, quintessential Early Romantic symbols on many levels, undercut by plaintive woodwinds and strings. As Gardiner points out, "the dark key E flat minor is particularly challenging for strings, yet the sense of strain this creates adds to the intensity".  Schumann's orchestration is so well defined that, in the eleven minutes of the Overture alone, he captures surging turmoil and psychic upheaval.
at January 28, 2020