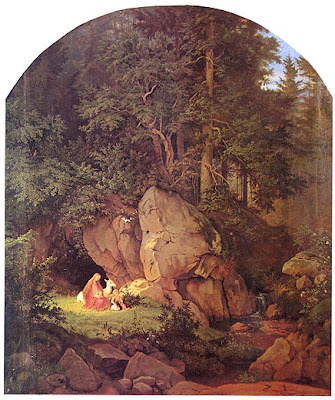 Everyone knows Schumann's Genoveva Overture, but those who know the full opera can hear it as the missing link between Weber and Wagner. The full opera isn't a rarity but it has a reputation for being "unstageable", so get to the performances put on by University College Opera at the Bloomsbury Theatre in London this week.

THIS is the absolute top recording, from 1976. Kurt Masur conducts the Gewandhausorchester Leipzig. Soloists are unsurpassable. Peter Schreier as Golo, Edda Moser as Genoveva, Dietrich Fischer-Dieskau, Seigfried Lorenz, and Seigfried Vogel. This is a true classic. The performance are exceptionally vivid, fresh and passionate. Their enthusiasm makes a case for this wonderful opera.

Genoveva is a virtuous woman who is set up by Golo, a villain who's in love with her. Magic is involved, too. Golo's friend is Margaretha the witch. Genoveva ends up living in the woods with her baby son Schmerzenreich (rich with sorrow). She's so gentle that the animals look after her. The painting above by Adrian Ludwig Ritter was painted in 1841, so is from Schumann's time (it's on the cover of the Masur recording).

The story itself is ancient, but significantly, Schumann, rejected tradiiional, sentimental texts for a text by Freidrich Hebel, written in 1843. Schumann started the Overture in 1847, completing the opera in 1848, right in the midst of the Revolutions of that year. Wagner was on the barricades in Dresden. While Schuman hid away in the countryside, his manifesto was his music. As Hebbel had said, "Any drama will come alive only to the extent it expresses the spirit of the age". Like many original things, it wasn't all that well received. Not long after, Schumann became ill and Genoveva fell out of fashion. But forget fashionable assumptions and listen to the music itself (especially the Leipzig recording).

The Overture sets the stage, introducing the themes that will be developed more fully in the opera. It's marvellous, but listen to how it zooms into a chorale, and then into the opera proper, rather like successive proscenia in a theatre add depth to a flat stage. Schumann's doing dramatic perspective with music.

Think of the colours in orchestration: "golden" shining trumpet fanfares, dense textures that suggest dark forests and shadow. Magical sweeping strings, sudden twists and turns. When Genoveva's husband Siegfried goes off to war, we hear pipes and drums, perhaps even galloping horses. There's so much in this music that it's a shame to recreate it literally: no one comes close to Schumann. Your imagination, in any case, will provide more than can be practical in live performance.

Yet don't be seduced by the gorgeous surface. The central dynamic in this opera is between Golo and Genoveva - good and evil. Peter Schreier's Golo is wonderful, because he's so bright and intense, you "feel" that Golo isn't a one-dimensional stock baddie, but a much more complex person - a Romantic hero gone wrong, a pre-Wagner hero, even. What happens to Genoveva is savage, but she's steadfast and survives because she has integrity.

Schumann's vocal balance is superb - soprano, mezzo, tenor, baritone, bass. solos and choir. This makes the interactions move swiftly. The duets and trios are specifically clear : no fudging, every word each character sings is meant to be heard. The choral writing is more uniformed (sometimes they're singing as soldiers) but combined with that wonderfully rich orchestration, it's fabulous. Auf, auf in das feld! could come from Lohengrin. Then Schreier sings alone, Ich bin allein, with minimal woodwind accompaniment: a crazed swan-hero emerging from the mist. Genoveva and Lohengrin were both premiered in the summer of 1850.

This "Elsa", though, is tougher than she seems. The vocal writing is beautiful, ometimes using the full range of the fach in a single aria. Genoveva and Golo have confrontations, yet they're equals: listen to the duet Wenn ich ein Vöglein wär. It's an old folk rhyme, but Schumann has both voices sing with equal force, first in unison, then in diametric opposition. Edda Moser's voice is light, but firm, a good foil for Schreier's adamant intensity.

Then, the finale of Act 3 in which the murdered Drago's ghost appears is scored with sprightly whips of sound (both orchestra and chorus) that vaguely recall the Wolf Glen in Der Freischütz. When Drago appears (Vogelm intoning malevolently), Schumann's audiences knew the cue. Margaretha's so scared, she tells Siegfried the truth about her scam with Golo. Gisela Schröter sang Kundry quite frequently, so this informs the way she develops Margaretha, whose part warms after this point. She's redeemed.

Edda Moser's long aria Der letzte Hiffnung schwindet is a tour de force, demanding for even the most experienced singers. Genoveva makes simple goodness an act of strength. Somehow a singer has to portray purity with great resourcefulness. Perhaps Genoveva is a symbol of unsullied national spirit : Germany was still split into dozens of principalities, some ruled by autocrats. Schumann read (and wrote) newspapers, he knew the spirit of the times. This makes the plot much more than mere fairy tale. Times may have changed, but the idea still applies, all over the world where there's power politics and scamming. There's nothing undramatic in that.

In a way it's sad Genoveva ends up subordinately submissive to Siegfried, a rather one dimensional nobleman. Fischer-Dieskau does noble like no-one else so perhaps it's not so bad.

The real tragedy is that Schumann did not live long enough to write more. Genoveva was his first attempt at opera. Das Paradies und die Peri and Szenen aus Faust are experiments, and should be respected for that, not dismissed as misfires. We know from his songs that Schumann understood writing for voice, and we know from his symphonies and chamber music, piano and other works that he had a much wider range than Wagner. He read more, too. What might he have achieved had he had continued writing after the age of 44? Many composers haven't even found themselves at that age.

So it's time to give Schumann the respect he is due, and value Genoveva for what it is. Towards the end of Genoveva, Golo sings Kennt ihr den Ring? Your heart skips a beat because you wonder what Schumann might have done had he lived longer.

Read a more detailed review HERE in Opera Today. Get the CD HERE
at March 22, 2010