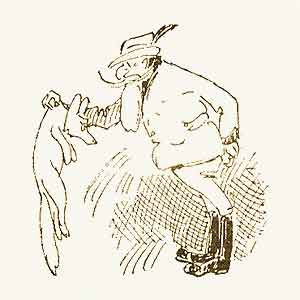 In 1916, Janáček found inspiration from his local newspaper Lidové noviny. It ran a series of fragments, supposedly letters found torn from the diary of a young man who suddenly left home and vanished. Later it was revealed that the story wasn't news but creative fiction, but it inspired the masterpiece, The Diary of One Who Disappeared, which was a major tuning point in Janáček's creative life. In 1920, the newspaper published a serialized novel which became the opera The Cunning Little Vixen.

The novel "Vixen Sharp Ears" was written by Rudolf Tĕsnohlídek whose personal life was ao gruesome no-one would believe it if it was a work of fiction - three dramatic suicides, three marriages, two murder trials. So the pastoral whimsy of The Cunning Little Vixen has darker undertones.

The novel was illustrated by Stanislav Lolek, who was also well known as a formal painter. So right from the start the visual impact of the story connected to these simple, open-ended line drawings. To our eyes these drawings seem unremarkable. But cartoons in those days were fairly closely drawn : Lolek's work must have seemed daringl modern at the time, barely more than rough sketches. So perhaps their vivacity and freedom has a bearing on the opera and how it's performed.

There are lots of clips on youtube of The Cunning Little Vixen, and photos everywhere of past productions. Th 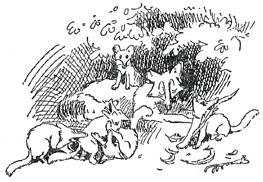 ere are even animated versions, pushing the "cartoon" idea further, which isn't so bad: the story is magical, and why shouldn't kids (and adults) enjoy 20th century opera? I'm very fond of Vaclav Neumann's Janáček, so was thrilled to find clips of him conducting Vixen in 1954 in Berlin at the Komische Oper. Orchestrally it's superb - Neumann really gets the sparkling, electric quality in the music. The singing is very bright and crisp, an excellent performance. The singers wear animal costumes and hop about on all fours in dense undergrowth. It's so cute!

But the opera doesn't need to be realistic. After all animals don't sing. The Cunning Little Vixen is beautiful because it's magical, a world of imagination. Alas, the owner of these clips doesn't want them embedded so you'll have to buy the DVD or go to his links. Here are the links -Part 1 and Part 2. Enjoy! Someone has mailed me . He has the whole film so he's giving me a chance to see it ! will report. Please also see my piece on Janácek's dangerous Women which shows the Vixen as one of Janácek's many feisty women characters and what they might mean. (LOTS of Janácek on this site)
at March 18, 2010

Email ThisBlogThis!Share to TwitterShare to FacebookShare to Pinterest
Labels: Janacek