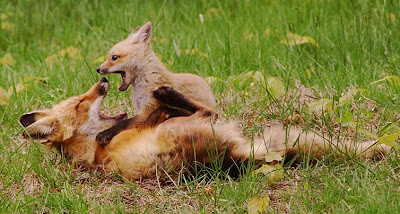 Bill Bryden's production of Janácek's The Cunning Little Vixen at the Royal Opera House, London is 20 years old and has been seen with much starrier casts. This time, the emphasis isn't on celebrity names but on the opera itself, which is no bad thing at all.

The set comes into its own, too. William Dudley's designs astutely reflect concepts in the music: huge revolving circles and ellipses, reflecting circular forms in the orchestration. Sharp spikes emanating outwards, like crackling staccato. Characters spin, slide off uneven surfaces, and fly through the air - just like the movement in the music.

Don't expect naturalism. Janácek may be writing about forests and peasants but he's definitely not being folksy or bucolic. Some of the jokes are surreal. There are references to "making operas and novels". Even the old dog is a composer, and we know who! When the Fox and Vixen do what nature intends, horrified onlookers demand they get properly married, first. It's a cue for Janácek to throw in some of his wonderful choruses, which Bryden has materialized in the corners of the auditorium, further breaching the boundaries between stage and audience.

The Cunning Little Vixen is about nature, but the animals in this wild-life documentary are human. Janácek's recurring theme is that sex is natural, and celibacy unnatural: the schoolmaster is a withered old stick, surrounded by a forest of living trees. Even now that topic would be daring. In the 1920's it had to be camouflaged discreetly.

Janácek's startlingly modern in other ways, too. "Do you smoke?" asks the Fox of the Vixen, hopefully. "I do like a modern girl". The Vixen is independent and liberates herself. The hens cannot comprehend and cluck disapprovingly. "We don't need men", cries the Vixen, felling the rooster in one swoop.

In a forest lurks danger. The Gamekeeper's job is killing foxes. Submerged in the greenery are mechanical traps. The Fox and Vixen warn their cubs, but they're no match for the Gamekeeper's gun (which woke a sleeping child in the stalls, who burst into tears).

Nature takes its course. When it's time for the Gamekeeper to die, he returns to a glade where he was once young, but the animals have changed. "You have your mother's eyes," he tells a cub. The old Fox and Vixen are long gone, but Nature is a cycle that renews itself. It's a little misleading in this production that the Gamekeeper joins hands with the animals when he dies, but it reinforces the idea that men and animals aren't that different, and that reproduction means survival. Again the set design is prescient, with its images of spokes and rotating wheels.

Understanding Janácek's motivations gives clues as to performance practice. The Vixen's name is "Sharp Ears", so think pointed, alert, constantly questioning and vigilant, like a wild animal. Listen to the clues in the music - edgy staccato, sudden whips that leap above the stave, wavering haziness that reflects the magic in the tale. There's a huge case to be made for hearing Janácek as "modern", like Bartók. Indeed, even more so, for Janácek's recurrent theme is freedom, breaking away from boundaries and received convention.

Huge applause for Sir Charles Mackerras because he's a pillar of the establishment and so closely associated with this composer. Orchestrally, though, this was fairly straightforward, but Mackerras's Janácek is so familiar, he doesn't need to prove anything. Incidentally, London has great claims on Janácek tradition, with early champions like Rosa Newmarch, George Szell, Břetislav Bakala and Rafael Kubelik, who decades ago conducted Janácek in this very pit.

So this revival turns the wheel again, this time with a fresh crop of singers. Christopher Maltman is an authoritative Gamekeeper, especially towards the end, when the character grows old and reflective. His last scene was very moving. Emma Matthews was a good Vixen. Special credit to Elisabeth Meister, who stood in as the Fox at barely a day's notice. She's charismatic, a born actress with genuine presence, particularly as she's very young and still a Jette Parker Young Artist. Definitely a debut to remember.

The rest of the cast performed with enthusiasm rather than finesse, but that is no demerit. The Cunning Little Vixen is meant to be sung with gusto, so raw edges are better than overly polished conservatoire aesthetics. These are "wild" animals after all, and that is part of their charm. Which is the whole point Janácek was making. Be natural, be free.

Please see my other pieces on Janácek - lots of them - especially on the significance of Janácek's women and their relation to performance practice. Tomorrow (Saturday 20th), there's a broadcast on www.bbc.co.uk/radio3 of From The House of the Dead, Salonen conducting. (from the Met) photo credit : John Harrison
at March 20, 2010

Email ThisBlogThis!Share to TwitterShare to FacebookShare to Pinterest
Labels: Janacek

What a marvellous account of a very happy evening - certainly a memorable debut for Elisabeth Meister. As for the child in the audience, though, I'd assumed the wail was distress at the death of the character with whom she might most identify (and the audience's slightly nervous laughter an adult echo of the same reaction).

She was good ! I was quite near the kid who cried. He was fast asleep and wailed but went back to sleep right away. His 15 seconds of fame. It kind of killed the pathos of the moment of the Fox's death, but that's OK - other performances to come. I think most people thought it was cute when the kid cried, because it was so innocent. In fact it extended the idea that there's no barrier between stage and life.