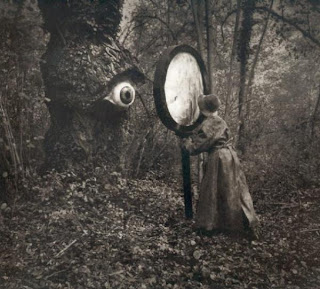 "If anything", said Philip Langridge in 2008,"Birtwistle’s music has become more impressive with time".  "He writes mathematically, in the way Bach writes mathematically, but with great emotion. To sing Birtwistle," he adds, "you have to understand the ‘maths’ first, to get the figures right, to get the intervals right".
To get the intervals right, to respect the silences....... an apt description of Birtwistle's mature work. The Nash Ensemble celebrated Sir Harrison Birtwistle's 75th birthday at the Wigmore Hall, London with a well balanced programme of his music with two premieres, an Oboe Quartet and the UK premiere of Elliott Carter's Poems of Louis Zukofsky (2009)
Framing the two new works with two older pieces was a good idea, because that linked past to present.  Five Distances for Wind Quintet shows Birtwistle (1992) in a cheerful mood. A horn in a wind quartet? Formality is scuttled, the horn chasing and distorting the more conventional wind ensemble. "A fox among chickens", says Stephen Pruslin.  The Oboe Quartet is more open ended. It's not complete, which is rather fun, because you have to use your imagination. The two outer movements are symmetrical and the unfinished middle movement, barely sketched here, may be freer and more improvisational.  Long, searching chords on flute and oboe mix with short, sharp interjections: bass plucked like a giant lute, violin strummed like a guitar.  Because it's incomplete, there's a sense of "tearing" that's appealling. It reminds me of Wolfgang Rihm's "fragmentization"


Which is why it goes well with The Woman and the Hare (1999).  Again, there's a dichotomy between form and freedom. The reciter (Julia Watson) intones  text in notated speech, while the soprano (Claire Booth) sings long arching lines : words barely connected by grammar, crystallized as images. "Moonrise ....landscape awash with dead white light". David Harsent's text is understated, its meaning elusive, coming from the odd pulse and silences as much as from the words.


Two voices, then two flutes. In Duets for Storab (1983) Philippa Davies and Ian Clarke interact like aspects of nature, birds perhaps, or even eddies of wind. (which is what flutes do) This feels like "earth music", as if it composed itself without human intervention, yet it's beautifully shaped.

Elliott Carter's Poems of Louis Zukofsky takes the idea of silence even further. The poems come with a stern warning that they must not even be quoted without express permission.  How then to comment on Carter's setting? The poems are minimal. Single, disconnected words spread loosely across the page, which Carter sets extremely sensitively. His music incorporates silence, that speaks just as the blank spaces in the poems are part of their essence.  Maybe the Zufofsky estate will try to make money out of silence. Sorry, but it's anti-art, to know the price of everything and the value of nothing.


To conclude, Birtwistle's Tragoedia (1965). Tragedy is misleading in a way because there's too much wit in the piece to be gloomy. In the centre sits the harpist (Hugh Webb) acting as gate keeper between the 5 winds and 4 strings. Sometimes the flautist doubles as percussion, beating a small wooden block, marking the passage of time, perhaps. The harp's also a stringed instrument, so there are patterns within patterns in this meticulously choreographed piece. More symmetry. Just as the concert began with two pieces that pit formality with freedom, Tragoedia uses the idea of a processional march but enlivens it.  The piece  pivots on the harp, and ends with the same 4 note sequence which framed the various segments.

Please see many other pieces on Birtwistle on this site
at March 25, 2010