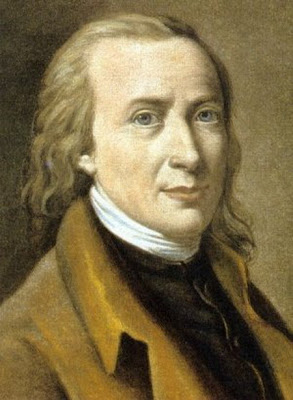 This second of two recitals of Schubert songs by Matthias Goerne and Helmut Deutsch at the Wigmore Hall showed the range of Schubert's interest in the poets of his time. This programme was brilliantly put together by someone who really knows the inner dynamic of Schubert's music.

Starting a recital with An die untergehende Sonne was daring. Immediately we're thrown into darkness. "Immer tiefer, immer leiser, immer ernster". The text may be peaceful, but the dizzying descent in the piano part hints at something more unsettling. Without a break, Goerne launched into Der Tod und das Mädchen. The tolling prelude makes it clear this "sleep" is death. The poet is Matthias Claudius, pictured here, but the concept goes right back to the Middle Ages, It permeates Schubert's aesthetic.

The theme recurs in Die Rose and Viola. Note the contrast between the two poems and Schubert's settings. Die Rose is a poem by Freidrich von Schlegel. It's beautifully, concisely written. The first stanza in particular scans so tightly, it's like music: no wonder Schubert was drawn to it. It's such a good poem, it's a joy to read and savour word by word. Schlegel covers a wide range of images in a few brief lines. Goerne respects each word, colouring and shading with nuance, so the rose comes alive in sound, before it slowly fades away.

In contrast Viola, to a poem by Schubert's rakish friend Franz von Schober. "Schneeglöcklein" runs the refrain. Six verses down the violet awakes. Seven stanzas later she flees "von der tiefsten Angst verfleischt". The violet's come out too soon and is frozen. Silver bells, bridegrooms, flowers anthromorphized so cornily that even Disney might cringe. Even Schubert struggles to make sense of the endless verses. Both Schubert and von Schober would have known Goethe's poem Das Vielchen, and Mozart's setting. Strophic ballads don't have to be maudlin. Goerne makes the song believable by singing without excess ornament. After Die Rose, it's hard to take Viola. It's a measure of Goerne's skill that he can pull it off.

Another very intelligent pairing : Auf dem Wasser zu Singen and Der Zwerg. Both songs describe death on the water, but in sharp contrast. In the former, Schubert's melody dances delicately, so you can almost see the schimmernden Wellen as the boat gently glides on the lake. Don't be lulled. The little boat is a metaphor for the passing of time. The poem, by Friedrich Graf zu Stollberg-Stolberg ( double barrelled prince) is altogether more sophisticated than the shock horror gothic in Der Zwerg. which ends in suicide-murder.

Matthäus von Collin's poem isn't bad, though. Rather than being a subtle mood piece it's a saga in miniature. The dwarf and the queen have a long, complex history. She willingly accepts being murdered, even absolving the killer. It's pretty kinky. Schubert doesn't exaggerate the lurid colours, though his setting is dramatic. This song is always a show stopper, it's so good. Again, Goerne doesn't give in to pathos, his singing giving the dwarf dignity and respect. That last line, An keiner Küste is so chillingly sung that Goerne hints that the real horror is yet to come. The dwarf might not escape in death, but be cursed to sail forever on the lake, trapped in time.

But as usual, Goethe gets the last word. Pairing An die Entfernte with Ganymed brings out another dynamic in this extremely well planned programme. The first ends with the plaintive call O komm, Geliebete, mir zurück, and the second contains the soaring phrase Ich komme, ich komme ! Wohin? Ach, wohin? Schubert emphasizes the significance of this phrase by setting it "in high relief", pauses on either side to accentuate the arc in the line. And then, hinab strebt's 's hinauf!, Goerne's voice lifting upwards, impressively. He catches the impatience in the song - Mir! Mir! and Aufwärts!. The stillness that prevailed before is now blown away by urgency. Just as the concert began with the downward spiral of An die untergehende Sonne, it ended with energetic animation, thrusting upwards.
at March 03, 2010

Glad to see that we both chose the second Goerne/Deutsch recital. I could easily have opted for the first, but the second, I think, was finer still.

Agreed about Mahler. Though there has been plenty this year, none made my list. We can but hope for the continuig deluge next year...