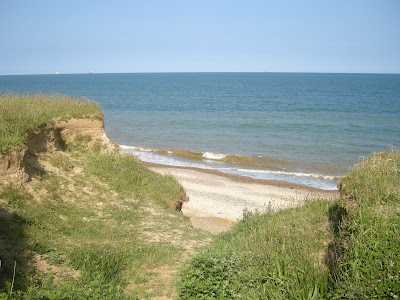 FOR REVIEWS OF CONCERTS please follow link "Aldeburgh 2010" on right, or use searchg facility. Lots on related topics, too.

Booking's already well under way for this year's Aldeburgh Festival. This year's big opera is George Benjamin's Into the Little Hill, seen last year at the Linbury Studio at the Royal Opera House.

This time it will be paired with Luciano Berio's Recital 1, instead of the rather oppressive Birtwistle piece heard in London. Berio's Recital 1 is more in tune with Benjamin's magical world, where whimsy and horror combine. Read about Into The Little Hill by following the link above - it's a masterpiece. Recital 1 is every performer's nightmare. The singer starts a recital but the pianist has disappeared! So she improvises....

Those who have seen Into The Little Hill will want to hear it again, especially with Berio, but be warned, it clashes with Rumplestiltskin, the Birmingham Contemporary Music Group's smash hit (seen in Birmingham and Huddersfield) performed at the Spitalfields Festival in London. You could wait for the next weekend's performance but that clashes with the first night of Idomeneo at the ENO.

Pierre-Laurent Aimard plays the big First Saturday Night concert with Bach and Benjamin's transcription of the Canon and Fugue from Kunst der Fuge. Piano fans must book this weekend: Leon Fleisher plays the Sunday concert. Fleisher suffered neurological damage in the 1960's. Gradually he regained the use of his left hand, but the crisis let him blossom as teacher and conductor. He's giving a masterclass, too, which should be good.

There's a film about Fleisher too, because one of the major themes of this year's Aldeburgh Festival is "Music and The Brain". This sounds fascinating. Lots of different talks, concerts and films about the way the brain processes music, and fuels the creative process. One is about synaesthesia, backed with a concert featuring (of course) Messiaen and Scriabin.

Alfred Brendel's back, too, giving a talk on the theme "Does classical music have to be entirely serious?" Everyone who's heard or read Brendel knows this will be more intelligent and more original than most. Royal Philharmonic Society take note!

Very unusual indeed will be the event on 20 June when Aimard and a neuroscientist will explore how the brain allows two hands to move in contrary motion. Can we adapt to ambidextrous skills? A stimulating programme not only for pianists, I think.

There'll be a workshop on "Togetherness" about how chamber ensembles communicate. Motion-capture technology will show how players relate to each other by many complex social and musical interactions.

More brains too the second week. Pierre Boulez and members of Ensemble Intercontemporain talk with Aimard and play works by Boulez and Elliott Carter. The next day Aimard and Thomas Zehetmair play Mozart, Schoenberg and Boulez. June 26th is the Big Day, when there'll be two concerts with Ensemble Intercontemporain, with Boulez conducting. Guess what? The world premiere of Elliott Carter's What are Years? Carter should know, he's 101. Plenty more Boulez music this week, and George Benjamin, too. And this being Aldeburgh, new music is interspersed with early music - Exaudi and the amazing polyphony of the Huelgas Ensemble and Bach Mass in B Minor (Monteverdi Choir and JEG).

Plenty of respect too for the Aldeburgh tradition of musicians-as- Directors. There's a big feature on Peter Pears and concerts of music by previous directors, such as John Woolrich, Thomas Adès, Oliver Knussen and of course Benjamin Britten himself. This year's festival is the best I can remember because it's uncompromisingly UNsuperficial : top quality music, placed in relationship to life and original thinking. Definitely not dumbed down but all the more fun for that. Wonderful programmes this year - make the effort and be rewarded. This 63rd Festival is so good that it is worth travelling a long way to get to. Click on photo to enlarge for detail. It's a cliff near Aldeburgh. The coastline there often crumbles : now you can see WHY Peter Grimes's house became dangerous. Britten knew first hand, and made sure the danger came into his music. The apprentice's death was an accident waiting to happen.
at March 21, 2010