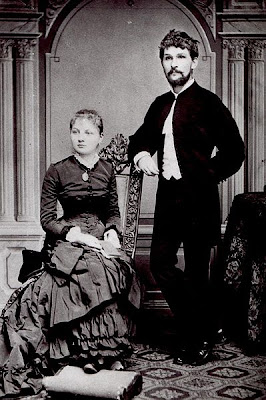 Is Janácek proto-feminist? Janáček depicts remarkable women from Makropoulos to Málinka, who moves from being a maid to Queen of the Moon in The Excursions of Mr Brouček. None of them meek bimbettes, not even when they're put upon like Katya and Jenůfa. At first, it seems as though he's celebrating feisty women - think of The Cunning Little Vixen who cannot be tamed. Or the gypsy girl who leads the nice boy astray in The Diary of One who Disappeared.

In his personal life, the composer treated women like dirt. He pursued Zdenka when she was only 14, but treated her abusively for the rest of her life. Ironically she was ludicrously loyal. We also know what happened because an observant maid wrote an inside account. Even the servants in Janáček's life weren't illiterate ciphers.

He loved his daughter Olga but sent her off to Russia when she was ill. When she came home to die, he praised her in music. And Zdenka's mother stood by him (and paid the bills), only to be rewarded with mother-in-law from hell portraits like Kabanicha, Mila's mother and (to a lesser extent) Kostelnička. Just as well Kamila Stösslová didn't fall for him, but callously exploited his weaknesses. She refused to sleep with him, because she was "chaste". So he blamed social pressure. "Poor Kamila! Can't let her end up like Katya!" 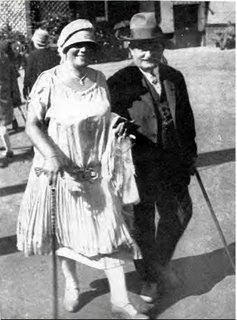 Janáček's women are vividly characterized. Yet it's not really because he likes them, but because they symbolize something he wants for himself. Even before he met Stösslová he was fantasizing about illicit relationships thwarted by other people. Živný in Osud even meets his wife in a spa (where Janáček later went with Kamila), and spends most of the opera in extended monologue about his own needs. The wife, Mila, spends much of the time dead.

Yet again, The Diary of One who Disappeared is the breakthrough. The gypsy girl is wild, a human Vixen, who lives in the woods and doesn't do houses, She's brown from the sun, She seduces the young man in the open air, among bushes. Eventually he turns his back on civilization, and joins her vagabond ways. Sexually she's extremely proactive, pulling up her skirt in case the lad doesn't get it.

Significantly, Stösslová was very dark, almost gypsy-like though she was hardly a sylph. She flirted but did not yield. For Janáček, the thrill of the chase, the allure of the illicit meant a lot more than the idea of relationships and responsibility. In his correspondence with Kamila (and it was largely an affair by mail) he says he wants kids with her, knowing full well the "children" will be his music. Breaking from convention, for Janáček, meant creative release.

Perhaps that's why he's so interested in wanton women who defy society. It makes them seem racy, wild and free. Quite possibly he wouldn't have coped with modern permissiveness where there's no guilt and fear. Kostelnička's religious, but not puritan. She kills Jenůfa's baby because she wants her stepdaughter to have another chance at life. She kills from misplaced love and accepts she must pay the price.

Kabanicha, on the other hand, is fanatical to the point of obsession. She's not repressed - the Dikoj scene proves. But she's a monomaniacal control freak. That's why she hides the key, insteads of just locking the gate. The scene is the key that unlocks deeper levels of meaning in the opera. Because she's so rich, Kabanicha knows she can manipulate things. So after Katya dies, she thanks people for showing her family respect. She gets away with it because no-one questions wealth. Janáček is saying, "Watch out!"

This puts From the House of the Dead into perspective. No women here to provide cover for other ideas. In Dostoyevsky, Janáček has found an outlet for his subversive radicalism.

A few years ago, I heard Jan Smaczny describe Janáček 's brushes with music critics and politicians. One of the men he lampooned eventually became Minister of Culture. No big government grants and publicity for Janáček, then, especially under Communism when his irreverence would not have gone down well. Janáček was Russophile because he didn't like The Austrian Empire (and Zdenka's family were German speaking upper middle class). Had he lived to see Soviet tanks, in 1948 and 1968, his Czech loyalties would have won out. No way was the Communist regime going to risk promoting him too much.

This approach also has implications for performance practice. Janáček spent a lot of time listening to folk melodies, but deliberately didn't write "folk music". In his maturity, he was discovering new means of expression, relevant to the age he was living in, The Czech and Moravian nations were not backward. Think Kafka, or The Good Soldier Švejk, both contemporary. Janáček was no faux naive bucolic. His nationalism wasn't picturesque, but progressive. So it's probably not a good idea to think of Janáček as tourists might, but to approach him as a Czech (Moravian) modernist.

Lots more on Janáček on this site, and come back Saturday, after the Cunning Little Vixen. Tomorrow I'll upload videos of an early Vixen movie !
at March 17, 2010