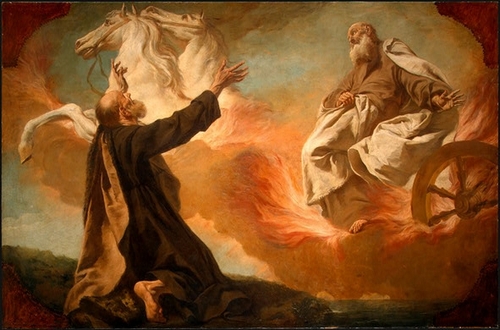 Droughts, deserts, false gods, angels, earthquakes, hurricanes, tsunamis and a firestorm. Plenty of drama in the Bible. Perhaps what drew Felix Mendelssohn to Elijah (Prom 58) was the personality of the prophet himself. But Elijah is a remarkable statement of faith. Christians may have monopolized the oratorio, especially in this country, but fundamentally Elijah reflects something even deeper in Mendelssohn's spirit. Although he was a devout Lutheran, never did he deny nor denigrate his Jewish roots.  Elijah's God isn't Jesus but the stern God of the Old Testament.  St Paul was written to please his father, but Elijah springs from deeper sources. This gives the oratorio an undercurrent of grit and draws from the composer some of his most passionate, powerful music. No wonder Berlioz and Wagner were jealous and did all they could to destroy Mendelssohn's reputation. The damage lasts still. One antidote is to listen to Elijah and think about what it means.

In Prom 58, Paul McCreesh conducted the Gabrieli Consort and Players. Wonderful choice, as McCreesh and his orchestra are formidably good early music pioneers. This Proms performance was informed by English Elijah performances (Birmingham 1846 and London 1847). The early music sensibility brings Elijah closer to Handel and Bach, who were Mendelssohn's own musical Gods, and who are quoted in the score. The leaner period sound may be why the oratorio initially appealed to the English dissenting movement rather than to High Church tastes. So McCreesh's decision to "reclaim" Elijah from very Late Victorian practice is significant, for it connects to a time when Non-conformism was part of British Christianity, and choral performance an expression of newly emergent middle class independence. Listen again to the broadcast, and contribute to the recording (not BBC). Because this Elijah goes back to the essence of Mendelssohn's beliefs, it's strikingly "modern" in the sense that it confronts dilemmas we still face today, like identity, faith and integrity. 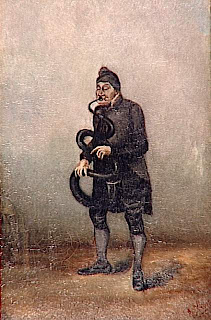 Orchestrally, this BBC Proms performance was wonderful. Instruments like serpents, orginally instruments used in warfare to scare the enemy - baroque fantasy put to practical use. Slide trumpets which still sound natural and relatively unpitched. Goatskin timpani. The Royal Albert Hall Organ restricted to period stops and pipes. Two ophicleides augment the brass, and a magnificent contrabass ophicleides, known as the "Monstre" for obvious reasons. This period sensibility is not merely historic affectation. In the Bible, Elijah is a wild man of the desert who stands up those who worship Baal, who seems to represent consumption and corruption. The orchestra connects to Elijah's spartan nonconformity, and thus has more authority than more elaborate instrumentation. Furthermore, McCreesh's musicians play as if they're evoking ancient Hebrew instruments. Mendelssohn probably wouldn't have heard Jewish liturgical music, but he had observant relatives, and was musician enough to intuit how instruments depicted in Bible pictures might have sounded. Mendelssohn is reaffirming his Jewish heritage discreetly but firmly. McCreesh and the Gabrieli's prove that period practice can be powerful..

The Gabriei Cionsort was augmented by the Wroclaw Philharmonic Chorus, wuith whom they've worked before. Exceptionally precise singing - not a word muffled, despite the size of the hall. Conducting this many singers at once is difficult, but here they were so well drilled, no-one fluffed an entry. Perfect co-ordination, but even better, total committment and enthusiasm. This was the best choral singing I've heard in ages and I've heard a lot. Perhaps it's because the music is so "singable". When the people call out to Baal, their calls are met by silence. These singers seem to listen! Blocks of male and female voices alternate and interweave."Thanks be to God! He laveth the thirsty Land!", the voices sing. Mendelssohn builds into the wild cross-currents images of wind and rain, thundering into parched ground.  There are so many exquisite passages, it's hard to pick out the most beautiful. "He, watching over Israel, slumbers not, nor sleeps" for example, where the words "slumbers not nor sleeps" repeat in lovely tender patterns. Such delicacy from such a huge chorus. And the glorious apotheosis of the final "and then shall your light  shine forth", ablaze with glory, for Elijah has ascended to Heaven in a fiery chariot.

Although the five soloists naturally take the foreground, it's the magnificent background of the choruses that make Elijah the monument it is. Three hundred voices, creating a wonderful opulent sheen. These are the "people of Israel" after all, for whom Elijah sacrifices himself, so it's utterly appropriate. Poised between soloists and massed choir are sub-groups like the double quartet, the quartet and an exceptionally good  trio. "Lift up thine eyes to the mountains", this group sings "whence cometh help". They're so clean and pure, they really do sound like angels.

Of these 300 voices, 181 are the voices of children from four youth choirs who participate in the Gabrieli's Youth Coaching Project. This is an important part of the Gabrieli mission. Even though young voices break, by being involved, they learn the physical joy of singing and appreciate music better whatever they might go on to do in  life. Singing is a community thing, and enhances life. Read more about the project HERE. These singers are so well trained that there's no lapse in standards. Indeed, their freshness and enthusiasm adds excitement to the performance. Someone asked me why a large Polish choir, the Wroclaw Philharmonic Choir was included. Simple answer - they are superb, and McCreesh and the Gabrieli Consort are performing Mendelssohn Elijah in Wroclaw, Poland on 18/9 and at Mendelssohn's own Leipzig Gewandhaus on 16/9. 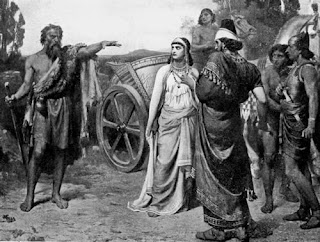 Simon Keenlyside sings Elijah. This is the key part, on which the whole oratorio hangs, and is the only one treated as a single "character". Keenlyside is good, though he's not quite as forceful as Terfel, Fischer-Dieskau or Goerne, but that's OK. We don't need Elijah as wild prophet of the desert every time. His recitatives, "It is enough, O Lord" and "O Lord, I have laboured in vain" could have been more heart rending, because they show Elijah as human and vulnerable, but Keenlyside keeps them "English" and understated, which is perhaps more apt in an English context.  Rosemary Joshua sings the soprano parts and Sarah Connolly the mezzo parts. Both very convincing, though I'm imprinted with Gwyneth Jones and Janet Baker. The Wroclaw Philharmonic Choir were part of that, too. Robert Murray had some tricky moments but better in the Obadiah pasages. Jonty Ward sang the Youth. It's a beautifully written sequence where Mendelssohn contrasts the anxiety of the crowd with the pure, ringing tones of the Youth rising from silence. "It is nothing", he sings three times. Then Elijah begs God for a sign, and the Youth beholds a cloud rising from the waters. It's the incoming hurricane, and from then on all hell breaks loose in the music, and the people cheer. (Joshua sang with McCreesh in the 2009 Proms Haydn Creation. Read about that HERE, because it was a pioneering project and very relevant to this 2011 Mendelssohn Proms Elijah)

Possibly this was the best Prom for me this season, it was that good. Listen again HERE and support the CD. More details on the Gabrieli Consort website, which is packed with information about the music, the players, and the instruments. A great resource.
Please note there's a lot on Mendelssohn on this site, also on Handel ! And Elgar. Please take tim e tpo search.
at August 30, 2011

Thanks for such a great review.
I was one of the young singers in this performance and it was really an amazing experience that I'm so grateful for, and I'm sure all the other young singers were too.

Incalescant, it is YOU that needs to be thanked, not me ! It was the young singers who really gave this performance zip and excitement. Without them it might just have been another (very good) performance, but the young singers were so enthusiastic and so spirited, the whole experience was uplifting ! Whatever you go on to do in life, I hope you never forget how wonderful you were, and how happy you made thousands of people ! Please tell your friends how much I appreciate what you did. You deserve3 all the praise you get !