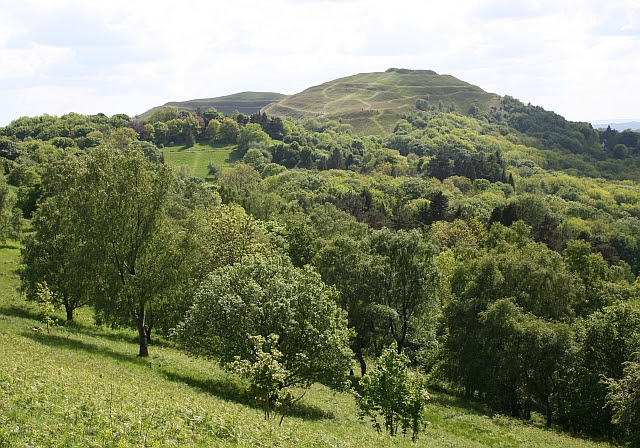 "Watchmen alert!" sing the massed choir. Right from the start, Elgar's Caractacus begins defiantly. "The Roman hordes have girdled in our British coast". Then Caractacus takes up the call. "Watchmen alert! The King is here!".The Romans have invaded Britain. Legend has it that the Britons' last stand took place at what is now known  as the Herefordshire Beacon, where the  remains of ancient fortifications can be seen atop a hill with panoramic views over the Malverns. (photo copyright Bob Embleton)

The Britons were facing a crisis situation, but in 1898 Elgar's Britain was at its peak. Basking in the certainties of their manifest destiny, Victorian Imperialists didn't register the irony that they were themselves doing to others what the Roman Imperialists did to their ancestors. In the last big chorus, Elgar's text specifically mentions "the flag of Britain (and) its triple crosses", ie the Union Flag which didn't exist until Stuart times, and British dominion "O'er peoples undiscover'd, inlands we cannot know". The truculence of this oratorio might inspire The English Defence League who clearly forget that if it hadn't been for Empire in the first place there wouldn't be immigration now. Indeed, Caractacus and his tribe were only one segment of a Britain populated from time immemorial by Celts, Picts, Angles, Saxons and other migrants to come. Hearing Caractacus, we can appreciate the pain Elgar experienced when the 1914-18 War destroyed the world he had known before.

At the Three Choirs Festival at Worcester Cathedral the audience is far too fundamentally decent to support the violence of the Far Right. This is what is great and good about the British spirit, and about Three Choirs, where it thrives so well. The locals were discussing the murder of three Muslim youths who were defending the whole community during the riots. We're all British together.

Elgar's Caractacus was very much inspired by the spirit of the landscape around him in the Malverns. The text may be violent, but the music is gloriously pastoral for the most part. The "Woodland Interlude" that begins Scene III is short, but its verdant loveliness pervades the entire work. The Druids worshipped the forces of nature. Dense woodlands were sacred to them just as Worcester Cathedral is to the modern faithful. For Elgar, nature and landscape were almost sacred too. He wrote to a friend (who appears encoded in the Enigma Variations), "the trees are singing my music- or have I sung theirs?" 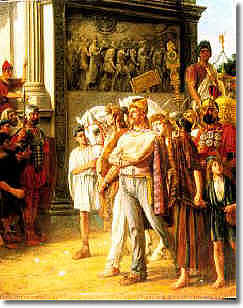 "The air is sweet, the sky is calm" sings Caractacus, "all nature round is breathing balm.....O spirits of the hill surround, with waving wings this holy ground". Peter Savidge's firm intonation carries authority naturally, without being forced. His diction is so clear that it cuts through the choirs, decisively. He creates Caractacus's character with warmth and sensitivity, more faithful, perhaps to the spirit of the Druids than to High Victorian arrogance. Just listening to Savidge, you can understand why Claudius, the Roman Emperor, was so impressed by Caractacus's moral strength that he treated the Britons with respect. Savidge's O my warriors! was expansive, yet surprisngly tender. Truly "a freeborn chieftain and a people free  ...(whose) soul remains unshackled still"."

Elgar's forte is the orchestral extension of text, so performance stands or falls on orchestra and conductor. Andrew Davis and the Philharmonia were superlative, technically brighter and sharper than the London Symphony Chorus were for Richard Hickox on their recording almost 20 years ago. Davis delineates the underlying themes so precisely that the music seems to come alive, whispering meaning much as the trees the Druids worshipped whispered meaning to them. Tight dynamics built drama into what might otherwise be fairly stolid Victorian melodrama. When this performance is broadcast on BBC Radio 3 in September, after the Proms. Make make sure to listen, because this is the new benchmark. Hopefully, a recording may be made available. Worcester, and the Three Choirs Festival are sacred ground to Elgar enthusiasts.

What makes the Three Choirs Festival unique, however, is the quality of the choral singing, which is the whole raison d'être behind this 300 year old tradition. Although at moments it wasn't easy to make out all the text, the fault lies not with the voices nor with the choirmaster but with the text itself. English is a language which lends itself to vowels rather than consonants, so it's easy to approximate vocally, which is why it's near universal today. There were many Caractacus figures in Gaul and in the lands of the Franks, so in theory there might be similar works in French or German, but they'd sound completely different. Caractacus and Nabucco share similar ideas, but Verdi and Elgar could not be more dissimilar. The relative imprecision of English makes the Triumphal March sympathetic. The Britons are a ragged bunch of wildmen, very different  to the sophisticated Roman Court, yet they win out since Caractacus is a level-headed fellow.

Brindley Sherratt sang Claudius with such rich resonance that he brought out the depth in the Roman's personality. The Romans may be the enemy, but Sherratt shows what a fundamentally civilized man Claudius is, for he can show mercy without compromising his power. Stephen Roberts Arch Druid/Bard was also deeply impressive.  Judith Howarth reprised Eigen, Caractacus's daughter. Her voice is in excellent form, still pure and sweet though it's been 20 years since she sang it with Richard Hickox. In  At eve to the greenwood she managed the sudden leap up the register with aplomb. Even better was her When the glow of the evening. Ben Johnson sang Orbin, the Druid whom Eigen is in love with. Johnson's very young and this is a fairly demanding part, so he did very well indeed. His bright tone is matched by good Italianate looks and an expressive face - perhaps someone to cast in operatic roles?

Listen out for the BBC Radio 3 broadcast of the Three Choirs Elgar Caractacus as it's superlative. In the meantime, below is a clip from a 1928 recording by Peter Dawson, which Elgar himself would have known. It's But Rome and all her Legions.  It epitomizes the good and the bad in the whole oratorio. The text is lumpen, but listen to the gloriously Elgarian grace in the orchestration. Think of the Dream of Gerontius and read my analysis of that here. More formal review of Caractacus Elgar here.

Ben Johnson is singing Nemorino in L'Elisir d'Amore at the start of the Eno season.

Compared with VW and Finzi for instance Elgar had a very poor instinct for choosing texts.