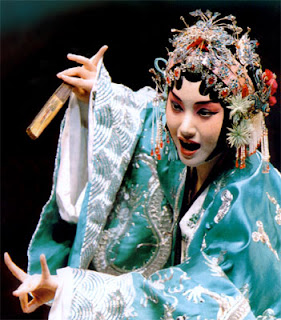 The Peony Pavilion (牡丹亭)(Mu Tan Ting) is one of the great Chinese classics, and at the Edinburgh Festival 2011, it appears in ballet form with the National Ballet of China. From the clips it looks fun. Tang Xianzu (湯顯祖) (1550-1616) was one of the greatest Chinese playwrights, and Peony Pavilion is only one of several of his sagas that have become famous Chinese operas. The Peony Pavilion is one of China's greatest classics, so knowing about it is absolutely key to understanding Chinese culture.

Every region in China has its own variant of Chinese opera, and within each region there are numerous different styles. Most people in the west have seen Beijing opera masks, but Beijing opera is almost more acrobatics than other forms. My thing is Cantonese opera, glorious for voice as the dialect has nine tones, unlike the main national language which has only four. These nine tones can be varied by varying tempo, alliteration etc, so to me it's exqusite. Generally though,  the finest Chinese opera comes from Suzhou, a city synonymous with elegance, refinement and erudition. "The best scholars, the most beautiful women, the loveliest gardens" (some over 1000 years old). And the finest Suzhou opera is kunqu (崑曲). 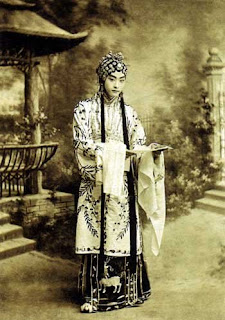 Kunqu developed in the Ming Dynasty (1368-1644), China's Golden Age in artistic terms and pre-dates all other forms of opera, both in China and in the west. It now has protected status underr UNESCO. But what's given kunqu a new life has been the work of Professor Pai Hsein-yung (白先勇). The original Peony Pavilion went on for days, the scholarly audience delighting in long literary and philosophic peregrination, which nowadays is lost on most people.

Professor Pai's edition concentrates on the essential drama in the plot A clever girl, Du Liniang, has a vivid dreams about meeting the perfect lover. She believes that destiny will guide her lover to her. She dies. Her parents pine and the family mansion becomes derelict. The man is a destitute scholar, so the gardener takes pity and lets him stay in the secret pavilion. He finds the secret portrait the girl hid in a rock in the deserted pavilion. Dead girl reappears as a ghost. Intense love. Girl gets resurrected! (For detailed synopsis and analysis please read HERE).

How "modern" and universal these themes are - Dreams, the subconscious, love, nature and the supernatural, battle scenes, humour, life after death and the idea that virtue is rewarded. One big sub-theme sends up scholars and pretenders, which must have had scholarly audiences creasing up with laughter.

Du Liniang herself is an amazingly adventurous character. She's rich and spoiled but wants to study like a man. Even her snappy maid runs rings round the old fellow sent to teach her, but it's not nasty, and rather touching. Lots of scholars never went on to fame and fortune. Proactive, creative Du outfoxes everyone - her parents, her tutor, the military, her lover and even death. In the video clip below she is painting her own portrait, the audacious hussy, and hides it in a rock by the pavilion so it will be found by her future lover just like in her dream.Even the minor characters are fun, like the pert maid and a wonderful Bandit Queen. 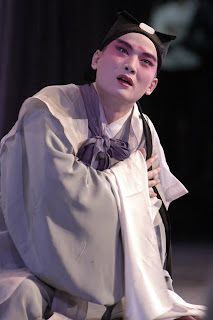 I took a friend to the 2008 Sadler's Wells performance who didn't know much about Chinese culture and he was overwhelmed. It was so colourful and expressive - emotion transcends language. The new version is still over 10 hours, but it flies by, because the story is so strong and the performance, by the Suzhou Kunqu Opera Company, was superb.There is a DVD available of the 1998 premiere. It's been reissued in "normal" DVD form, but I have the original, in a handpainted padded silk presentation box, and signed by Professor Pai.

Although Chinese opera is very stylized, it's this very stylization that gives it the strength to renew itself. Once you're used to the basic rhythms, gestures and cues, there's a lot of interpretive freedom, even room to improvise. Chinese opera fans, like opera fans in the west, cherish minute details (especially now we have film and CD). But even an ancient form like kunqu isn't a museum piece. Like Du Liniang, it gets resurrected and lives anew. (Please see lots of other posts on this site, which is one of the few which discusses Chinese opera, movies and music  in English). You can download a translation of Tang Xianzu's The Peony Pavilion from Project Gutenberg.

By those harmonics could we not think Melisande is a little Chinese?
No link to religion in Chinese opera?
Thank you for sharing.