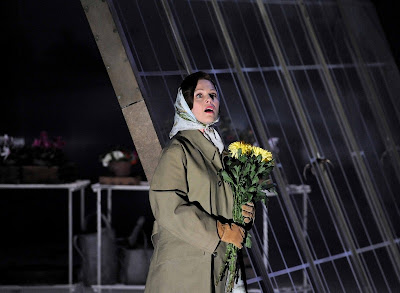 One hardly needs fake country house in a real country house like Glyndebourne. Jonathan Kent's production of Benjamin Britten's The Turn of the Screw, broadcast from Glyndebourne, teases out the sinister levels in this cryptic opera, where the drama lies in the psyches of the protagonists, not in the furnishings.

Note how quiet Britten's music is, accentuating the disquiet in the narrative. Jakub Hrůša turned 30 only this July, but he's the Chief Conductor of the Prague Philharmonia and has guested everwhere. He conducted an excellent Don Giovanni at Glyndebourne this summer, and conducts Glyndebourne Touring. He completely has the measure of Britten's quirky, discordant style. "Sharp, fixed, strange", as the Governess describes Peter Quint. And so Hrůša's precision brings out the danger in Britten's score. Tight drumbeats mark the beginning of the secret battle, as the children act out Tom, Tom, the Piper's son. Nursery rhymes with a sinister twist. The interludes are particularly expressive, evoking hard glass surfaces, dizzying heights and the ungiving, rock-like hardness at the core of the plot. No chintz here. Hrůša won't please everyone, but that's exactly why his conducting is so good. He's absolutely right  for the tightly coiled anxiety that makes this opera so powerful.  Definitely a conductor to keep track of.  I'm going to buy his CDs.  (photo: Petra Klačková)

Miah Persson is a fantastic Governess. Listen to where she sings Alone, tranquil, serene, her voice soaring ecstatically on the word "alone". Persson's voice is naturally luscious and sensual, hinting at the sexual repression at the root of the character. (Henry James, who wrote the original novel had a brother who was a psychologist when the discipline still equated hysteria with the womb). The Governess sees a shadow, identified only as "he", a detail so subtle it's often missed. Persson sings with such tenderness, you know she 's thinking of the uncle. Hence her distress when she doesn't know who "he" is.

I've rarely heard an In my Labyrinth which combines demure with demented as well as Persson sings it. She keeps the maniacally tight beat, yet with a wild edge, suggesting she'll snap. Her English is so perfect, that you might not know she's not a native speaker, but this only underlines the basic fact that the Governess isn't Establishment. She's most definitely not "among her kind" as the text keeps repeating. That's why she's in awe of the uncle, the house and all it stands for. She wears the uniform of 50's respectability but she hasn't the experience to deal with the madness or evil she finds. Miah Persson's portrayal makes you realize that the Governess is out of place even before she arrived. Effectively, she's trapped in an infernal machine. Kent shows her arriving in a railway carriage (the scenes outside not unlike those around Glyndebourne).

Class and status do matter in this opera. Mrs Grose, The Governess and even Peter Quint are pawns because real authority lies with the remote, sinister uncle. Mrs Grose (admirably played by Susan Bickley) shields behind bucolic subservience until she hears Flora's nightmares. But maybe she's still being manipulated. Miles dies, but what will Flora do in another place and time?  Flora acts up sweetly, but she's no more pure than Miles is. Many productions are fooled. Kent hints at the danger in Flora, by showing how she's very much Miles's partner in the kinky game where the pair ride each other flailing whips. Later, Flora shoves her doll up her jumper, in a truly horrific imitation of pregnancy. Joanna Songi sang the role in 2006 so vocally she's assured, but even better, she can now create a Flora who is sexually potent while playing at being a child. The connection between Songi's Flora, with her head in the sink, and Giselle Allen's Miss Jessel, who drowned, is clear.

Toby Spence's Peter Quint is excellent. It helps that he still looks like a cherub, though he's not as skeletal as Ian Bostridge, or vocally quite so intense. Oddly, he does resemble Thomas Parfitt, who sings Miles, and even more strangely, one of the musicians in the orchestra. The orange hair is in the libretto, hinting at Quint's demonic nature, so it reminds us that Quint's good looks aren't conventional. Spence is so convincing in the role that it's frightening when he hugs Parfitt at curtain call. Of course it's perfectly innocent, because Spence is kind hearted. Normally we'd beam. But after having experienced a performance as unnerving as this we recoil, despite common sense, which itself says something. We've lost our innocence too. 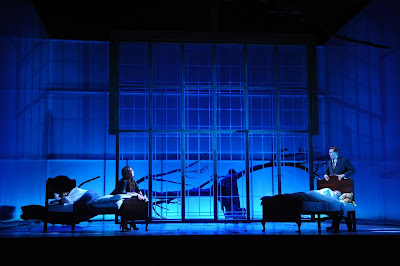 The set, too, is superlative. Kent and his designer, Paul Brown, take their cue from the music. Like the music, simplicity is all, clarity used in a way that confounds the impenetrable elusiveness of meaning. Throughout the libretto, images of windows, glass, vantage points and strange angles, like Quint in the tower. Glass can be both transparent and opaque. It's strong but when it shatters it's lethal. Study the scene where the Governess and Miss Jessel confront each other with a three panel mirror. Who reflects whom?

Paul Brown creates a set that, like the exploding box in Don Giovanni, moves quickly and doesn't impede dramatic action. It keeps twisting and changing, like the plot. Walls fall in and lean dangerously. A central panel looks like a giant window, blocking off interior from exterior, yet shifts as rapidly as perspective shifts in the opera. Only at the very end does the panel turn completely horizontal. Viewed sideways it's revealed as thin and fragile and seems to disappear. Kent and Brown describe it as a "membrane" between the Governess and "the others".

Even the sofas aren't comfortable. These ones travel of their own volition (propelled by an underfloor mechanism). Floor level objects spin in ellipses, panels above bend and twist shape, and mysterious, atmospheric lighting (Mark Henderson).  This is a staging that moves like Britten's music, every bit as elusive as meaning in this most unsettling of operas, where nothing is meant to be quite as it seems. This Turn of the Screw, from Glyndebourne is both classic and groundbreaking and needs to be experienced by anyone wanting to come to terms with ths striking originality of Britten's mind. Altogether, the 2011 production is cast so strongly it would be hard to beat, and Jakub Hrůša's conducting is exceptional. Extremely well directed for film, too, showing a wide rangle of angles - like the plot - and close-ups used for proper effect.