Hiroshima Nagasaki and the Burmese Harp 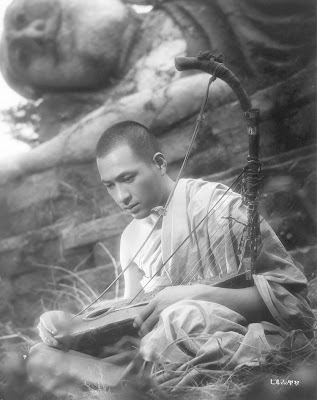 Sixty six years ago today, a bomb fell on Hiroshima, and another soon after on Nagasaki. The world changed then, whether some realize it or not. Even now, there are many who don't comprehend what this mass destruction meant, and what we might learn from it. Tsutomo Yamaguchi, who survived both bombs, dedicated his life to helping people understand. "I believe in love, in human beings,” he said. “The reason that I hate the atomic bomb is because of what it does to the dignity of human beings....... When you forget the dignity of individual human beings, that it is when you are heading towards the destruction of the Earth.” (For more please read HERE)

Yamaguchi would have understood The Burmese Harp (ビルマの竪琴 Biruma no tategoto) only too well. This film isn't about war so much as the way simple humanity can overcome horrific trauma. So perhaps it's something we should meditate upon.

A Japanese unit is in Burma. One young soldier, Private Mizushima (Shoji Yasui), has built himself a Burmese harp. He plays it so beautifully that his fellow soldiers are lifted out of their situation. Captain Inōye (Rentaro Mikuni) is young, but the kind of leader who cares deeply for his men. He's also a musician, who keeps up their morale by getting them to sing. The men hear of Hiroshima and the end of the war. Inōye sends Mizushima to tell a unit holed up in a mountain to surrender. The news is so shocking to them that they can't  take it in, but before they can reconsider, they're massacred. Mizushima survives, covered by bodies. His wounds are treated by a Buddhist monk and he dons a monk's robes. 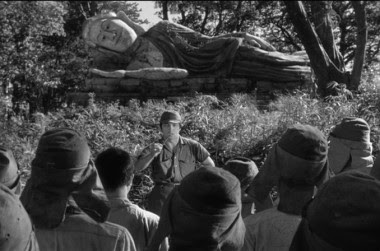 Everywhere he sees the bodies of the dead. Mizushima starts to bury them, but there are too many. He's haunted. He realizes he can't go back to normal life. Meanwhile, the war has ended and the unit is in a POW camp. The soldiers are desperate to know if Mizushima is OK. Captain Inōye has trained a parrot to say "Mizushima, come back to Japan" because the men think Mizushima has deserted.

In his wanderings as a monk, in the Burmese villages, Mizushima  taught a Burmese village boy to play the harp. When the soldiers hear the boy play, they know Mizushima has survived. One day, they're crossing a bridge and pass a monk who turns away. Inōye realizes too late it's Mizushima. A Burmese monk delivers a box with the ashes of the dead.  Who sent it ? Eventually it's time for repatriation. The men release the talking parrot. They sense Mizushima is around. He's hiding inside a giant Burmese Buddha. On board the ship home, Captain Inōye reads the men a letter Mizushima has sent. He's decided to be a monk and wander, penniless, over rivers and mountains, in expiation of something he can't express. Being a monk helps, but sometimes the heartbreak is so great he has to break his vows and play his harp to cope.

"Why must this world have such misery ?" he writes,  "Why must there be such inexplicable pain? ....the answers are not for us humans to know. Our work is simply to have the courage to face suffering and irrationality without fear, to have the strength to create peace by one's own example. "

Simple is often the hardest thing to do. This film (directed by Kon Ichikawa, 1956) means a lot to me. Once in the archives I found a transcript of a testimony by Colonel Doi. He had served in China since 1937 and fought in Malaya, the Philippines, Indonesia, Guadalcanal and Okinawa. Could a man survive all that unscathed, even if he was an officer, not frontline fodder? After the war he became a monk in Japan, praying for the souls of thousands who didn't survive, and for those his actions had killed.  When my father went to Japan he saw a disabled veteran begging outside a temple and instinctively bowed. Why, when his brother and friends were killed in a war crime , possibly connected to Col. Doi's men, though not at his command ?"I don't know" said my Dad, "but the soldier suffered too".

For my piece on Ikuma Dan's Symphony no 6 "Hiroshima" please read HERE.

Please explore this site, lots of posts on Hiroshima and Nagasaki, Chinese and Japanese culture, films, music and history the Holocaust, anti-war, non-violence and Aung San Suu Kyi. (use labels and search box). Here is a link to Kuroi Ame (Black rain) the film about Hiroshima with music based on Toru Takemitsu and here is a link to Kobayashi's The Human Condition.
at August 06, 2011