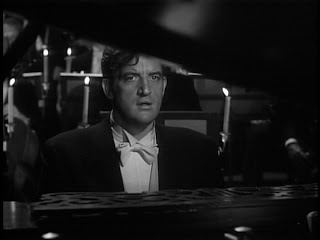 "This is the story of George Henry Bone....the British Catalogue of Music lists him as a distinguished composer". What "British Catalogue of Music"? Lots more in this film that's slightly off centre. The director is John Brahm, not quite Johannes Brahms, the writer is Barré Lyndon, not Barry, and Bone lives in an ultra swanky Edwardian mansion in Hangover Square named for no obvious reason except that drunks clear their heads when they walk round.  The real life star of Hangover Square was Laird Cregar, who died tragically aged 31 before the film was released.  On the other hand, that's exactly the premise of the story : what you think you see is not what you get.

Bone comes in from a night out to find distinguished Sir Henry, conductor of the Philharmonic, in his house, who asks him to write a concerto. Like it's so easy? So George wanders into a lowlife music hall where Netta sings. Netta's not quite the usual pub act, she can play George's melody from memory and sees its potential as a waltz.  So she and her manager latch onto George and he writes hit tunes for them instead of completing his concerto.  George becomes hopelessly infatuated with Netta who uses him cruelly. What she doesn't know is that George has extreme mood swings that are triggered off by music. A problem for a musician. When he's stressed, George goes into homicidal rages and kills people.

On Guy Fawkes Night 1903, George snaps and kills Netta, and disposes of her on a gigantic bonfire. Nearly everyone's wearing a mask, including Netta. Why doesn't George? Since no-one does Bonfire Nights this elaborate any more, we can rest assured we couldn't get away with it. The police discuss "thugee knots" and decide George must be the killer after all, and rush into the Philharmonic Hall where George is playing his now complete concerto. (note the semi-circular seating plan) . In the scuffle, a fire breaks out and everyone runs for their lives, but George plays on.

George's concerto is  Bernard Herrmann's Concerto Macabre (1945), gorgeously over the top, like demented Rachmaninov. Madly schizophrenic, atmospherically perfect. Herrmann is the man who wrote the stabbing music for Psycho, Twilight Zone, Taxi Driver and much else.. Listen to Concerto Macabre as a concert piece, freed of the melodrama, and it's great fun. Writing for Hollywood was hack work, but the best composers still managed to produce interesting material. Indeed, I'd venture that the movies wouldn't have been so successful without some of these soundtracks. Another curious but true fact. Bernard Herrmann adored Gerald Finzi, long before Finzi was really famous. Herrmann used to visit England to see Finzi and stayed with him at Ashmansworth. What an unlikely pair! The hard-bitten Hollywood mogul and the quintessential other-worldly Englishman. But again, appearances deceive. Finzi was the ideal Englishmen straight out of central casting, but was, to his credit, a self-made man, as was Herrmann in his field.

Email ThisBlogThis!Share to TwitterShare to FacebookShare to Pinterest
Labels: Finzi, music for film