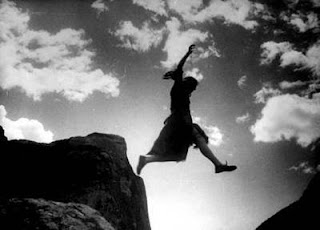 Feral girl leaps off mountains? Not Catalani's La Wally but Junta, wild child of Santa Maria, in Leni Riefenstahl's 1932 movie Das blaue Licht. Some 1930's pilots land in a village in the Italian Alps. It's so remote that there haven't been visitors for 200 years. Real peasants in the film, I think, since their teeth are twisted, missing and black! The children gather round and show the strangers huge chunks of glittering gemstones, and a painting of Junta.

Junta lived in a hut in the high mountains, sleeping on straw, foraging for food, her only friend a young shepherd boy who tends his flock in the alpine meadows. Junta and the boy "converse" with animals, as if they have clairvoyant skills (watch for the shots of attentive goats and dogs). Think of Grieg's Haugtussa, where the shepherd girl has second sight and communes with nature spirits, whom no-one else can see. Many mountain communities have similar legends.

The villagers live tough, repressed lives that centre round church and work, while Junta prances about in a torn minidress and flaunts her bare legs. Some nights when there's a full moon, the locals can see a strange blue light, glinting hiugh up in the mountain peaks. Young men in the village are driven mad and haver to be locked up, or they head off into the mountains and fall to their deaths. The villagers think Junta must be a witch, and drive her away when she comes near.  One day a posthorn call announces the arrival of a painter. A High Romantic, who wears trousers with a flap in front and wants to paint mountains. Like an animal, Junta's instincts are to be wary but gradually she trusts him enough to let him stay in her hut.

One night, when she slips away into the darkness, he follows without her knowing. Higher and higher she climbs, past a waterfall that comes straight down at 90 degrees from a great height. Then she disappears into a crack among the stones. The painter looks in. It's a cave, covered with blue crystals  that emit a wondrous, unearthly glow.Junta sits transfixed, as if she's communing with some unearthly spirit. It's the source of the blue light that drives village lads insane. Having learned Junta's secret, the painter tells the villagers and they head off to the cave while Junta sleeps.

She wakes and climbs back up a 400 metre rockface, absolutely vertical. Apparently, these films were shot without stuntmen, though the angles might have been exaggerated. But there's Riefenstahl climbing up the cliff in a dress, ballerina pumps and bare hands. No ropes, no crampons. In those days even fulltime mountain men dressed in "normal" clothes. The cameramen must have been like goats, too, for some of these shots are breathtaking and taken at dizzying angles. Riefenstahl jumps from pinnacle to pinnacle (as in photo above) clambers up mountain "chimneys" one foot on each side. This whole genre of Bergfilme, pioneered by Dr Arnold Frank, are reverently studied by climbers today. 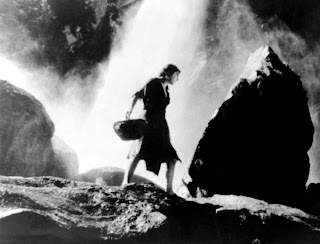 When Junta gets to her cave, she finds it stripped bare. The villagers have denuded it. Bereft, Junta wanders away in distress and falls to her death. The film is allegory, exquisitely filmed at a stately pace, so you don't rush. Climbers don't rush, they savour every move or they slip. There's hardly any dialogue, since Junta doesn't speak much. In any case the villagers speak an Italian dialect, and the painter speaks German. No real communication, another sub theme in the film.

Reiefenstahl was just 30 when she made Das blaue Licht, which she directed as well as acted in (and did the stunts). Interestingly, the script was written jointly by Riefenstahl and Béla Balázs, a German Jewish writer who lived in Hungary. He was a socialist who went to the Soviet Union after 1933. He wrote a script for Die Dreigroschenoper which Brecht commandeered, and also the libretto for Bartók 's Bluebeard's Castle. Obviously his name was removed by the Nazi censors, and also the names of other Jews involved, but it does shed light on Weimar avant garde artistic circles. Riefenstahl was compromised, but remained adamant to her death, aged 101, that what she did was art.