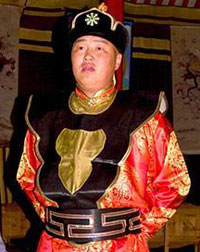 Mongols, Tuvans, Siberians, Russians and Chinese are at each other's throats over who should register throat singing as part  of UNESCO's register of "the intangible world heritage of humanity".  Western opera fans talk about chest and head voices but throat singing is the ultimate physical use of voice. It's done by using lots of different muscles to shape sound as it moves from lungs through mouth. Once heard, never forgotten.  As you can read from this Mongolian site, there are lots of different variants, just as there are many styles even within genres of western singing.

The Mongol nation once ruled the world. Think Kublai Khan and Attila the Hun, the latter a symbol of many nomadic nations that inhabited central Asia, marauding on each other. That's why the Great Wall of China was built, to keep them out. It didn't work. What a wonderfully rich heritage for a nomadic lifestyle. The Mongols, in a sense, were early "world citizens". So the scrap over who gets UNESCO to register throat singing is a bit of a conundrum.

Western concepts of nationality and fixed borderlines are irrelevant. Cultural identity transcends the sort of boundaries bureaucrats relate to. UNESCO heritage status is important because it is an obligation on governments to put resources into protecting and preserving. Suzhou kunqu opera, which got UNESCO heritage status a few years ago has thrived under this committment. So the problem is that governments and nations aren't the same thing. The idea of nation-state is a fundamentally western concept, and doesn't necessarily apply. Not even in the west. But it shapes the way we percieve things. Western cultural imperialism is so pervasive that we don't even notice.

The  Mongol nation exists in several different jurisdictions. Inner Mongolia, for example, and China have been linked for centuries. The Mongols conquered China, founding the Yuan Dynasty (1271-1368). Instead of bringing Mongol culture to China, the Yuan became fervently Chinese. Similarly, the Manchu, another nomadic nation, conquered China in 1644. Although the Yuan and Qing Dynasties ended, they are still part of one vast heritage. Where does one culture begin and end? Since such issues can never really be resolved there will always be tensions and rightly so. Strictly speaking, no-one owns a culture, because cultures are too diverse to define. Nomadic, one might say, constantly adapting and shifting locale.
The way technology is changing the world, we're all becoming nomads now, our heritage shared through many threads.

So glad you posted this. It's so easy to forget that our way isn't the only way of expression. The art of singing varies greatly across the globe from India to Arabia to Mongolia etc. The true artist is the one who learns to appreciate them all.
Thanks for posting.