Frank Bridge at the Proms 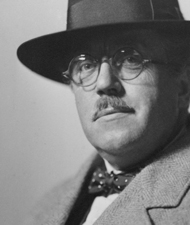 Frank Bridge may be this year's BBC Proms hero, "Backstage no longer" as Roger Wright Proms Director says in a very good article in the Guardian.  His music features in five different Proms this year. You can still hear rebroadcasts of Prom 19 where Oliver Knussen conducts There is a Willow Grows Aslant a Brook. Highly recommended (see review)  because it sets Bridge among European contemporaries. Beautiful performance!

Bridge never has been really forgotten, though he's often best known through the Benjamin Britten connection. This doesn't diminish him at all, because what Bridge taught Britten was to have wide horizons. Bridge himself had been taught by Charles Villiers Stanford, so he knew all about teachers who strangled young composers from birth. True creatives, like Vaughan Williams, found their voice when they got out from under Stanford's shadow. Not everyone though is an RVW. Bridge found his independence by turning to Europe and America. As did Benjamin Britten who never was clubbable or part of the insular "British music" scene. So it's significant that Britten, for whom English music meant Tudor and Stuart composers, should make a point of writing Variations on a theme of Frank Bridge.

In his article Wright discreetly touches on the extremism that exists in some parts of the British Music world.  Sometimes you wonder whether the cachet of obscurity is greater than the actual music. A lot of really nice people champion Havergal Brian, for example, good friends whose views I inordinately respect. But god knows, I tried, as did many others who have the Naxos Gothic Symphony buried in a cupboard somewhere. Similarly John Foulds whose Requiem bombed painfully when it  was finally heard again. (Though it may have been the sloppy conducting.) Maybe it's part of the Great British Eccentric Tradition in which ordinary people seem to do extraordinary things. It's a mindset that made the Joyce Hatto scam so plausible for so long. The full extent of that scam really needs to be investigated because it shows how the internet plants can infiltrate public opinion.  Hatto may be gone but the issues haven't, and may resurface in other forms. Generally, though, the mindset is benign and loveable in a dotty sort of way.
at August 05, 2011

"Sometimes you wonder whether the cachet of obscurity is greater than the actual music..."

Quite. However, it's also true that the British music world makes neglected composers of too many of its composers. Thinking about the Brian Gothic got me thinking of all the other 20th century British (or adopted British) symphonists that might have been "revived" at the Proms. Frankel, Panufnik, Alwyn, Searle, Lloyd, Joubert, Rawsthorne, Gerhard. There must be more. I've been having a listen to some of these this morning: there's a whole world of good music out there that hardly ever gets played. It's a great shame for them (and probably for Brian too) that Brian has become Britain's "celebrity neglected composer".