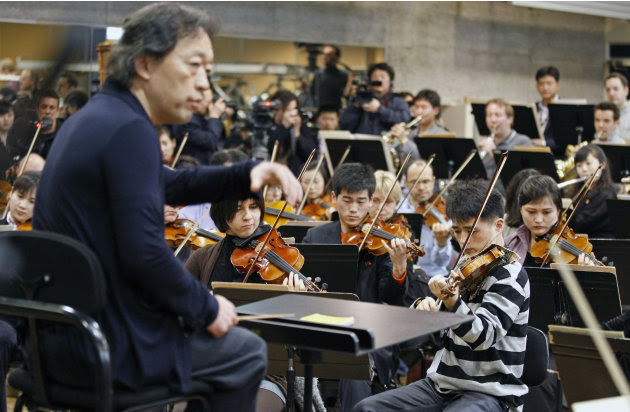 Here is the most detailed report I can find I can find on the extermination of the Unhasu Orchestra in Pyongyang, North Korea.  At least a dozen musicians, including the Orchestra's Leader, Mun Kyong-jin, and others were machine-gunned in a public execution on 20th August. News is only just emerging.

The Unhasu Orchestra is not the oldest or largest western orchestra in North Korea but it's extremely prominent.  Orchestras all over the world are used in big public galas, and the Unhasu was a "real" orchestra of serious musicians, although it was pulled out for state occasions and played for dictators.  Last March,  Myun-whun Chung conducted the Unhasu Orchestra and the Radio France Philharmonic at the Salle Pleyel, Paris (which is why I picked a French source - read the comments too).

Myun-Whun Chung went to Pyongyang to conduct them before they arrived in France. Since North Korea is very much a closed country with a paranoid regime, Chung's visit was something of a miracle. Classical music, to Koreans, is as important to their culture as Verdi is to Italians, or football to the British, so Myun-Whun Chung's gesture was sending out massive signals. He is a couratgeous man, because he knew thye risks. If Pyongyang had detained him, France might have reacted, though I guess the Anglophone world might not understood why musicians are such a big deal. The photo shows Chung rehearsing the orchestra. Now it feels tragic. I'm slightly worried that the story hasn't been corroborated elsewhere but nothing would surprise me. [Addendum : the lack of corroboration is troubling, but in situations like this news doesn't come out thru "usual channels". Just as news of Auschwitz, the famines of China in the 50's and Stalin's gulags filtered out slowly, things like this don't get covered in the normal way. People aren't going to twitter from Pyongyang! If the regime wants to discredit the story, they just have to produce the victims alive and well. Who has most to gain from the story ? Not Seoul or Beijing, who'd exploit it more if they could. But within the power structure of North Korea, it's an effective way of suppressing dissent. Kim Jong-un is still new in the job, and probably needs to consolidate his personal control.]

Obviously we don't know why the Unhasu Orchestra was targetted: paranoid regimes don't act logically. The musicians could have simply disappeared into gulags in the frozen north and starved to death like so much of the population. So a mass public execution means something. Maybe their prominence attracted rivalry, maybe it was simply because one of the women killed, singer Hyon Song-woi, was dictator Kim Jong-un's former girlfriend, though "girlfriend" in those circumstances does not mean voluntary as it might mean elsewhere. He married another singer recently. What hidden agendas might there be? Even though nearly everyone does music in South Korea, music circles are close enough that most people know each other even if just by name. In North Korea, because of the nature of the regime, circles are even smaller and tighter. I hate to think what might be going on.  In the west, we have things easy.

Below three contrasting clips. The first comes from the official DR Korea channel and shows Kim Jong-un cheering the Unhasa on a recent State occasion.Then the New Year Gala 2012. This is REALLY worth watching because it shows what state orchestrated music can be like. The concert is played to a backdrop of political videos, Massive choir. Where have we seen such things before ?  Spot the orchestra's leader, now murdered. Then the Paris concert with RFP two moths later.

Addendum : When the Wen Weibo ran a story on Kim's unclke being killed by dogs. the western media fell over themselves to ridicule the story. One writer sneered why X number of dogs when Y would do just as well ? That's not the point. The fact is that one of the most powerful figures in the country has been brutally disappeared.. That kind of writer possibly still denies the Holocaust.  Whatever is happening in Pyongyang is big, and should not be trivialized.

Some things still have the power to shock - especially this as I'd come across nothing about it elsewhere in the media. I suppose I could google, but do you know where any further details might be found?

The lack of cover frustrates me too, But it's not surprising as these things often come out in drips. Kim is consolidating his position,and dictators often choose spectacular acts like this to scare any opposition. He's just executed a very senior general, who was loyal to his father.

Today we have heard that other members of the Unhasu have been executed. Members of an orchestra which has not played since 2013. But...let's not go over the top. Hyon Song-woi, the singer executed in 2013 appeared in May 2014 in military gear and gave a 90-minute conference ! Of the 9 top officers executed in 2012...most have been seen alive. As for a public execution of one of the best known conductors in North Korea...that is not the way things are done there. Even Kim Jong Un is not that stupid. One of the best North Korean sopranos, Seo Un-Hyang was also executed in 2013...publically. She managed to sing on December 18th 2014. There are purges in North Korea as in all dictatorships. But most purges in NK add up to being exiled far away from Pyongyang. Most of these scoops come from the Chosun Ilbo newspaper which gets a lot of its info from the South Korean secret services. The latter often feed disinformation at delicate moments. These last few months have seen a rapprochment of NK with China and Russia. This worries South Korea. So as in every such moment the papers are fed with terrifying scoops. I am most certainly not a fan of the NK régime (after all, I'm Swiss....) but we should be wary of sensational news deriving from SK :-)

I wrote this article several years ago, before th3e story fully broke in the west. The Orchestra was the "state" orchestra used all the3 time on state occasions, incl Party events, it['s notreally a concert orchestra like in the west. The year after the story, it was dropped from formal celebrations. There have been reports that some of the3 singers have re surfaced, but nothing for sure. Obviously we have to be wary of South Korean propaganda, but that does not mean apologizing for the regime. There were many who refused to believe Hitler or Stalin were doing bad things. Whether or not the full story is clear, it's pretty evident there are purges and problems in Pyongyang.