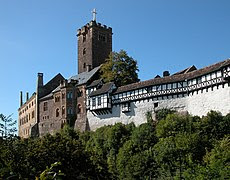 Wagner Tannhäuser Prom 29, hot on the heels of an excellent  Tannhäuser, at Bayreuth. Bayreuth wins hands down, no contest.

The Prom was OK for what it was and fans of conductor Donald Runnicles will be pleased, but orchestrally, Bayreuth was a revelation. Axel Kober was exceptionally good, and his singers (Torsten Kerl, Camilla Nylund) are top league. Bayreuth is the one to spend time with. I've listened to it 4 times now and still find wonders. I'll write more later. But first, some thoughts on the opera.

Wartburger Schloss is a fortress  See how it stands, dangerously perched over a steep cliff. It's a military base. In the 16th century, Martin Luther hid out here, after defying Church and temporal rulers. It became a symbol of resistance to "foreign" ideas. By setting Tannhäuser in Wartburg, Wagner connects his ideas to the rockface of rebellion. Significantly, Tannhäuser is rejected by the Pope, but he isn't destroyed.

In Tannhäuser the battleground revolves around  singers and singing. Wolfram supports esoteric art, uncontaminated by worldly needs. Hence his affiliation to the Evening Star, pallid and remote. Tannhäuser, however, has tasted lust, decadence and extreme emotions and wants something more. So he's an affront to  courtly Minnesänger values. Yet, compare Tannhäuser to Die Meistersinger von Nürnberg. Walther von Stolzing is an aristocrat, but an outsider, who challenges mindless conservatism. Elisabeth is a kind of female Hans Sachs. 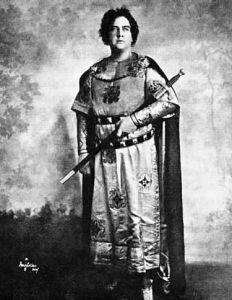 Zwietracht und Streit sei abgetan commands Landgrave Hermann, (no more contrariness and strife). Tannhäuser is welcome as long as he conforms. They want him because Elisabeth won't come to their revels otherwise. It's not him they care about really. But he's seen Venusberg, and alternatives to Wartburg the others can't even guess at. So they leap on him, prepared to kill, until Elisabeth intervenes. (The photo is Lauritz Melchior)

Who is Tannhäuser? He's arrogant, crabby and treats his good fortune with contempt. And yet Elisabeth adores him. Wagner treated many others in much the same way. So what's the pilgrimage? The Landgrave exiles Tannhäuser, forcing him to go to Rome to be absolved.  The pilgrimage music is so dominant that it's much more than a plot device, but fundamental to the whole idea of the opera: The pilgrims are a mass movement, old and young, submerging their individuality in heartfelt abasement. Significantly, Tannhäuser isn't one of the crowd. Maybe Elisabeth knows, for she heads off heavenwards. Nicht such ich dich, noch deiner Sippschaft Einen. (I don't want you and your type), he tells Wolfram, whom we in the audience have just heard singing the transcendent Song of the Evening Star. Tannhäuser deliberately rejects rarified, otherworldly sublimation. Old forms are hollow for him now. What he's become is a "modern" man with conflicts and angst. 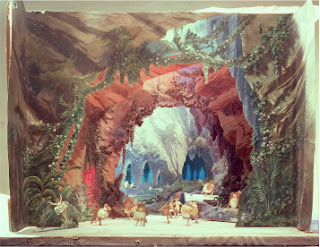 This is the set Wagner designed for Venusberg. Cliffs of stone outside, corals next, but as the eye penetrates deeper, softness, lushness. With Freudian hindsight one might think of reproductive organs. How that would upset conservative opera audiences!  So much for the idea of being true to a composer's stage directions.  Wagner's description of the scene is chaste but he and everyone else knew what Satyrs and Nymphs get up to. Tannhäuser isn't about the art of theatre so much as about, to put it bluntly, sex, and its creative power.
Tannhäuser knows Venusberg is dangerous but he has to go back.

Listen carefully to Tannhäuser's big aria Inbrust im Herzen which often gets overlooked because we're so stunned by the Abendsterrn. No-one was more penitent than he, says Tannhäuser, because he values Elisabeth's virtues. Therefore, Wie neben mir der schwerstbedrückte Pilger die Strasse wallt', erschien mir allzuleicht:.Tannhäuser debased himself more than the other pilgrims, choosing the most painful route, such was the intensity of his repentance. But the Pope (ie, God's representative) refused him pardon. Shattered, Tannhäuser's going back to Venus. To Wolfram, that's just nuts, he can't  understand at all. Tannhäuser's on an emotional plane which a relatively conventional man, even a poet like Wolfram, cannot begin to comprehend.. As Tannhäuser has been telling the Knights all along, they don't know know what intensity is, since they haven't experienced the extremes of Venusberg.

What they all didn't count on was Elisabeth's own ferocious intensity. She's so extreme that she can force God into action. She is definitely Tannhäuser's soulmate. Wolfram doesn't even come close, and it's a misreading of the opera to assume otherwise. Tannhäuser and Elisabeth are Tristan und Isolde.

From pilgrim procession to funeral procession. The pilgrims bear the Pope's staff, now sprouting fresh new growth. However the Pope's staff may be staged, the concept is crucially important to the meaning of the opera. Arrogant and rebellious to the end, Tannhäuser is saved, not by himself but by Elisabeth and what she believes in. The miracle may seem outrageous, but that's the whole idea.  As the pilgrims would say, Hoch über aller Welt ist Gott, und sein Erbarmen ist kein Spott! (God is greater than anything on earth. Don't make fun of his mercy.)

Email ThisBlogThis!Share to TwitterShare to FacebookShare to Pinterest
Labels: WagnerTannhäuser