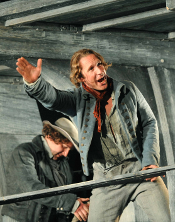 Britten's Billy Budd is being revived at Glyndebourne. Eveyone loves this production, directed by Michael Grandage, because it's so straightforward. Assuming, of course, that Billy Budd is a straightforward sea shanty about life on the ocean wave. Perhaps productions like these are popular because they castrate the opera and minimize its more disturbing meanings. Like Tim Albery's 1988 production with Thomas Allen, Grandage's Billy Budd could have been made for pre-watershed TV costume drama, where brutality, sodomy and moral contradictions have no place.  It's very dark and claustrophobic, which is true to the opera, but the emphasis is on Billy, not on Captain Vere, whose dilemmas should really be central.

Glyndebourne's Billy Budd will be immortal, however, for Jacques Imbrailo. He is so exceptionally perfect in the role that he outshines everything else. His portrayal is so charismatic that he shifts the whole balance of the opera from Vere to Billy. Imbrailo glows, as if lit by inner light. He's like a beacon in that fetid, prison-like underworld below decks.  Sometimes the role has been played as if it's a cipher, for no-one really knows where Billy is "coming from". Captain Vere has spent decades trying to figure him out, without success. Imbrailo, however, inhabits the part so fully that he turns the opera on its head. Imbrailo's Billy exudes genuine goodness and purity, borne of deeeply intuitive conviction. “Through the port comes moonshine astray” isn’t the usual lyrical magic but a kind of spiritual apotheosis. “I’m strong, and I know it, and I’ll stay strong!” Imbrailo’s “Beauty” isn’t a passive “Baby” but an assertive force of life.

Imbrailo's Billy is also deeply sympathetic. Imbrailo understands the psychological importance of Billy's stutter. Vere is intellectual. Billy, on the other hand, is instinctive, physical, direct. Imbrailo lives the part in his body. No makeup can turn his face red so quickly, no costume can create the tense, twisted coil of his frame. Imbrailo’s Billy is musically astute, as stammer is integral to Britten’s music. The mutiny, in Billy Budd, is in the music. So echoes of Billy’s stammer burst out in recurrent staccato in the orchestra, disruptive protests against the rigidity of naval life. The sailors don’t mutiny, but Billy’s stammer comes to affect the rhythms in other voices, even Claggart’s. Like Billy, Britten expresses himself in abstract sound, rather than relying on words alone. Orchestration as protagonist. In Billy Budd, Britten shows why he didn’t need to write symphonies.

Claire Seymour, author of The Operas of Benjamin Britten, will be reviewing it in Opera Today.  I was at the premiere in 2010, which is also available on DVD and will be broadcast this year in cinemas and online.