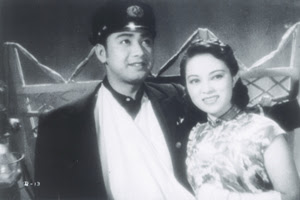 With trepidation, I watched China Nights, Shina no Yoru, the notorious film made during the Japanese occupation of China. For Chinese people, the film has negative connotations because it connects to a brutal period in the Chinese past. For a hundred years, the nation suffered humiliation and then was invaded yet again. Although this was a propganda movie, thousands of people watched it, and the song on which the film is based is ubiquitous. Why, I thought, did people watch it then, when the very mention of it now raises old wounds?

One steamy night in Shanghai, there's a fight. A handsome Japanese (Kazuo Hasegawa) rescues a Chinese woman (Li Xianglan). She says she has nowhere to go so he takes her back to his rooms in a building where many Japanese live. .He makes her take a bath. This is more provocative than it might seem to westerners because the Japanese were fastidious about cleanliness and regarded the Chinese as less so.  The implication is that the Japanese are in China to civilize the Chinese. But he's such a gentleman that he's chaste and respectful.

It's interesting to see how the other Japanese react. The house is "westernized" with typical thirties comforts. Nothing big deal in itself, as many Chinese lived like that too. The Japanese take their meals together on western tables and discuss the "scandal".  But the women are welcoming, even the one who is in love with Hasegawa. Even more significant are the scenes depicting the streets of Shanghai during the 1920's, when the film is set (though it was made in 1940). We see images of western soldiers marching on Chinese streets, western jazz and broadcasts, nightclubs for the rich while the locals struggle in poverty. This is not a film about gender politics as some have suggested. It's plain old-fashioned politics. Shanghai was occupied, too, not just by the Japanese but by western colonial powers who had themselves invaded China to force the country to trade with them. Let's never forget that China was "opened" so British merchants could sell opium. War is not, as has been said, the continuation of politics but the continuation of dirty business interests.
So Hasegawa and Li go shopping in a city where western troops march in the streets and the locals struggle in poverty. Propaganda, perhaps, but the Greater East Asian Co-Prosperity Sphere was a genuine belief in "Asia for Asians", though it was still colonialism, with the Japanese in control instead of Europeans. It's important to remember the relationship between Japan and China : Japan modernized with amazing speed and success. Chinese liberals, including Dr Sun Yat Sen, went to Japan to learn. It's not at all as simple as Chinese hating the Japanese the way westerners demonized the Japanese.  In this film, Miss Li is a metaphor for China, because she's an orphan whose home was destroyed in some unknown battle. She revisits the site of her former mansion, and picks a spray of plum blossom in the ruins. She weeps for her parents, and  Hasegawa comes and comforts her. When she was sick with fever, he nursed her back to health. They fall in love and holiday, blissfully, in the West Lakes.Wonderful shots of Old China, bridges, old boats.

Miss Li is, however, a partisan whose mission is to infiltrate Japanese circles and collect information.  Hasegawa confronts the Chinese underground and thinks he's saved Miss Li. They marry. She wears a modern wedding dress, but suddenly, he's called back to work. He's some kind of merchant navy security rather than military, which skirts the issue everyone watching the film would have known only too well. The cargo boat he's escorting gets attacked by partisans. Hasegawa goes missing: everyone thinks he's dead. Miss Li goes back to the scenic spot where they'd been so happy and tries to kill herself. But Hasegawa appears and the lovers are reunited.

There are further sub-texts to the film. It's not nearly as simple as it seems. The actress, Li Xianglan, was considered a traitor. It turned out that she was in fact Japanese, though born and raised in China. After the war she returned to Japan and to her Japanese name Yoshiko Yamaguchi. She made more movies and ran as a member of Parliament.  The film, directed by Osamu Fushimizu, was only one of many made for the Japanese market, which was fascinated by anything Chinese. Their military might be in the process of ripping China apart, but like western colonial powers, they thought it was in China's best interests. As so often, those who "love" a place, don't "love" its people other than as tourist fantasy. 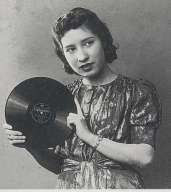 Indeed, the film itself "colonizes" and appropriates for itself a song written much earlier by a composer who wrote "serious" western classical music as well as popular music and music for film. The song was first recorded by Hamako Watanabe, 渡辺はま子(1910-1999) (pictured left) who was a real classical music singer, unlike Li Xianglan who was an actress who could carry a tune. Watanabe also sang it in another Japanese movie, which I've seen but which isn't now available. She sang it in a concert setting, with great dignity. Watanabe, who had iconic status, cannot have been too impressed by Li's warbling.  But the real shame was to come later, when the song was further exploited by American GIs who dreamed up offensive, bowdlerized new lyrics that demean women, orientals and anyone else for that matter. "Colonialization" all over again.These things need to be dealt with. They aren't issues of  the past but still happening in different forms all round us.

Please see my post on "Gloomy Sunday" another popular song that bears little resemblance to the original. Also, see my numerous posts on cultural stereotypes, Japan and China, Japanese and Chinese music and film.
at August 29, 2013

Don't worry, the Japanese people will pay for what their grandfathers enjoyed. The song is taught in my wife's ukulele class. The uke people are mostly Japanese Americans and are unaware that anything is wrong with this song.

No need to pay, these things happen all overthe world. For Japanese this song was a mega hit, so everyone loved it. For Chinese, not so happy. It's lie watching Hollywood war movies where all orientals are unscrpulous and dangerous.