Stockhausen Klang at the Roundhouse 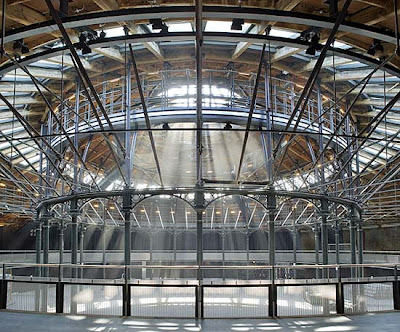 The Royal Albert Hall isn't the only round powerhouse for music in  London. Karlheinz Stockhausen's mega saga KLANG is coming to the Roundhouse NW1 on 22nd August. Kathinka Pasveer, Stockhausen's muse and interpreter, will be on hand to recreate four of the 24 hours of Klang. For maximum impact, Stockhausen needs to be experienced. It's not enough to just listen. The Roundhouse, being round with a high dome, resembles a spaceship, which is utterly appropriate since Stockhausen believed that he came from the star Siriius. His horizons were extra-terrestial. At the Roundhouse, we'll get the right cosmic vibe.

Together with the London Contemporary Orchestra (Hugh Brunt), Kathinka will be bringing us Paradies (hour 21), Hoffnung (hour 9), Balance (hour 7), and Cosmic Pulses (hour 13).  Cosmic Pulses was a fantastic success at the Royal Albert Hall in 2008. Read about that HERE. The Roundhouse isn't quite so huge but it should be fascinating. Hoffnung, Balance and Paradies are London premieres, the last in a new version for 8-track mixing. .Before Stockhausen, the Roundhouse is hosting a performance of Claude Vivier's Zipangu. This too is a remarkable piece of music by an esoteric composer, one of my favourites. Read about his  Orion, Kopernikus HERE.  Vivier worked with Stockhausen but was not one of the hard-core obsessives. His music is oddly exotic, even beautiful. Zipangu is an ancient European name for Japan, (not a Japanese name) so the piece is an exploration into exotic mysteries. Brunt and the LCO are quite into Vivier and Gerard Grisey. I wrote about their 20111 Spitalfield's performance HERE.  Also please read about this year's Stockhausen Prom 11 on the subject of Stockhausen's concepts of space and sound.  Stockhausen was the great great grandad of sampling and DJ mixing. All the more reason to catch Stockhausen at the Roundhouse, where dozens of legendary gigs have happened since the 1960's. Loads on Stockhausen on my site. Mainstream classical audiences are often too uptight to relate to Stockhausen, but he's extremely important as a conceptual artist.