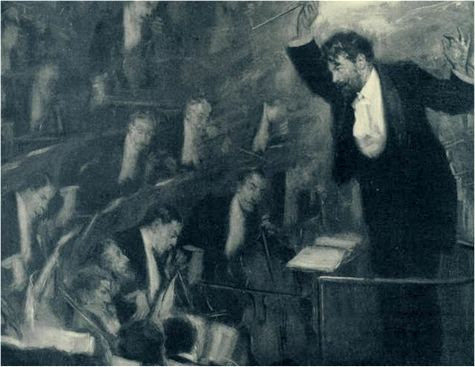 In BBC Prom 52. Sakari Oramo presented a triumvirate of British composers: Elgar, Bantock and Sibelius. Sibelius, British? You might think not. But Sibelius's British connections were strong. Sir Henry Wood, father of the Proms, promoted Sibelius with vigour (that's him in the picture, from 1907). The Proms helped put Sibelius on the map, to the extent Finnish Independence might not have succeeded but for the huge international profile the composer had gained for his nation. So when Proms directors are criticized for promoting new music they should remember that it's long been part of Proms tradition. Sibelius's Violin Concerto in D minor was premiered in 1907. Lisa Batiashvili played at this Prom. What history rested on her shoulders! But she's a veteran with this piece and carried it off with totally assured, stylish energy

Sibelius is one of the BBC's "selling points" re Granville Bantock, so perhaps it was wise to bracket it with Bantock's Celtic Symphony. It's a tone poem, more atmospheric than structural. Scored for six harps and strings it could hardly be less romantic. One melts in the mood of mystic wistfulness, musing on mists of magical miasma. I use these words advisedly. If this symphony were colour coded, it would be vivid purple. I'm actually quite fond of it, but it belongs in the realm of daydream, rather like the Arthurian fantasies that might have inspired it. You're supposed to swoon and not examine too closely. It's hard to believe that it was written in 1940. Nonetheless, whole new generations have become hooked on fake Celticism through video games, Goth music and New Age babble so perhaps its time has come

Bantock was a "Celebrity Personality" before the term was invented. He is perhaps best remembered for his extravagant, eccentric persona rather than for what he actually wrote. Just as fashionistas define themselves by the labels they wear, Bantock adopted exotic subjects to give his work colour and flamboyance. But unlike other composers, he doesn't use exoticism as a springboard for exploring new musical territory. When I listen to Bantock, I swoon, but think of Liberty's, not liberty.

Sakari Oramo established his Elgar credentials  when he took over the City of Birmingham Symphony Orchestra after Simon Rattle had built it up. Birmingham is an Elgar stronghold, and Oramo absorbed the Elgar idiom so well that he's become one of the foremost Elgarians of our time. His traverse of the symphonies during the Elgar Centenary year is still spoken of with reverence. Oramo's Elgar is distinctive. He shows that there's infinitely more to Elgar than pomp and circumstance. This performance of the Enigma Variations was subtle, connecting to the intimate, secret portraits which inspired it, and the private circumstances in which it was written.

At Prom 51, the previous evening, Daniel Harding conducted the LSO in Elgar's Symphony no 2. Listening to that again, without being ovewhelmed by the magnificent Britten Les Illuminations  (reviewed here). that went before, I realized how well Harding expressed it as pure music. Maybe some people want their Elgar butch and bloody, but Harding's Elgar is a real surprise for those willing to listen in a different light. Harding's delicate sensitivity brought out the melancholy in the piece, even the suggestions of tonal ambiguity. Given that that Prom was dedicated to the memory of Colin Davis, it was totally appropriate. Harding doesn't get the respect he deserves because he's very different, but he's a master in his own way.
at August 22, 2013