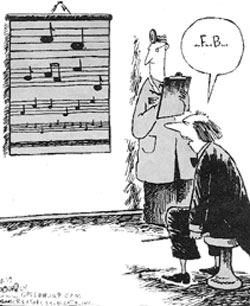 The BBC Proms are half over but I only noticed this week, when someone pointed it out, that they aren't doing programme notes online anymore. Perhaps the idea is that people will be forced to buy programme booklets when they attend, But the rationale is flawed. Surely more people listen to broadcasts than can ever fill the hall? What about listeners too far from London to commute, or those who live in faraway countries ? In any case, not everyone who attends buys a programme.So to boost the sales of a few extra booklets, some beancounter at the BBC deprives thousands more of a chance to find out more about what they're listening to. Which beats the whole purpose of the BBC remit to educate and inform and reach out to wider audiences.

There are many good reasons for NOT having programme notes. It drives me crazy to see faces buried in booklets when ears and minds should be absorbing the music. It's much better NOT to follow every word or note, but instead open your heart and mind. Familiarity will come with time. Never miss the opportunity to engage with what the performers are expressing. Programme notes can encourage lazy thinking and lazy writing too, for that matter (unless the notes are by the composer or someone who knows the subject well enough to have something useful to say, in which case they need to be preserved.)

In theory programme notes (and not just the BBC's) should be a way of enhancing the musical experience.  In practice, programme notes are often "filler", so superficial as to be downright misleading. Sometimes I've read things by people who clearly haven't even heard the piece they're writing about, and chunks of material borrowed without attribution. They can get away with it because programme notes are ephemera, designed to be, like their medium, discarded and often unread. Most programmes exist so promoters can sell advertising.

But notes should serve a purpose. When people have taken the trrouble to come to a concert, they deserve some form of extra enlightenment.

During a recent Prom, a friend overheard a conversation at the first interval. "Is it over already?" some tourists asked.  "We don't know what this is is about but WE'RE QUITE ENJOYING IT". I thought it was wonderful that they could be so open-minded that they could approach Wagner and get pleasure from just listening. They were exactly the sort of listeners we should encourage. In their case, telling them to look at programme notes would be a mistake. Rather, it would have been nice to talk to them about how they felt and why the music was so exciting. "Wait til the end", I would have said. "Everything goes up in flames ". Capture people's imaginations and they can sit through six hours of singing in foreign, Or kill their souls with lousy advice.
at August 18, 2013

Roger says:
It seems to me the BBC beancounter you portray is even more pettily mean-minded than you suggest. Erosion of programme sales at the venue in previous years was covered by the fact that online programmes were not available until after the concert -- or at least until the concert was under way (I can't remember which). So the only loss would have been of customers who went to the concert and waited till they got home to read the programme on line.
As a cost-cutting exercise -- or is it just pure laziness? -- removal of the online programmes would not have saved much money. Once the system is set up, creating an online PDF is only a mouse click away when you are preparing a PDF for the printers.

I am a regular prommer who used to browse the programme notes when I got home. As I already spend £15 on rail fares for each concert, I'm not going to pay for a programme that I will probably only read afterwards becasue, as you say, I don't want to be distracted from the music while there, and in the interval there are usually too many interesting people in the area to chat with.

In a reply to complaints on their Facebook page, the BBC cited the fact that they couldn't find a solution that worked on all devices as a reason for not putting them online. They previously used a Flash-based reader to stop people downloading the notes. Funnily enough, this year they produced some sort of free interactive Proms guide that only worked on Apple iOS devices. Funnier still, iOS is the one platform that can't view Flash. Make of that what you will. The best solution would indeed be to put PDFs online, and only after the concert to stop people printing them out and damaging sales. PDF is standard, they could be viewed on all devices.

Not only can I no longer read about the music I've heard (and have to make do with information from Wikipedia) I'm sad that I can't see the list of orchestral players. I feel the BBC is denying them a fair credit, a bit like cutting the credits from the end of a TV show. But then the BBC likes to squash credits up so you can't read them and talk over the theme music, so what should we expect?

Thank you Jonathan. Roger (see above) wrote to the BBC and got a dumb reply. Let's get something rolling.

The BBC response I had follows very much the line that Jonathan describes as having been put out on the Proms Facebook page. It read:

Jonathan is also right about PDFs. These are universally readable on all systems. Why was the BBC obsessed with finding a format that couldn't be saved or printed out? (Pages can of course be saved by taking a screen grab anyway.) Once you release information, you release information. So don't do it grudgingly. Or did advertisers in the printed programmes complain?

The BBC's sales of printed programmes was protected by the online programes only being available after the concerts. To produce PDFs wouldn't be so "time-consuming" since it could be readily integrated into the production workflow of the printed version. it would be just a matter of stripping out the ads -- no big deal since they are in blocks around the editorial text and not within the editorial text.

Not only would the online programmes give the sort of information that Jonathan wants after a concert, but also information for radio listeners and TV viewers who of course make a large contrbution to the funding of the Proms through their licence fees but at present only have available the extremely sketchy notes on the Proms website.

The BBC could also usefully start adding PDFs of programmes to their archive of historcal information on Proms concerts, which they laud, but which is pretty sparse data as a historical source,