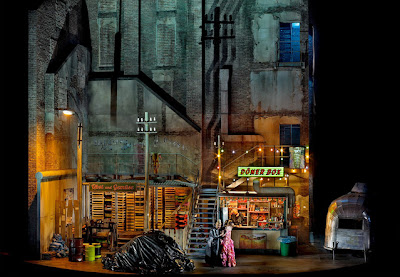 Götterdämmerung at Bayreuth, 2013: Wagner's Holy Grail. Kyrill Petrenko conducted with authority. In Siegfried, his dense textures and firm tempi evoked vast rock formations and impenetrable forests. In Götterdämmerung, the atmosphere changes. Now Petrenko's tempi became sharper. The orchestra zipped urgently forward, creating the tension and anxiety we should feel as the Ring draws to its conclusion. When Siegfried greets the Rhinemaidens, the music flows lyrically. But the undertow in the orchestra reminds us that all will soon end. The Rhinemaidens sound sweet and innocent, but the whole saga might not have happened if they hadn't been more attentive to the Ring in the first place.

And so, we, too, should be more attentive with what we have. These days, opera audiences are bear-baiting bullies, who go for the pleasure of being abusing. There is no such thing as non-interpretation. Even when we read a score, we are "interpreting" the relationship between the marks on paper and what we hear in our minds. Love or loathe a production, it's someone's point of view. In normal life, people can disagree rationally. But shouting others down on principle is the mindset of the mob. Opera houses used to restrict photos before a performance so people wouldn't make up their minds  beforehand, based on minimal knowledge. Screaming abuse is easy when you don't care about what people say.  So I've listened audio-only, avoiding the pictures, in order to focus on the music. The Ring suggests that we should go back to true values. And in Wagner, true values pivot on ideas.

Siegfried in Götterdämmerung is very different from Siegfried in Siegfried. The tessitura's less of a stretch, but characterization is more of a challenge. Once, Siegfried was a blank, now he's tasted the ways of the world and is sucked into its material values. Lance Ryan's deliberate, clear diction served him well. No need for decorative frills. This Siegfried could be a better master of the Hall of the Gibichungs because he's firm and decisive. No wonder Gunther and Gutrune are entranced.  Siegfried's just easily fooled but, as Ryan shows, he's direct and without guile. In his scene at the rock with Brünnhilde, Ryan';s voice takes on a metallic edge which is perceptive, for Siegfried is controlled, robot-like, by someone else. When he sings the word "Brünnhilde" before he dies, Ryan breathes into the word, so it expands with real emotion. The "spell" is broken, but too late.

In this performance, the relationship between Siegfried, Gunther and Hagen was less evenlty balanced than in Barenboim's Proms Götterdämmerung (more here) because Ryan was clearly the dominant force. Attila Jun's Hagen gives him a challenge, though. When the trombones, horns and tubas wailed in the dream sequence, Jun's voice hardened, suggesting suppressed rebellion and rage. Jun's an interesting singer, who can convey feelings which aren't strictly obvious in the text, but which colour character. For example, when Gunther casually dismisses Hagen when he and Siegfried go to kidnap Brünnhilde, Jun's voice almost imperceptibly flinches. He obeys but he's not happy. I didn't see him grab the ring from Siegfried's body  but I could sure hear the violence when Jun sang "Her den Ring!"
Alejandro Marco-Buhrmester's Gunther is more reserved, closer vocally to Koch and Ulrich in Siegfried (more here) The rest of the cast was nicely done, but the chorus was particularly good. They really sounded like a mob of thugs perpared to do whatever their leaders tell them, even when they cry "Was tatest du!"in horror.

In Götterdämmerung, Brünnhilde's part is infinitely more demanding than in Siegfried. At last we got to hear what Catherine Foster is capable of. While she's not the most complex or heroic Brünnhilde one could imagine. her voice feels sturdy and forceful. Since she's spent her career in German-speaking countries, her voice was new to me, but she's interesting. Certainly she has stamina. This Immolation was grand, and Petrenko's orchestra excelled itself, describing the soaring, redemptive flames, complete with flying embers.
at August 01, 2013