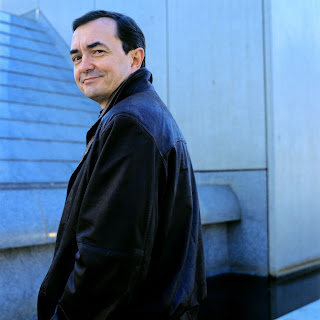 
"The acclaimed French pianist Pierre-Laurent Aimard gave a totally stunning recital yesterday at Edinburgh's Queen's Hall as part of this year's Edinburgh International Festival. Arguably the most musically excellent performance as yet of this year's Festival, his standard of playing was an honour for the Scottish capital.

In a generous programme, Aimard alternated a selection of Debussy's Preludes with a selection of Ligeti's Etudes, of which he is perhaps the greatest living interpreter. Of two of the Etudes performed here (Entrelacs and Der Zauberlehrling), he is the dedicatee. He has recorded both these and the Debussy Preludes .

Aimard's playing developed into the programme, coming to the fore in an excellent account of White on White (named for its exclusive use of the piano's white keys), then going from strength to strength. Fem (Ligeti), Les sons et les parfums tournent dans l'air du soir (Debussy) and especially L'Arc en Ciel (The Rainbow – Ligeti) stood out for me in the first half. This closed with the extended prelude Automne a Varsovie, its melancholic tone reflecting both the mood of the that time year and the political circumstances of that city at its time of composition. Its title and content both reference the Polish composer Chopin.

In the second half, En suspens -which has a syncopation not dissimilar to Arc en Ciel, Brouillards  (fog) with its unique dissonant ending and Entrelacs were particularly enjoyable.The alternation of works of different styles through the performance was reminiscent though also of another recording – also featuring Ligeti – in which some of these Ligeti Etudes were performed in alternation with traditional Pygmy music. The Debussy Preludes have been both recorded on Deutsche Gramophon and performed live by Aimard at last year's Proms, concluding the Cadogan Hall Monday lunchtime chamber music stream of programming.

That concert concluded with the Feux d'artifice (Fireworks) prelude, which depicts in music the closing finale of the firework display in Paris for Bastille day, the nationalistic sentiments  of the occasion being referenced in strains of La Marseillaise. This piece is a wonderful finale and therefore inevitably a hard act to follow. The account given yesterday in Edinburgh was if anything even better than that last year in London, and the attempt to include further material afterwards was perhaps not entirely satisfactory. It is very understandable that the longest and very dramatic L'escalier du diable, inspired by struggling through a sudden Pacific storm on a bicycle, was seen as the culmination of the Ligeti series. However it might be argued that this could have been used to conclude the first half of the concert, and to finish as before with the Fireworks.

However this is a very minor point regarding a performance of quality which can only be described as superlative. It was broadcast live on BBC Radio Three and remains available via the iPlayer for another six days. I cannot recommend it enough."