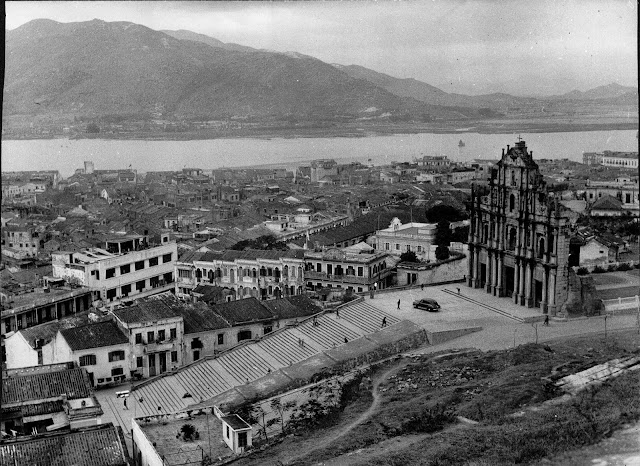 These are the ruins of St Paul's (São Paulo) Church in Macau. This picture (1961) shows something of the scale of the cathedral: it must have been awe inspiring when it was built, around 1600, when Macau was little more than a scattering of small houses. In fact the town itself was smaller then, as most of the land in the middle of the picture did not exist at all (that part of the city was built on land reclaimed in the 1920's).
CLICK ON IMAGES TO ENLARGE - very high resolution details.

In its glory, São Paulo was 37 metres long, 20 metres wide, 11 metres tall. Imagine coming up the Pearl River from Canton, and seeing this structure loom into view! Once, when you stood at the top of those steps you could see across the delta to the open sea.

In the 16th century, the Jesuits made about 200,000 converts in Japan, so many that it threatened the Tokugawa hegemony. The converts had to revert or be exiled. Those who could afford passage came to Macau, swelling the population by tens of thousands. The bones of many Japanese martyrs were interred under the floor of the church, so it had emotional as well as spiritual significance for the refugees. Ironically Macau was again swamped by refugees after 1937, when the Japanese invaded China. This time the refugees were Chinese, and Macanese who'd emigrated to Hong Kong and Shanghai. The tiny town was teeming with the displaced, near collapse. "God will provide" said the local bishop. No one was turned away.

The facade and steps are all that remain, for the church burned down in 1832. The interior was elaborately decorated with paintings, ivory, lacquer, gold and silks, but the walls were made of chunambuco, a mixture of shells, stones and clay, typical of the area where there aren't forests to provide timber. All the early churches burned down regularly - candles and matshed (bamboo and reed panels used for building) don't mix. The fire, which also destroyed the Jesuit library and part of the 16th century Monte fort, must have lit up the sky for miles. There are legends about secret tunnels under the church leading to the fort but they've never been found, not even after extensive redevelopment. 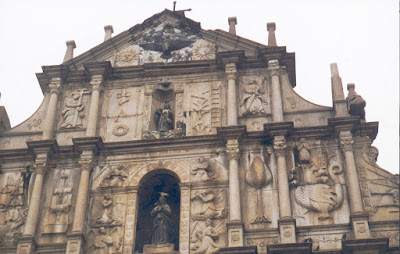 On the facade, there are conventional religious symbols, like the metal cross on the pinnacle, a finely carved dove below. Look at the sun and moon on each side - especially the sun, which has a happy face. On the second tier down, there's a fairly typical Iberian Infant Jesus, dressed in robes, but at his side are the implements used as he was tortured on the way to the cross : a whip, a crown of thorns, nails, a ladder. This would have been specially poignant, for many of the Japanese martyrs were killed by being crucified, like their God. Unlike Christians in Europe, these Japanese craftsmen probably had first hand knowledge. 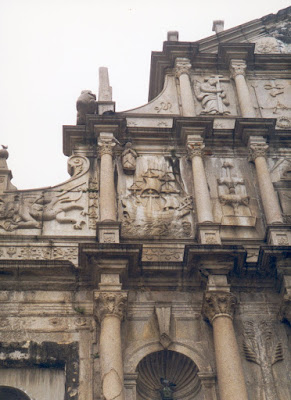 The next tier shows a large bronze Virgin Mary, surrounded by six angels - these angels being the symbol of Macau. Yet on one side there's an exotic palm tree and on the other a baroque fountain. Beside the fountain is a carving of a Portuguese ship, without which there would have been no Descobrimento, no adventures to the East and to the new world. Next to it is another dragon, more serpent-like and Japanese-looking. There's an inscription carved in Chinese (not kanji) identifying it as the Devil vanquished.
On the right side of the Virgin Mary, there's a strange dragon with seven heads and two legs. It's neither Japanese or Chinese - did the idea come from India, or from books? On the monster's head is a small image of the Virgin Mary, so the inscription reads "The Virgin Mary tramples on the dragon's head". Beside this dragon, there's a skeleton, beautifully carved and leering madly, a macabre but pertinent memento mori. "Remember death and do not sin". 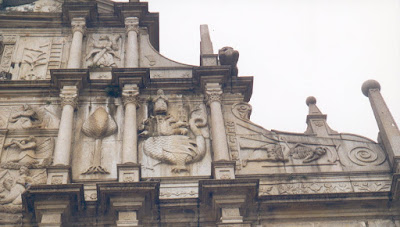 The facade faces west, towards the sea and towards Rome. But due west of Macau is the island of Sanxian, where St Francis Xavier passed away, dreaming of China. He wasn't a saint yet, but was so revered that barely 50 years after his death he was commemorated in one of the bronze statues on the lowest level overlooking where the ornate doors stood, as if he were welcoming those who came to pray.

Other Jesuit heroes are also depicted in bronze on this tier above the doors These are St Ignatius Loyola, Francis Borgia and Luis Gonzaga. Other orders put their saints on plinths, so it wasn't so unusual for the Jesuits to do the same. These statues were a reminder of "living faith", the concept that their mission was in the present, not the past. It's a powerful statement. Connected to São Paulo was the massive Jesuit library and seminary which was the main interface between China and the West, supporting dozens of scholars, translators, teachers, collecting research materials. Other big Jesuit saints like Adam Schall and Matteo Ricci aren't there, because the church is so early that they hadn't even arrived in Macau when it was built. Long before they became saints, as ordinary men they would have stood on the stone steps, looking at the church, understanding its imagery. Little do the hordes of tourists know who was there before!

Over the doorframes on the entry floor there are carvings of the Jesuit seal, IHS surrounded by sunbeams. Macau was a rich prize, so the Dominicans and other orders wanted a piece ofv the action. Eventually the Jesuits were kicked out of Macau when the order was suppressed in Portugal. But the Jesuit impact was profound. Monastic orders were never able to dominate Macau, which is just as well as they were less China-centred. While Christians might be able to convert by force, as in South America, it would not have been possible in China. In China, learning is revered above all: scholars have moral authority, soldiers are the bottom of the heap. So even though the great Jesuit library burned to the ground, it symbolized something far different from what would happen later in the "age of imperialism".
at April 22, 2009

Thank you! It's written by a filha Macau. Lots of other posts on Macau

RE the dragon on the right hand side of the facade -- you might try looking up the book of Revelation in the Bible, 17.2-12. The idea did indeed come from a book. Seven-headed beasts figure fairly prominently in Revelation.

Wonderful, thanks Kieran ! No wonder it looks very non Chinese and non Japanese - it looks like a European woodcut illustration!