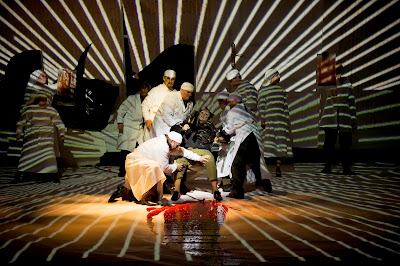 In this era of safe, timid opera, A Dog's Heart at the ENO might just be the tonic to liven things up. It's guaranteed to provoke extreme reactions. From Complicite and Simon McBurney, we couldn't expect anything less.

Mikhail Bulgakov's novel  The Heart of a Dog disturbed the Soviet authorities so much  they banned it for 60 years  The plot's seditious. Professor Preobrazhensky (Steven Page) is an eminent surgeon who adopts an abused mongrel from the street. The professor's apartment is a haven in a world that's disintegrating all round.  Everyone is scavenging to survive. Dog eat Dog, "Something's not right here" thinks the dog, hardly believing his luck. The Professor rejuvenates his patients by transplanting animal organs into them. Now, he wants to create a New Man from a dog.  Dog made Man becomes Poligraph Poligrafovich Sharikov (Peter Hoare) a beast, slovenly, venal and brutal. (Please read a more detailed synopsis HERE)

With a plot as surreal as this, don't expect conventional opera or theatre. All art is an expression of how an artist responds to something. We're there to listen to someone's point of view, however outrageous. A Dog's Heart is a new opera, yet we can still come to it carrying baggage about what things "ought" to be, Yet the whole plot plays with the idea of species, genre and gender bending. 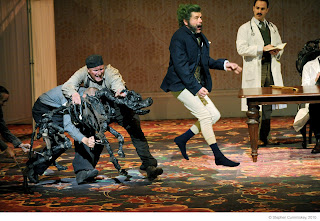 For a start it wasn't written in the usual way. Alexander Raskatov, the composer, worked with Simon McBurney and Complicite from the start so music, text and action are symbiotic. Raskatov's music isn't demanding so have no fears on this score. Its bark is worse than its bite. The presence of several big name composers in the audience is no indication of Raskatov's status in the avant garde. He's best known for completing Alfred Schnittke's Ninth Symphony. What he does do well is link music to text. 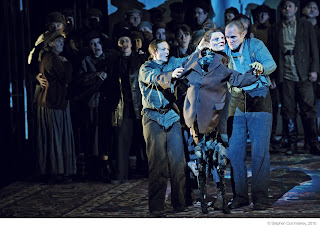 Because Sharik/Sharikov is an unstable chimera. so too is his music, constantly wavering in pitch  and volume, the vocal line unnaturally distorted. He's unnatural, after all, at any moment threatening to change form. He has two voices, one ostensibly "pleasant" (countertenor Andrew Watts) and one   "unpleasant" (soprano Elena Vassilieva, a "dramatic soprano"). On film, Sharik/Sharikov isn't hard to create but live theatre presents  unique challenges. No actor could shape shift that quickly or effectively. Hence the puppet dog, created by Blind Summit the cutting edge puppet company. Like Sharik, the puppet is manipulated into different forms, constantly changing. At one stage one puppet version is discarded for another. But realism is hardly relevant here,

Singers double in different parts. It's disconcerting as you recognize a voice but can't recognize the persona. But that's the story. Characters come and go, adding to the sense of instability, throwing the idea of narrative askew. Unless you know the plot already, it's confusing. But in real life, none of us really know the plot, either. 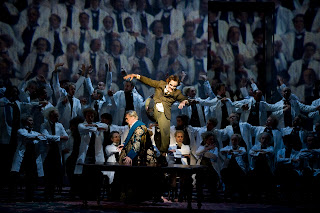 What this production misses is the strong political context of the original. Shvonder (Alasdair Elliott) and his agitators are reduced to ciphers. In theory that's valid because the basic drama is the Professor's Faustian misuse of knowledge, but the revolutionaries, grubby as they are, add dramatic tension. On the other hand, if the production were more overtly political, the pervading surrealism would be lost. What McBurney and Complicite emphasize instead is the fundamental idea of existential instability. They create the Professor not as a loner but as a representative of another mass, not as grubby as the proletariat, but no less certain of their Rights. The scene where the Professor explains himself to his peers (see photo) is very well done - this mob have white coats but they're also barking demented. 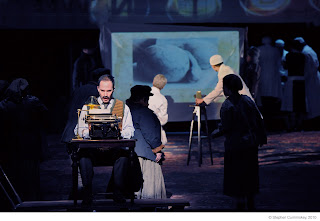 Similarly, McBurney downplays the incident where Sharikov unplugs the tap in the toilet and floods the apartment.  It's a powerful metaphor, but difficult to stage. Here, it's a weakness that adds nothing to the drama. Perhaps it should have been left out altogether, like some of the  minor incidents, like the Professor''s patients. Interesting as they are they aren't central to the drama. McBurney does, however, extend other elements in the plot in subtle ways. Dr Bormenthal (Leigh Melrose)  is seen meticulously typing up his reports, oblivious to the basic madness of their subject. Sitting at his desk, he's propelled across the stage from side to side the way old fashioned typewriters leap when you press return. Maybe that's lost on audiences brought up on PCs, but it's a good idea: Man as Machine, like Dog as Man. Similarly, Zina the Maid (Nancy Allen Lundy) becomes a big part. She shrieks, leaps and jitters. Woman as Puppy, just as disruptive as Sharikov the dog, which is perhaps why he tries to mate with her. On a deeper level, Zina is the "new woman" that appears in the novel, a hybrid that threatens the oligarchy the Professor and his peers maintain. Or isd she a comment on shallow modern society,? (Excellent performance despite the part being mad).

ENO's A Dog's Heart has its flaws, but its energy is a purgative for stodge. The anarchy of A Dog's Heart is an antidote. This is what ENO does best, shaking up complacency, freeing new ideas. A Dog's Heart is by no means Great Art but it's irreverent and fun, and better than much else on offer.

Photos Copyright : Stephen Cummiskey, courtesy ENO, details embedded.
Please read my other posts on A Dog's Heart the Movie and A Dog's Heart Preview
at November 21, 2010

I enjoyed reading this and I agree about the succinct but effective staging of the Professor trying to explain himself to his colleagues. If only more of the show had trusted to that economy.

Interestingly, in this edition of your post I read that you have the 'unpleasant' voice as Andrew Watts and the 'pleasant' voice as Vassilieva. It could be a typo, but you might be making a point..? It certainly fits with your later analysis of never quite knowing whose voice is whose.

Typo, corrected by co-editor, but it's true that they're distorting things thru megaphone etc. In the choruses you hear Andrew Watts and can't quite pick him up in the crowd, so it's like hearing the Dog in the mob.

Thinking further on Rasatov's music, the Schnittke connection is clear warning. Mega pastiche! But at least in the service of this work, it's fine as it illustrates the action, like cartoon music scamps around. And take the dog theme again, it scamps about like a hybrid mongrel. It's a Bitzer, bits of this, bits of that. As Sharikov says "My grandmother, she was a tramp, some Labrador in my line".

This is how opera should be. A complete integration of idea text music and theatre - complicite - the essential of theatre is here. Here the music supports and excites the action. Here the text is potent and pointed. It is serious but doesn't take itself seriously. This puts Thomas Ades into the back waters as an opera composer.