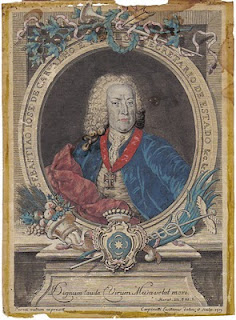 Ever-enterprising, the Guildhall School of Music and Drama staged a rarity, an opera called Spinalba by Francisco António de Almeida (1702–1752). Spinalba is the daughter of an old man Arsenio who goes mad when Spinalba goes into the wide world dressed as a man. She's doing it to chase her lover.  Cue for a complicated rococo plot, lovers in disguise, misunderstandings, cross-dressing and much else. It's billed dramma comico, but there's more depth to the opera than straight farce.

Note the opera's subtitle "The Mad Old Man" Spinalba herself is pretty much a  typical stock character (think Despina or Florabella) using a ruse to test a lover. Arsenio on the other hand is an old man, confronted by change and loss, who can't make sense of the world and is ridiculed. Egged on by those who should be caring for Arsenio, Togno the servant plays along with the old man's confusion.  But Arsenio turns the tables by trapping Togno in a magic circle, claiming he has supernatural powers. Who's the crazy one now?  Who can cure whom?  Love is a form of madness, too. The fascination of this opera is the way it plays on illusion and delusion, reality and non-reality.

At the Guildhall School of Music and Design Almeida's plot was set in a nursing home where the elderly are treated like objects rather than as people. These situations awoke sad memories for me, so I was uncomfortable, but maybe that's as it should be. "Care" homes often don't really care, even when carers are well intentioned. Just because people don't seem sentient, it doesn't mean they don't have to be treated sensitively. While I cringed at the petty humiliations the old folk suffered, much of the audience laughed hysterically. That in itself is a lesson. The GMSD crew (director Stephen Metcalf) and designer (Isabella Bywater) have clearly spent time in these situations too, so their observations are accurate. But they are trying to shock us into sympathy with the old folk. If the audience thought it was funny, it says something about them, not the production. Some of them were old enough that they'll soon face pain, bedpans, and walking frames. So why so callous? 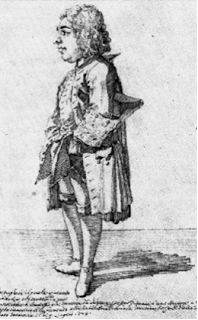 A play within a play  focuses the idea of delusion. The old folk seem to be rehearsing a play but can't remember their lines.  But it isn't just the old folk. Togno strums a ukelele and can't remember the words to his song, because the words aren't his but his master's. Life is like that, everyone rushing about pretending to be something they're not. Baroque audiences were sharper than they're given credit for. Almeida (pictured right) lived on the verge of upheaval. Lisbon was to be devastated by an earthquake, and rebuilt on clean "modern" lines by the Marquis of Pombal (pictured above) an enlightened, visionary by the standards of the time. No wonder Spinalba is becoming popular, especially in Portugal, which is and was by no means a backwater.

Some of the visual gags like the hospital bed worked extremely well, but others, like the line for the toilet, didn't. Almeida's opera isn't bad at all, but it keeps repeating format, which makes it drag. No stratospheric displays of vocal invention to dazzle (which is why Steffani's Niobe, Regina de Tebe worked so well). In  GSMD's student production that would be too much to ask.

What really would help is judicious editing. Cut multiple duplications, tighten the pace, so the comedy flows better. Timing is what makes comedy, But this was a student production and they don't have that level of expertise. So they had to go for visual gags. Part of what the Guildhall teaches is how to create drama from materials at hand. So in that sense, this production worked well because it elucidates meaning by finding universal context. If it's not perfect, it's a good try.

I think GSMD chose well in doing Spinalba because there are many substantial parts, most of them meaty enough to give each student a chance to show what they're capable of. There's relatively little interaction, so it can be rehearsed in separate parts, which probably doesn't help the dramatic flow but is practical from a training point of view. There's lots of range, too, comic and straight parts, slapstick etc. all of which will come in handy when the students move on. So there's a possibility it could be revived. Just as Spinalba tests her lovers, Spinalba the opera tests how well the students have learned.

On the night I attended, Spinalba was Anna Patalong, nice, clear singing. Koji Terada sang Arsenio. His acting's prescient, connecting to the feisty rebellion in the character beneath the "madness". Voices can be as individual as fingerprints. Terada's is - he's distinctive and memorable. Amy J Payne sang Dianora, Paul Curievici Ippolito, Matthew Wright Togno, Sylvie Bedouelle Elisa, Sophie Junker Vespina and Alberto Sousa Leandro. I'm still suffering that long lasting virus that's going round so I couldn''t manage the second half, but the first two hours were enough to show how good the performances were.

As for Almeida the composer, I'm interested in ordering a copy of his oratorio La Giuditta. René Jacobs conducts Concerto Köln, which is a huge plus. Singers include the gorgeous counter-tenor Axel Köhler so it might well be worth the exorbitant price!
at November 11, 2010

i call your attention to our recording of this beautiful work: