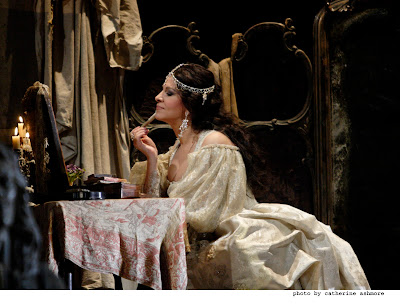 Everyone likes a chocolate rush sometimes. Francesco Cilea's Adriana Lecouvreur at the Royal Opera House London is  delicious indulgence. Everyone will be raving about the big name stars, the glamour, and the frothy chocolate box staging. "It's safe" people will sigh. "Traditional costumes!" But beware!   Photos deceive without proper context.

Adriana Lecouvreur can be" toffee" as some have suggested,. "Cilea makes Puccini sound as profound as Wagner". But everything's in the staging. David McVicar shows that beneath the candy coated artifice, there's savage irony. This Adriana Lecouvreur makes a mockery of surface appearances. But arguably, so does the opera though no-one has quite yet noticed past the frippery. 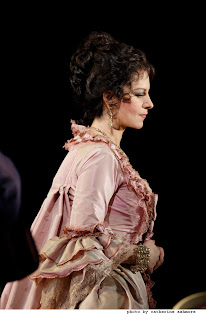 Adriana (Angela Gheorghiu) is a famous actress at the Comédie-Française. Most of the action takes place in the theatre. "Actresses don't live like other people" says the manager Michonnet. Illusion is their business. They shift between roles as easily as changing their clothes or make-up. But who is fooling whom and why? Michonnet (Alessandro Corbelli) loves Adriana but she doesn't get what he says when he tries to tell her. The Prince and Princess of Bouillon (Maurizio Muraro and Michaela Schuster) have affairs yet maintain the pretence of marriage. Maurizio (Jonas Kaufmann) pretends to be an ordinary soldier when he's in fact the Count of Saxony. And he's two-timing the women in his life. If Adriana hadn't fooled herself into thinking the dried violets were Maurizio's, she might have saved herself a lot of angst. This is an opera about the art of theatre, about image and delusion, rather than glamour and glitz. 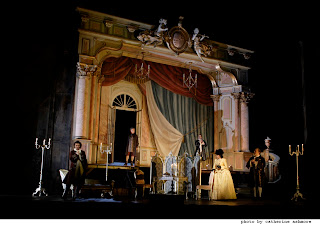 No surprise that the set designs are by Charles Edwards, exceptionally intelligent and pointed. The Royal Opera House stage becomes a series of boxes within boxes,  a theatre within a theatre. Sometimes we see the stars front stage when they're supposed to be backstage. Sometimes the ROH audience see things from the same perspective as the "audience" on stage, the mock theatre. Everyone laughs at the "dancers" some of whom are real ballerinas, some not. And then the masks come off, literally. Look at this photo of the set. The curtain isn't drawn back. It's painted, trompe l'oeil, designed to seem 3D when it's actually flat. And in the middle a "real" door through which people enter. You could look at these sets and be no wiser as to what they mean. Or you could think.....that's the real art of stagecraft. 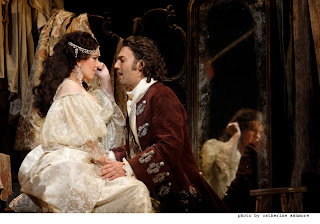 Adriana Lecouvreuer is a vehicle for Angela Gheorghiu, make no mistake. She's magnificent and she knows it too. Adriana was a diva and so is Angela. And who can blame her? Her star arias are lovely, and she gets to show how many different characters she can express, from trusting lover to the mad scene and dramatic death. But when she sings her final No, qua dentro è la morte! ... m'addenta un serpe il cor, she's utterly convincing and moving. Because she puts her soul into Adriana, she lifts the piece from performance to something heartfelt. 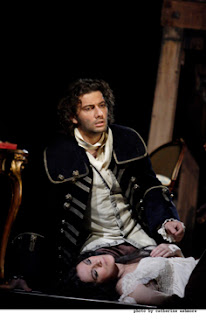 Fans were out in force for Jonas Kaufmann, the tenor whom opera fans think is a Lieder singer and Lieder fans think is an opera singer. His Lohengrin this year was amazing. I first heard him in Schumann Der Rose Pilgerfahrt, (1998) when he was singing both genres. So I don't jump on bandwagons. I thought he'd be an ideal Romantic hero, the ultimate in Rossini or Donizetti, roles which benefit from charm. Maurizio could have been tailor-made. At times there was a little tightness in his voice but it was soon dispelled by glorious climaxes when he needed them.  He knows how to pace himself well. And his looks! He simply has to flash a sidelong glance, raise an eyebrow and the audience, male and female, swoons. Cilea doesn't develop Maurizio psychologically but that's OK. The opera moves around Adriana and her dilemmas. 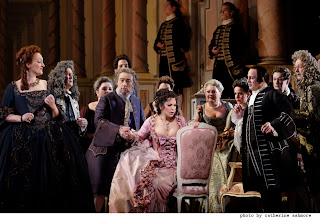 Or does it really ? Look atthis photo, focused on Adriana and the busy crowd. Who's in the background? Michonnet (Alessandro Corbelli) who appears in nearly every scene, even though he doesn't always get to sing big star numbers Because he's the Manager of the theatre, he's used to making things function well. He's a mover and shaker, but can't get his way in love. Yet he's altruistic, helping Adriana even if it means losing her to the man she really loves. A much loved buffo. Corbelli told me how he envisaged Michonnet, but I was still surprised at how much depth and dignity he brings to the role. Moreover, he does it quietly, without fuss and flash, the mark of a true character singer. Corbelli's Michonnet is a lot more than factotum. In many ways, the really tragic role in Adriana Lecouvreur is Michonnet. He's the man who fixes things for other people, but can't fix things when he really needs to.  Presumably Maurizio can find another woman as quickly as he's dumped the Princess, but chances are that Michonnet, whose business is illusion, can no longer dream.

There's lots more to be written about this fascinating production. such as Mark Elder's conducting, so lucid it makes the music sound good. There'll be one soon in Opera Today  by Ruth Elleson who has interesting things to say about the music and singing. She was at the last London production of this opera, which can't have been as good as this one at ROH, so please read what she says.

Something as sumptuous as this can only be produced by large houses, in this case a joint production with Vienna, Barcelona, San Francisco and Opéra Bastille. It's going to be a huge success because it looks so good. But its real success is the way it subverts superficial appearances and finds something much more  profound in the work. Perhaps someone could say "That's not what Cilea intended! Cilea wanted fluff!" And maybe so. But this is an Adriana Lecouvreur that's less mindless than it looks.
(photos COPYRIGHT Catherine Ashmore, Royal Opera House, details embedded,  please don't borrow)
at November 19, 2010

Oh good, thanks so much for this review. I'm coming to see this in a few weeks and the photos made me worry that it was going to a fussy museum piece. I should have trusted McVicar more; I'm glad to hear there's more to it than that.