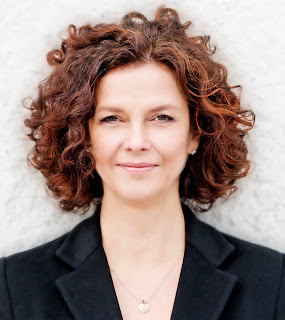 Angelika Kirchschlager and Malcolm Martineau at the Wigmore Hall showed what real Lieder singing should be : intelligent interpretation, intense focus on meaning. Of course Lieder can be enjoyed on a superficial level as pretty sound, but there's infinitely more to the genre. There are celebrities of whom it's said that opera fans think they're Lieder singers, and Lieder fans think they're opera singers. Not so Kirchschlager, who is superlative in both genres.

This was an unusual programme, far more difficult to carry off than might seem in theory.  Instead of going for surefire hit material, Kirchschlager and Martineau chose material that showed how fertile German song writing was in the decade 1830-40. These are most certainly not "Victorian parlour songs" since they were written for sophisticated, intellectual audiences who often knew the composers and poets well. Fanny Mendelssohn gave regular recitals at home, which often were attended by the liveliest minds in Berlin, and were so popular that the house was extended to cope with their guests. Salons like these were the normal way artistic people converged. The Schubertiades were not unique.

Felix Mendelssohn's songs about Spring are gloriously ecstatic, Frühlingstrunknen Blumen, spring-intoxicated flowers, not merely decorative but a metaphor for vibrant new life after a hard winter. Kirchschlager's voice rises lithely, then dips sensuously round words like Nun muss sich alles, alles wenden. All things must change and winter will return, but Mendelssohn embraces the moment of energy. Kirchschlager's perception brought out the link between the Spring songs and the second set of Mendelssohn songs. Auf Flügeln des Gesanges, for example, is sensual. Then a real stroke of good programme planning. In Neue Liebe, the queen of the elves appears and smiles enigmatically. Is it new love, or death?

This reinforces the meaning of Franz Paul Lachner's Die badende Elfe. Most people have heard of Lachner in connection with Richard Wagner, who ousted him  from Munich. His song cycle Sängerfahrt op 33 dates from 1831-2 when he still lived in Vienna. While Lachner was influenced by Schubert, whom he knew personally, Lachner's songs evoke earlier traditions,
for example, the songs of Carl Zelter who introduced to Goethe the young Felix Mendelssohn. Since there'll be more Lachner at the Wigmore Hall next month, please see what I've written about Lachner's Sängerfahrt HERE

There are some wonderful songs in Lachner's Sängerfahrt, though Kirchschlager sang only four, probably wisely as some don't suit female voice, but how beautifully she created them ! Die badende Elfe came vividly to life, Martineau playing arpeggiations that sparkled like water and light. Kirchschlager's timbre is clear, bright, almost trembling with excitement. A man spies a water nymph bathing in the moonlight. Since the poem is by Heine, expect deeper meanings. Kirchschlager shapes the phrase "Arm und Nacken, weiss und lieblich" sensually. What's turning the poet on is implicit, especially since Lachner wrote the songs for his bride-to-be. Pure, chaste but erotic.

As Kirchschlager said, it's hard to forget Schumann's Dichterliebe settings of Im Mai and Eine Liebe, but she did Lachner more than justice. I've heard three versions of these songs and thought I knew them well, but Kirchschlager's a revelation.  Her lucidity eclipses all else. Martineau's playing, too, convinced me that modern piano isn't necessarily a bar to freeing the energy in these songs. Explicitly Schubertian elements in Die einsame Träne might sound derivative, but Kirchschlager sings it with conviction. The "falling tears" in the piano part work well because Martineau is light of hand and pedal.

Three of the Fanny Mendelssohn songs heard here come from her Op 1. They're not early works, but the first published, which was  a daring act for a woman of her status. She was a pianist rather than a singer, so her songs give Martineau a chance to bring out their best qualities. In Schwanenlied, for example, slow, graceful movement, and the ending dissolves mysteriously. The poet's Heine, whom Fanny met and disliked,  but the song captures the foreboding behind the shining surface. On the other hand, in Warum sind denn, die Rosen so blass, she replaces Heine's Leichenduft (stink of a rotting corpse) with the word Blümenduft (scent of flowers).

Kirchschlager and Martineau also chose Carl Loewe's setting of the Chamisso poems Schumann made immortal in Frauenliebe und Leben. Here, Kirchschlager filled lines like die Quelle der Freudigkeit with such warmth that even the most fervent feminist could not doubt its sincerity.  Martineau made much of the almost Brahmsian richness in the piano part, particularly lovely in An meinen Herzen. Since Brahms was at the time only three years old, it's an indication of how significant Loewe was, and why the music of this decade, 1830-40 is underestimated.

Loewe's songs are vivid and imaginative. Two songs from Vier Fabbelieder op 64 (1837) gave Kirchschlager a chance to show what a vivid character singer she can be, combining her opera experience with true Lieder singing. Der Kuckkuck uses the same Wunderhorn text that Mahler would set fifty years later. Thanks to Kirchschlager, Loewe's cuckoo is funnier, even if the donkey cry, Ija ! Ija! isn't quite so obvious. More of a challenge was the long strophic ballad, Der verliebte Maikäfer  (Glow worm in Love). A  foppish glow worm courts a fly but is too vain to see she can't stand him. Nice growly sounds to create the lumpen bug, light sharp sounds for the fly. The punchline comes at the end, when the story changes - two (human) lovers about to fool around at night. The story's complicated, but Kirchschlager's diction is so clear that meaning comes through even if you don't know German. This is where her experience shows. She acts through her voice, expressively, never losing the sharp wit beneath  the charm.

This concert was being recorded for future broadcast and hopefully for Wigmore Hall's own label release. A must for anyone seriously interested in Lieder.

HERE is the full version in OPERA TODAY.