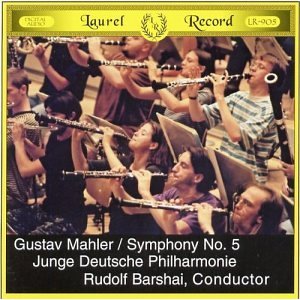 Rudolf Barshai died Tuesday. He was a violist, who founded chamber ensembles and the Moscow Chamber Orchestra. As a conductor, he was prominent enough to premiere Shostakovich's 14th Symphony in 1969. Despite his status in Russia, Barshai emigrated to Israel in 1976.

I didn't discover him until 1999, when a recording he'd made for an extremely obscure independent label started getting attention. Laurel Record, not Laurel Records, note, that's how small-time it was.  Barshai conducted Mahler's 5th Symphony with the Junge Deutsche Philharmonie. It was a word of mouth success because Laurel didn't have marketing clout or even proper distribution. In many ways this rarity value added to its mystique because there was no Amazon in those days.  Also, the idea of youth orchestras was relatively new, too, not like now when they're everywhere and praised for emotive reasons, regardless of how they actually play. So in 1999, we adored Barshai's Mahler 5 because it was so fresh and different.

It's a live recording, and the players are above average. Some have gone on to bigger things. But what's good about it is that Barshai manages to combine youthful enthusiasm with sensitivity and discipline. Not rough and tumble hyper emotionalism, but an understanding of form. Barshai's background as a soloist and chamber musician helped him understand the sophistication in this symphony, while inspiring the young musicians to play with intense passion. As the years have passed, there have been better M5's but this one has an innocence that's still appealing. Barshai also went on to write a performing version of Mahler's 10th Symphony which is less rounded than Cooke 3, which is now standard. Both were issued as a set by ultra cheap Brilliant Classics in 2002.  (They also issued the complete Shostakovich Symphonies – a box for under £10). Time has tempered my enthusiasm but they're still worth hearing because they're fun and a reminder of simpler times.
at November 04, 2010