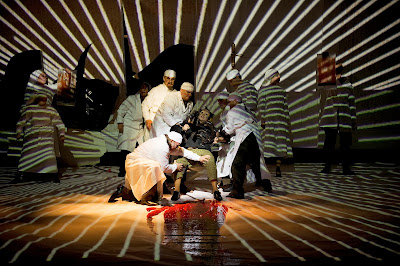 "It's a kind of Frankenstein, but with a twist", says Simon McBurney, of the opera A Dog's Heart opening this week at the ENO, London.

A homeless mongrel is saved from the street, but is operated on by a mad scientist who turns him into a man. But the New Man doesn't turn out quite as planned. So he's turned back into a dog. Alexander Raskatov's A Dog's Heart is based on a 1925 novel  by Mikhail Bulgakov. The implication is that social engineering doesn't work any more than species engineering,. More radically, the story of A Dog's Heart relates to the nature of man and beast. You can read the novel or watch a Russian film, complete with English subtitles in full on Youtube. The film's atmospheric and shot in sepia to look antique,  but the story transcends time and place.

A Dog's Heart is worth seeing because it's a joint production with De Nederlandse Opera,  premiered at the Holland Festival in Amsterdam in June 2010. The Holland Festival is innovative, but its standards are extremely high, so we're truly fortunate that the ENO is bringing productions like this to London. There isn't anything quite as progressive in this country at the moment.  Co-productions with De Nederlandse Opera, the Vlaamse Opera and the Bayerische Staatsoper, Munich could transform the ENO's status as a European house.

Simon McBurney has known Pierre Audi, the Holland Festival Director, for years. McBurney's creative team Complicite are innovators, too. They don't do bland, boring or safe. This production was created through hands-on involvement by the composer and members of the cast, so it's quite different from bringing in a director with no opera background to style a standard work. It seems to be evolving through realtime experience. 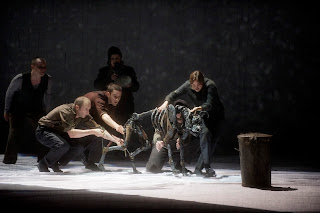 Theatre fans flock to Complicite productions like A Disappearing Number and Shun-kin, so perhaps opera fans are now in for a treat. Because the story is surreal, it lends itself to surreal treatment. Look at the Dog in the photo - he's a puppet created by Blind Summit who created the child in ENO's classic Madame Butterfly (Minghella)  That child upset me because it was so bizarre, but that was probably the intention, for the child - like the Dog - is manipulated by others, a puppet in every sense. In the opera, the Dog has three different voices, reflecting different aspects of its nature. "What is better, a good dog or a bad man?" asks the composer, Alexander Raskatov.

In Amsterdam, Sergei Leiferkus sang the leading role, with Martyn Brabbins conducting. Here's a link to the review in the NY Times which describes the music, a combination of Russian chorales and "a mock lugubrious quality" which underlines the satire. Whether the music's the attraction or the tale itself, I don't know, but this looks like superlative theatre.  Complicite and theatre fans could be drawn to opera by A Dog's Heart. And opera fans should pay attention to the stagecraft. Despite the subject it may not be too squeamish though there's "blood". It's satire, after all.

The cast in London are also very strong. Stephen Page, Leigh Melrose, Andrew Watts, Peter Hoare and others, specialists in contemporary music. Gary Walker conducts. Performance-wise this should be good. From what I've heard so far the music isn't difficult or demanding, so if the word "modern" scares, it's not a big issue here.

I have no idea what I'm going to think about A Dog's Heart but I'm pretty certain of one thing : it's going to be challenging. Much more interesting than yet another revival of something dull which is the safe option in these straitened times. So going to A Dog's Heart is an act of faith. It runs for 7 performances –20, 22, 24, 26, 30 November 2 December at 7.30pm and 4 December at 6.30pm
There's a pre-show talk, too, on 20 Nov. For details, see the ENO site.

And here's a wonderful clip from De Nederlandse Opera :