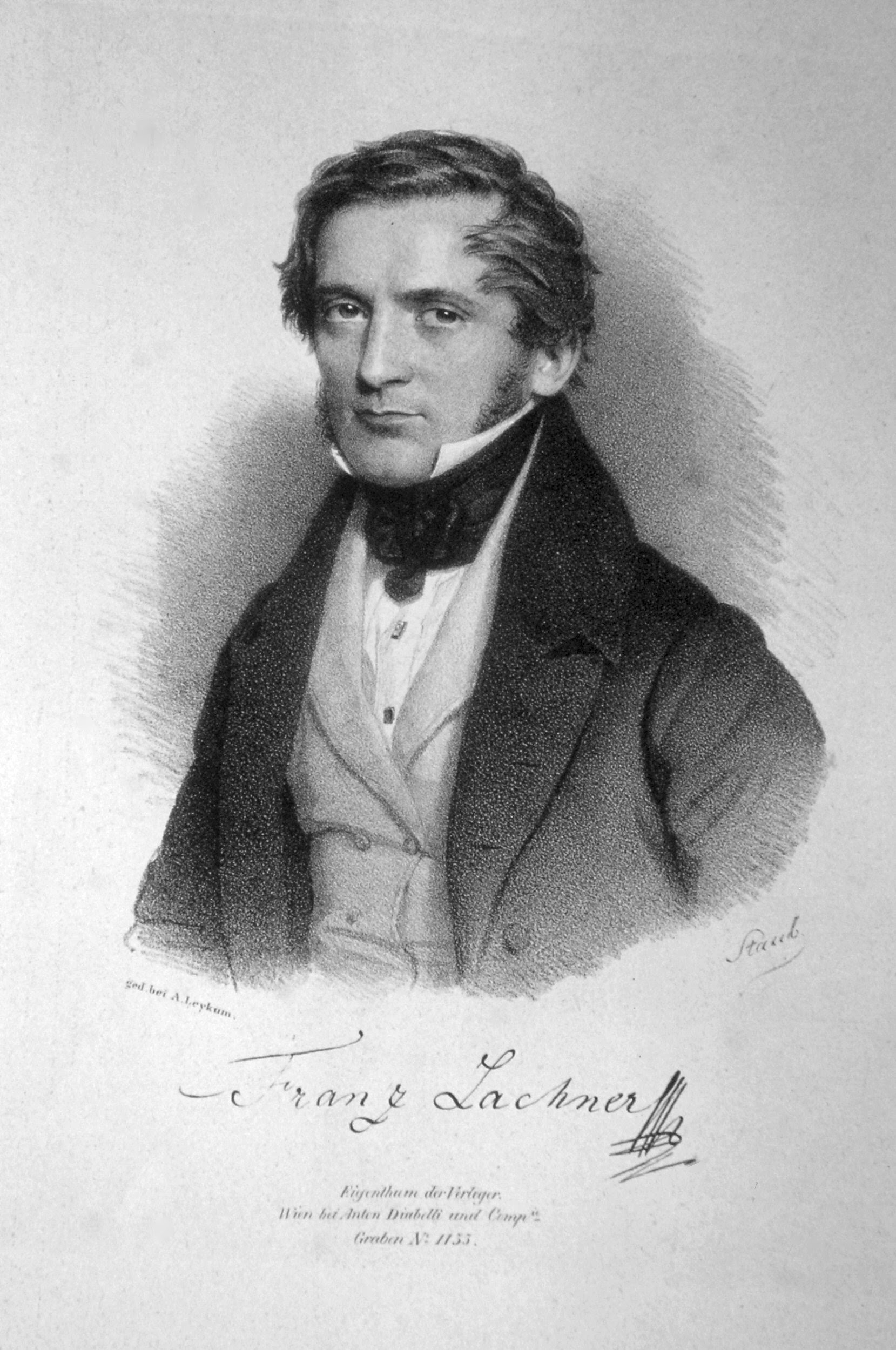 Franz Paul Lachner (1803-1890) was six years younger than Schubert, and knew him personally. He's in the famous drawings of Schubert at the piano with tall, handsome Johann Vogel in pride of place. Prussian by birth, Lachner worked in the Lutheran Church in Vienna, hence his interest in liturgical music and big pieces for organ and choir, which the raffish Schubert crowd eschewed.

In 1836, Lachner landed a powerful job as conductor of the Hofoper in Munich. He had direct access to the King, and influence on everything musical in Bavaria. Lachner was to Munich what Mendelssohn was to Leipzig and Berlin. Nonetheless, today Lachner's relatively unknown, primarily because his music isn't nearly in the league of his major contemporaries. His problem, too, was that he wasn't Richard Wagner. When Wagner came on the scene, Lachner pointedly retired.

Nonetheless, Lachner is fascinating as a kind of missing link, suggesting what 19th century music might have been without great geniuses. His chamber music is fairly well known,  and there's now more interest in his songs. Angelika Kirchschlager is singing four songs from Lachner's Sängerfahrt op 33 on Friday 5th at the Wigmore Hall, where Mark Padmore is singing on December 6th (recording planned).

Highly recommended is the recording by Christoph Prégardien and Andreas Staier. Prégardien's brilliant because he understands how Lieder is a unique genre on its own terms, not lesser opera but a highly sophisticated blending of meaning and music. Superficial is not enough! On this recording Prégardien is youthful,  his voice pure and clear. Exquisite, because Staier's playing fortepiano, the sounds much lighter, closer to authentic period sound. This liberates the songs, bringing out their lyricism and elegance. Good performance makes a difference when music isn't absolute top quality  Avoid the disc on Oehms Classics (2004) , it's dire. Prégardien and Staier chose ten of the 16 songs in the set : get the score to appreciate how they fit the larger cycle.

Prégardien and Staier ware wise, too, to place Lachner in the context of early art song, deliberately avoiding comparison with Schubert and Schumann who set these same texts but in an altogether more inspired way. Instead, we hear Beethoven's An die ferne Geliebte, (1816), the first true Lieder cycle, and songs by Nikolas von Krufft (1779-1818), a Beethoven contemporary. Where Lachner's coming from, despite his love for Schubert, is an earlier, simpler tradition (not that Beethoven can be simple).

Lachner's Sängerfahrt dates from 1831-2, when Lachner was still in Vienna. Hence its delicate Romantic charms. A lovely fairy is bathing in a brook in Die badende Elfe. Bright appregiatos, and the intimacy of the word setting schimmerm in dem Mondenschien, rising upwards, enahnced by repetition rather than over emphasis.

Die Bergstimme is altogether more innovative . This could be proto-Schumann, in its dramatic intensity. It's remarkable how much virility Staier brings to this song : the Horseman and his horse are strong, looking forward to vigorous life. But the voice of the mountain spirit persistently whispers death and the man is lost. Der Stimm erwidert hohl, Im Grab wohl!

Another surprise. Im Mai uses the same text that Schumann would begin Dichterliebe with seven years later. The sprouting buds and branches of bloossom awaken in Lachner a wonderful circular melody. So beautiful - reminiscent to me of the melodies Beethoven and Mendelssohn used in order to evoke the countryside. Staier's fortepiano sounds like the lyre of some antique shepherd in an Arcadian landscape.

Almost violent ostinato leads into Die Meerfrau : notes of alarm? For the lady of the waters is a siren who seduces in order to kill. Tension rises as he lunges wildly at her victim. Lachner interprets the poem from the siren's point of view, as, I think, does Heine. Another siren in Der Traumbild. Prégardien's voice darkens sensually as he describes the vision who comes in his dreams, and the "arcadian" melody surfaces. But ostinati again indicate menace. The voice drops quietly, then leaps upward in horror as the vision presses him tightly to her breast. Then, suddenly Da kraeht die Hahn (the cock crows) und stumm entwich die marmorblasse (short silence) then a strangulated cry, Maid! In this song Prégardien negotites the transition of timbre and mood deftly - very impressive.

Since the cycle was written when Lachner's was courting his future bride, one wonders what these images of nudity and female entrapment meant. Possibly no more than slightly risqué flirtation. Missing from the Prégardien and Staier Lachner Sängerfahrt recording are some fairly straightforward songs, but some others are worth reviving, like Wonne und Schmerz (oddly lyrical) and Ihre Gestalt (contemplative).
at November 01, 2010