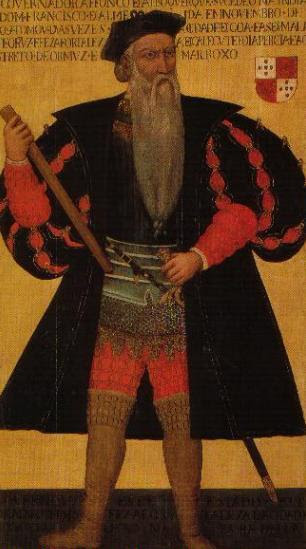 On this day 500 years ago, Alfonso d'Albuquerque (1453-1515) formally laid claim to Goa in India. The Portuguese had been venturing east in search of trade (and adventure) and had already established posts all round the coast of Africa. India was a far bigger prize  but coastal trade was controlled by Arab merchants. It was impossible to keep supply lines between Europe and the East without a regional base. So in 1507, Albuquerque did a deal with the ruler of Hormuz in the Persian Gulf and built a fort which was a springboard for expansion. Exploiting the rivalry between the seaborne Muslims and local Hindu rulers, Albuquerque attacked Goa first in 1509 then again in 1510. Victory was declared on 25th November.

So this day marks 500 years of European presence in Asia. From Goa, the Portuguese went on to conquer Malacca in 1511, also by doing deals between rival local rulers. They first visted the China coast in 1509 and reached Nagasaki in Japan in 1543.  Macau was offically founded in 1557. There were also big "Portuguese" communities in Burma, Thailand, Indonesia, Vietnam etc, not self governing but mercenaries and subjects of the local rulers.

Vasco da Gama (146?-1524) came to Goa several times, setting the city up as the administrative centre of Portuguese activities in the east. From Goa, the Portugese branched out all over India and beyond. If you're ever in Park Crescent, London (next to Regent's Park, on the way to the Wigmore Hall), one of those mansions belonged to a woman whose ancestors came from Goa to Macau. She ended up in London in the 1840's because her husband had business interests everywhere. Probate London, 1844, not Macau. Her descendants went on to marry into the aristocracy, both in England and Portugal. Stonor Park, Stonyhurst, etc all have a Macau connection.

Because white women didn't go East, right from the start the Portuguese in Asia were mixed race, multicultural hybrids. Their empire was coastal, ad hoc, always dependent on local initative and alliances. Guns of course, that was a fact of life then. But the Portuguese empire was nothing like Victorian India and different too from Spanish South America. Unfortunately the best books are no longer in print. The classic references in English are nearly all by Charles Boxer, but copies cost a fortune. There's good work too by an Indian professor, KM Panikkar, who studied both Indian and contemporary Portuguese archives. Impossible to get though. Pity as the Portuguese seaborne empire (as Boxer called it) is an interesting example of Europeans adapting to more powerful Asian nations. Acculturation very much both ways. Indeed, the European baroque might not have flourished as it did without the discovery of new worlds beyond Europe.
at November 25, 2010