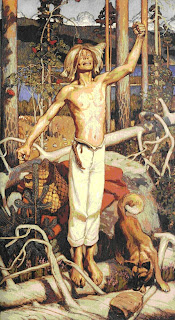 Sibelius Kullervo on BBC TV 4 tonight live from the Barbican. Except it's from 1992. Two of the greatest Sibelius singers of all, which makes it worth hearing, Everyone looks so young. Jorma Hynninen is now 70, but here he is still in his prime. Hynninen is perhaps the greatest exponent of Finnish song ever. He recorded the very first Kullervo, with Paavo Berglund in 1985, soon after the work was rediscovered. Anything he does with Kullervo is historic. Soile Isokoski is in her early 30's and looks positively virginal. She's using a score, not that that means anything, because even singers who know their parts well often keep a score handy for security.  But this is three years before her 1995 recording of Kullervo with Lief Segerstam. It's good to hear her near the start of her career, now that she's turned Sibelius performance around. Quite possibly no-one has done as many Kullervos, Luonnotars and Sibelius songs as she, though most were live performances, some much better than more formal recordings.

The orchestra really sounds like it's 1992. Sir Colin Davis's Sibelius harks back to early 20th century British practice, which is valid, but smooths out the raw energy in the piece. The first movement is so polite it's dull, but perservere. After the maiden's suicide, Davis responds to the horror the music expresses and things pick up in the "battle" movement. There's almost no way the savagery in this music can be suppressed,  so it's still thrilling, though Davis's conducting is very dated and doesn't access the depths of the piece. Sibelius's writing reflects the stylized barbarism of the story. Hard, driving rhythms, dissonaces and relentless pounding. This is way outside the Austro-German mainstream. Sibelius is accessing a far deeper tradition based on the oral tradition from which the Kalevala as we know it now developed. Sibelius is doing what Stravinsky, Ravel and Bartók would be doing decades later. How primal Kullervo must have sounded in 1892.

Perhaps that's why Sibelius suppressed this piece. He was hyper-sensitive, and despite his fame, quite insecure on a deeper level. Even when he was financially secure, he felt impoverished.  There is a crackpot theory around that suggests he stopped writing because he got a state pension which shows a complete misunderstanding not only of the man but of the creative mind. Shame on those who perpetuate such nonsense.  Because Sibelius  was a visionary, he could imagine music so advanced that even he could not achieve what he dreamed of.  Hence the "silence of Järvenpää". Because Sibelius was the symbol of Finland to the world, he was always under pressure to excel, and meet public expectations. But an artist needs the freedom to experiment and grow. Listen to Tapiola, the Seventh Symphony and The Tempest. So perhaps Sibelius pulled back from the brink just as he did with Kullervo.  Luckily for us, though, he went on to write more, and the manuscript of Kullervo wasn't lost.
at November 18, 2011

Email ThisBlogThis!Share to TwitterShare to FacebookShare to Pinterest
Labels: sibelius

Mr.(?)Tchil writes that"Davis's conducting is very dated and doesn't access the depths of the piece".

I beg to disagree. Finland´s foremost critic - who knew more about Sibelius than most others - was in the audience at this concert. He - and most other critics - praised Davis´s interpretation.

Mr. Tchil, please, do not insult one of the greatest conductors of our time by calling his conducting "dated"!

Remember that this concert was only a few years after Kullervo was rediscovered. Of course it was praised. But twenty years have passed. We're now much more aware of the potential in this symphony than we were in 1992. That's why this sounds "of its time". Even the great Paavo Berglund changed his approach to the piece. If you really care about this music, you should realize that you can learn from different approaches and ideas.

First Berglund recording 1970 for EMI, but SECOND Berglund recording (with JH) is 1985 also EMI Records. So, as we know, Berglund made two recs of Kullervo
(the best of which being the very first one, most people will undoubtedly agree, I suppose)