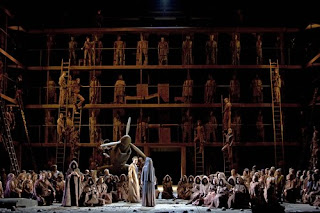 George Enescu's Oedipe (premiered 1936) is at last making its way into the mainstream repertoire. It's not mindless easy listening, because Enescu's dealing with the primeval saga of Oedipus, from birth to death. Oedipus is cursed from the moment he's born. Weary, blind and dispirited, buts welcomed in Athens. but by then it's too late. Oedipus chooses death. Along the way, he's married his mother, killed his father and much else.

I'd heard horror stories about the production, since La Fura dels Baus are controversial, but it was much better than I feared.  Dark and forbidding - but this is a strange world, with irrational curses and tense, brutalized citizens, threatened by plagues, wars and disaster. A whole society in permanent state of anxiety. Of course it's not pretty. Images are glimpsed in shadow, as elusive as images in a nightmare. Yet this reflects Enescu's music, which throbs and flows like an invisible organism,  the vocal parts signposts to meaning. (Read NW-Paris's comment on my recent opera dream. Maybe prophecy is still with us.) So I don't have any problem with the Sphinx depicted as old fashioned aeroplane. Planes have wings, too, and often have female names. Sphinxes are quixotic! When Marie-Nicole Lemieux crawls onto the fuselage, she sings with demonic force. Fabulously effective. In a way, one might read the Sphinx as mother/wife. Since she's powerful, and female, she "must" be destroyed.

The production is claustrophobic, but that adds to the sense of foreboding. Jocasta "with the white arms" follows Oedipe in marriage and looks back, her arms now covered in blood. When Oedipus exits life, he walks through a narrow passage into light. Birth canal anxiety? Freud would have read much into this. So watch and listen. I won't say "enjoy", but this is a thoughtful  approach to an opera which can be deeply disturbing. Read the plot beforehand as a lifeline.

I saw the first night of this production. Disturbing and provocative but that is the subject.

The descent of the Sphinx in her burning Messerschmidt was truly spectacular.


Better this than the superficiality of the ENO Onegin.