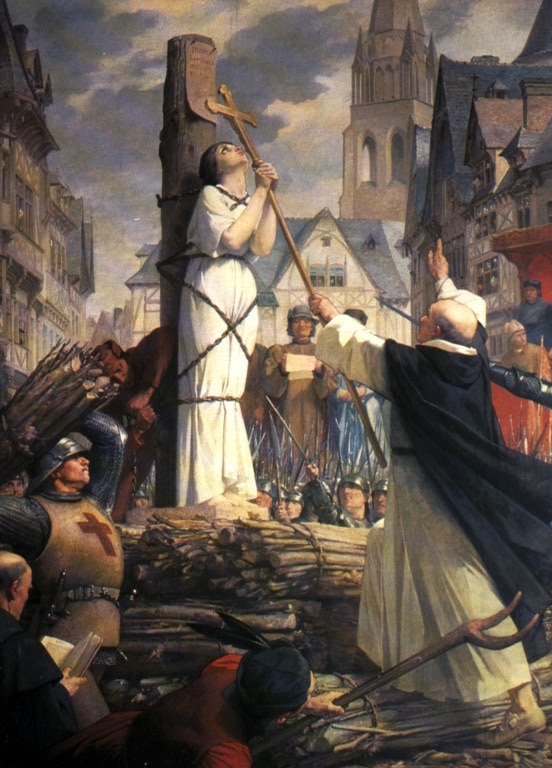 Arthur Honegger's Jeanne d'Arc au Bûcher (Joan of Arc at the Stake) is magnificent. Rarely does an ensemble this size grace the Barbican stage,  but the extravagance was totally justified.  This massive oratorio is amazing, but you can hear why it hasn't been adopted as part of the British choral tradition. It's not because Honegger blames the English for the invasion and Jeanne's death but because it contradicts so many assumptions of what oratorio should be.

Ténèbres, Ténèbres, the London Symphony Chorus intones, but don't expect a solemn Latin Mass. The massed orchestral and choral forces are screaming accusations at the "heretic, sorceress, demon" and then we see Jeanne, (Amira Casar) a small, gamine figure who really does resemble Joan of Arc, her metallic blouse looking like a  shining breastplate. Joan led the defeat of the English at Rheims, and united France under the Dauphin.  But she was just a shepherdess from Domrémy. How could such things be possible?  Joan was a pure spirit, who saw nothing odd about speaking with saints and angels.

Honegger's Jeanne d'Arc is oratorio as psychodrama.  While the trial progresses, Jeanne's mind moves outside the courtroom, back to her youth, her visions and her simple faith in her mission. Signifcantly, Jeanne doesn't sing but speaks, usually unaccompanied.  At times she slips into a kind of Sprechstimme as she dreams about her past. Frère Dominique, her sympathetic confessor, (David Wilson-Johnson) sometimes sing an approximation of plainchant but shifts into speech. The other main roles (Nicolas Dorian and Marc Antoine, playing multiple parts) are taken by actors who can handle unusual demands, such as speaking in "donkey" voices. Otherwise voices come from within the chorus, the crowd of accusers. It's an interesting mix of stylization and naturalism, which fits well with the idea of Jeanne examining her conscience, as she's told to do, even if she doesn't come up with the approved answers. When she says "No", her accusers say "She's saying Yes!". The "Porcus" farce (Paul Nilon) is pretty wry. Despite the grim situation, there's a lot of good humour in this work, which keeps it down to earth.

Some fascinating musical writing too. As the crowd bay for blood, Jeanne swoons in fear. Perfect moment for ondes Martenot (Cynthia Millar)  to wail above the tumult. Does it suggest supernatural forces good or ill, or does it suggests Jeanne's fear?  A boy alto (Jason Panagiotopoulos) sings a long solo, completely separate from the children's choir, and Jeanne suddenly starts to sing a simple melody when she reverts to reverie.  Honneger employs different rhythms and tempi, which evoke the many cross-currents in the situation, so the orchestra itself seems to be acting as polyphonic chorus. (For more on Honegger's style see my previous posts HERE, HERE and HERE).

Honegger's style in Jeanne d'Arc is almost deliberately cinematic. He cutrs between moods, like a film director cuts between scenes, gradually building up denser images. We hear an approximation of country dance (oddly modern and jazzy, perhaps on purpose), snatches of mock-liturgy. But mostly it's a constant sense of movement between states.  Honneger was an avid cinema goer, closely linked to the French movie world. He wrote the score for Abel Gance's epic Napolean (1927), the most ambitious movie of the time,  a silent which was shown in cinemas with live ochrestra, so he knew the technical demands of writing for film. Almost certainly he would have known Carl Th. Dreyer's The Passion of Joan of Arc (1928) and moved in the same arty circles. Perhaps Jeanne d'Arc (1935) is Honegger's response to the film? It doesn't follow the narrative in the film, and Honegger's Joan is a very different personality, but the idea is intriguing.

No expense spared, for this is a work that needs complete committment. A great pity then that the programme notes were useless. They're cut from something else and pasted into the booklet without context, so there's no actual description of the music or drama, or even an indication of why Arthur Honneger is significant.  Since Jeanne d'Arc au Bûcher is a rarity and so un-English, it deserves a more detailed introduction. Why spend all that money producing a performance when the audience isn't primed to appreciate it?  The focus of the Barbican Joan of Arc weekend seems to be Joan as cultural archetype, symbol of "Women in Leadership", a theme which runs through other events. Many women in leadership are far too busy to get drawn into events like these, but one participant told me they were excellent.  But was Joan of Arc a "woman in leadership"?  She was just following what her voices told her. Today such folk get drugged into silence. As Honegger and his librettist Paul Claudel suggest, when Joan is burnt at the stake, the flames free her from the chains of worldy power games. They're making a parallel with matrydom. "Who lays down their life for others", as it says in the text.

I'll be writing about the film version of Honegger's Joan of Arc by Ingrid Bergman and Roberto Rossellini on Monday. Please come back, as I am doing a series of Joan of Arc (click labels below)

Thank you for this comment and for the links to the music and the staging. Even without the latter I felt the performance so lively that it staged in by itself perhaps less subtly than a stage directing but strikingly enough in the mind. In fact in abstraction, with the singers so much involved and movingly so (more than what I knew from CD hearing), the orchestra unfolding the drama, the work seemed at times to come close to an idea of what would be the strength of "abstract music" itself. Is it so different from an "hybrid" work like Zemlinsky's Lyric Symphony? I think the conducting goes sound and deep in the expression of music, not just in paroxism, I did not hear before. And I loved to hear the prologue in English (apparently surrounded by complete silence and attention) because, while it removed some of its "strangeness" it brought the universality of the story from the onstart. Merci encore.

I just got back from hearing Alsop do the same work in Baltimore. I'm quite sorry to say that it made a very different impression on me. I hadn't heard the work in nearly ten years (when I did, it was in English), and I remember being thrilled by it. But this time it didn't work for me. It has some absolutely wonderful moments, but the over-prominence of the script sort of killed it for me. Disappointing, especially because I love Honegger.

Maybe the performance? The chorus in London was unintelligible and little definition in the orchestra. Singing/speaking good, though.