Inside a Fabergé Egg - Bolshoi Ruslan and Lyudmila 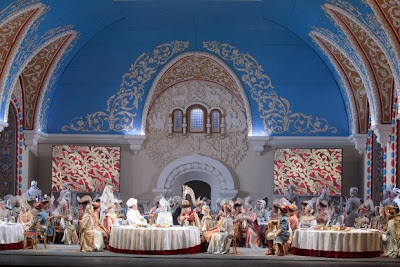 What must it feel like to be inside a Fabergé egg ? The new Bolshoi Theatre is sumptuous. It's splendid outside, and stunning within. That kind of extravagance is a visionary act of faith in the value of art. For £430 million Moscow has a jewel which enhances the nation's reputation. For £800 million in 2002, London got the Millenium Dome, which continued to bleed money until it became an arena for pop concerts.

Fabergé egg indeed, as the curtain rose on the first full opera, Glinka's Ruslan and Lyudmila "as iconic in Russia as Carmen is in France" as the host says on Arte TV (watch full video HERE).   Make time to listen carefully, luxuriate in the exquisite performance. Vladimir Jurowski conducts. The Bolshoi is in a completely different stratosphere from Glyndebourne and the LPO, with all respect. If they snare him, on the basis of this we're all in for wonderful things.

Ruslan and Lyudmila isn't really medieval Kiev. Indeed, the story bears a striking resemblance to Tasso's Orlando saga which gave rise to works like Armida, Rinaldo, Orlando Furioso, Orlando Paladino and much else. Thwarted lovers, sorcerers and sorceresses good and bad, enchanted palaces, magic gardens. Ruslan and Lyudmila fascinates because it's fairy tale fantasy. So we gasp at the sheer beauty of the wedding feast and suspend belief in plot logic.

Ruslan (Mikhail Petrenko) and Lyudmila (Albina Shagimuratova) seem blissfully happy. But wait! Like any decent fairy-tale, something's not right. Bayan the mystic (Charles Workman who also sings Finn the white witch) warns of danger. Then you notice wedding guests with big head masks. Then, while the guests are dancing, half hidden in the melée, there's a giant head. Friends or foes? Lyudmila gets whisked away in a carpet, as in the original.

More controversially, director Dmitri Tcherniakov and his team show the characters in the following acts in normal "modern" clothes. This isn't wrong, since fairy tales deal with human situations (albeit extreme). Indeed, we can concentrate better  on the singing and acting. When Ruslan confronts the Giant Head, it's a human face projected on a backcloth - much more moving than a comedy structure. Given the horizontals that large crowd scenes dictate, film projections are a good way of using this vast stage. But Ruslan's confrontation with the Head is extraordinarily dramatic - one of the best moments inn the whole production,

Rather less effective though are the portrayals of Finn and Naina the Armida-like sorceress, neither demonic nor sympathetic. The scene in Naina's castle is a mess. Can these aimlesss sirens seduce anyone? Their captives look bored out of their heads. On the other hand, had Tcherniakov shown them more forcefully, either as hooker vamps, or sweet nubile babes, it would have upset many in the audience. Compromise isn't a good choice.

Infinitely better are the scenes in Lyudmila's dream-state. Lit in luminous whites and blues, the set seems to float in space, like Lyudmila, bewitched. The dance sequences suggest what might be happening in her mind. Again, the simplicity allows full focus on the singing - Yuri Minenko's Ratmir is divine! Tcherniakov may not please conservatives, but these last two acts are sensitive to the music, movement enphasizing what's in the orchestra. Indeed, throught the opera, solo instruments appear on stage as part of the action, showing how Glinka uses them to spotlight inner states. For example, harpsichord and harp in the banquet scenes. Lyudmila sings her long Act IV aria shadowed by a violinist, the music expressing, perhaps, what's in her psyche.There are things in this Ruslan and Lyudmila that irritate like crazy, but moments like this which make it worthwhile.
Please see also Opera Cake
at November 22, 2011