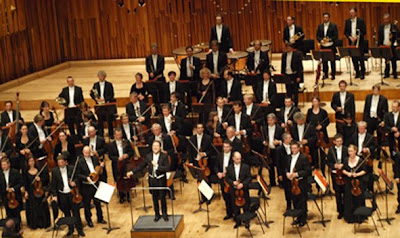 There's a sci fi movie about a utopia where medicine is so advanced that no-ones dies unless they choose to. They go into a chamber where they're soothed away with music, sights and senses they find most blissful. One man chooses Beethoven Symphony no 6  What an ideal exit into the unknown, , bathed in the glow of this uplifting, life affirming music.

At the Barbican, London, Riccardo Chailly and the Leipzig Gewandhaus Orchestra performed Beethoven Symphonies No 6 and 4 for an unusual audience. Lots of young children, people under 30 and older folk clearly new to music, most of them absorbing avidly. What an ideal entry into the world of music! Chailly and the Leipzigers represent great tradition, but not a dead tradition. They played Beethoven when Beethoven was new and radical. In fact, he still is, as this Leipzig Beethoven series has proved.

The gruelling month-long tour is drawing to a close, so orchestra and conductor seemed more relaxed on this occasion. So their Beethoven 4th was elegantly paced.  The mysterious beginning emphasized the poise of the second movement, and the two allegro movements crackled with mordant wit. Those cheeky horns, and trumpets and trombones positioned so they blast away at well-mannered strings!

Bruno Mantovani's Upon One Note is built upon the opening B flat of Beethoven 4, which Mantovani calls "questioning". He uses it as an agent provocateur provoking different responses from different sections of the orchestra. Very striking, eventful beginning, contrasting densities. I thought of the "storm" in the Pastoral in the  noisier passages,  though Mantovani's iinterest seems to lie more in the way the smaller themes brush against the big and challenge them.

In Beethoven 6th, the Leipzigers showed why live performance is so much fun. Studio performances may technically be more perfect, but live has a zing even when it's broadcast. (So long live BBC Radio 3 concert transmissions).  Music should not be mausoleum.

This wasn't the most splendid of Pastorals, and the first horn blew a few flats, though he's probably more mortified than anyone else. But he's obviously a very good musician and has been working hard all month. He deserves appreciation. If anything, the deviation from norm made the whole performance seem more spontaneous. Musicians aren't machines, they've got to sound as if they're real human beings making music together. "Together" is the crucial word, for there are three parties to any listening experience - composer, performers and listeners.  What we get from a performance also depends on what we put in.  Some in this audience were clearly rapt, and won't forget their night with Beethoven and the Leipzig Gewandhaus Orchestra even when they're older and greyer.