Britten Owen Wingrave - made for TV 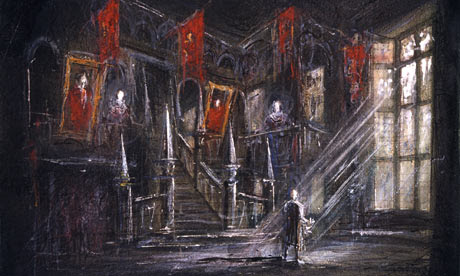 This year's Aldeburgh Music Festival begins with Benjamin Britten's Owen Wingrave, which Britten himself conducted in the same theatre in November 1970. For my review of the Aldeburgh production see HERE.  While the opera was in gestation, the revolutions of 1968 were raging. Paris was brought to a standstill by Danny The Red and student protestors. Russian tanks rolled in to crush the Prague Spring. Buddhist monks burned themselves alive on the streets of Saigon. The US military was bogged down in the unwinnable quagmire of the Vietnam War. Britten saw these images only in print. He didn't, as yet, own a TV set. Yet Owen Wingrave was planned for television and broadcast to the nation by the BBC. It says much about modern Britian that such investment in artistic vision would be permitted today.

The original BBC film of Owen Wingrave is worth watching for obvious historical reasons: the audio-only recording is a benchmark  The cast included most of the Britten specialists of the time, such as Benjamin Luxon, John Shirley-Quirk, Heather Harper, Janet Baker, and  Jennifer Vyvyan. Peter Pears sang Sir Philip Wingrave. Poor Pears, he's a brilliant singer, but he can't act, even when he's playing a stiff old man. 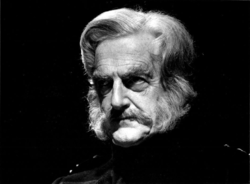 Concentrating on the audio alone, and using your imagination for the visuals is a good idea, because you can engage with what the music depicts. "Listen to the house!" the female singers repeat, their lines intertwining, as if a knot - or noose - were being drawn tight. For the house does speak - "creaks and rustles, groans and moans" (to quote Mrs Coyle). The oppressiveness is almost palpable.  "The "boom of the cannonade", created by percussion and low brass is so sinister that we could be hearing a thousand years of ghosts marching relentlessly towards death; Paramore is thoroughly haunted. Who is the ghost of the boy in the locked room? Is he the bully or the murdered boy, or is he the malevolent force that's been driving Wingraves for centuries?

At first, the original BBC film seems realistic in a conventional sense, traditional enough to please the most narrow-minded conservative. Late Victorian or Edwardian costumes, a period décor. Spencer Coyle's home is a horror of overstuffed furniture, all flat surfaces cluttered with knicknacks. Fans of Antiques Roadshow will swoon. But the opera starts in Paramore, where the portraits of Wingraves past glare down from the walls. But look carefully: the portraits are most definitely not "period" but hideous pastiche. Paint in thrown on in globs, faces distorted as if the Old Masters who painted them were prototype Francis Bacons.  Don't assume the paintwork is disintegrating : perhaps these portraits tell us more about their subjects than we dare know. "Listen to the House!"

As the music leads Owen towards Paramore, we see a series of drawings of the house, from different angles- hideously drawn like bad images off cheap paintings : weeds grow in cracks, the house is in decay. The interior with its wide staircase belongs in a horror movie. When the music depicts fanfares, we see real flags, but made of roughly painted rags. Those who demand "historical realism" in opera stagings absolutely do not get the point. It's also relevant that Britten and Pears were fond of relatively modern art.

Although Britten didn't watch TV until fairly late in life, he watched a lot of films, so he knew very well how film might support abstract musical ideas. Indeed, composers wrote for film almost as soon as sound movies wewre made. Britten's war work included Night Mail. When Owen sings his soliloquy "At last, it's out"  he's seen alone in the park, while images of his family are transposed over him, as their voices intrude upon him. Cinematic technique adapted to music, and vice versa. The interplay between film technique and music is even more interesting in the scene "There was a boy" when the legend of the house is told. The narrator is  heard through an echo chamber -boys voices heard from a distance, and the sound of toy horns and bells. The boys are seen in sepia slow motion, as if in early film. An eerie effect, suggesting a time tunnel.

Owen is probably not much more than 18, between school and a military commission, and Kate's not much older. Indeed, a sub-theme of youth versus age runs through the opera, though it's not dominant. Owen and Kate's music, however, is far too sophisticated for teenagers.  Benjamin Luxon was only 34 when the film was made, but looks and sounds somewhat overblown. Those who insist that appearances matter more than singing just don't understand opera, or indeed art. My ideal Owen is Jacques Imbrailo, not because he looks young but because his voices glistens with purity and strength.

Colin Graham directed the staging, while Brian Large directed the film.  Stage directing and film directing are different disciplines with different perspectives. Very few directors can do both equally well. A good film director takes his cue from the stage director, and both take their cue from the music and the meaning. Large was only 32 when he made this film. He was to go on to become a pioneer in the art of filming opera. Although this film is very dated - it reeks of the 70's  - it's worth seeing because it shows how much more finesse there is today.
at June 14, 2014