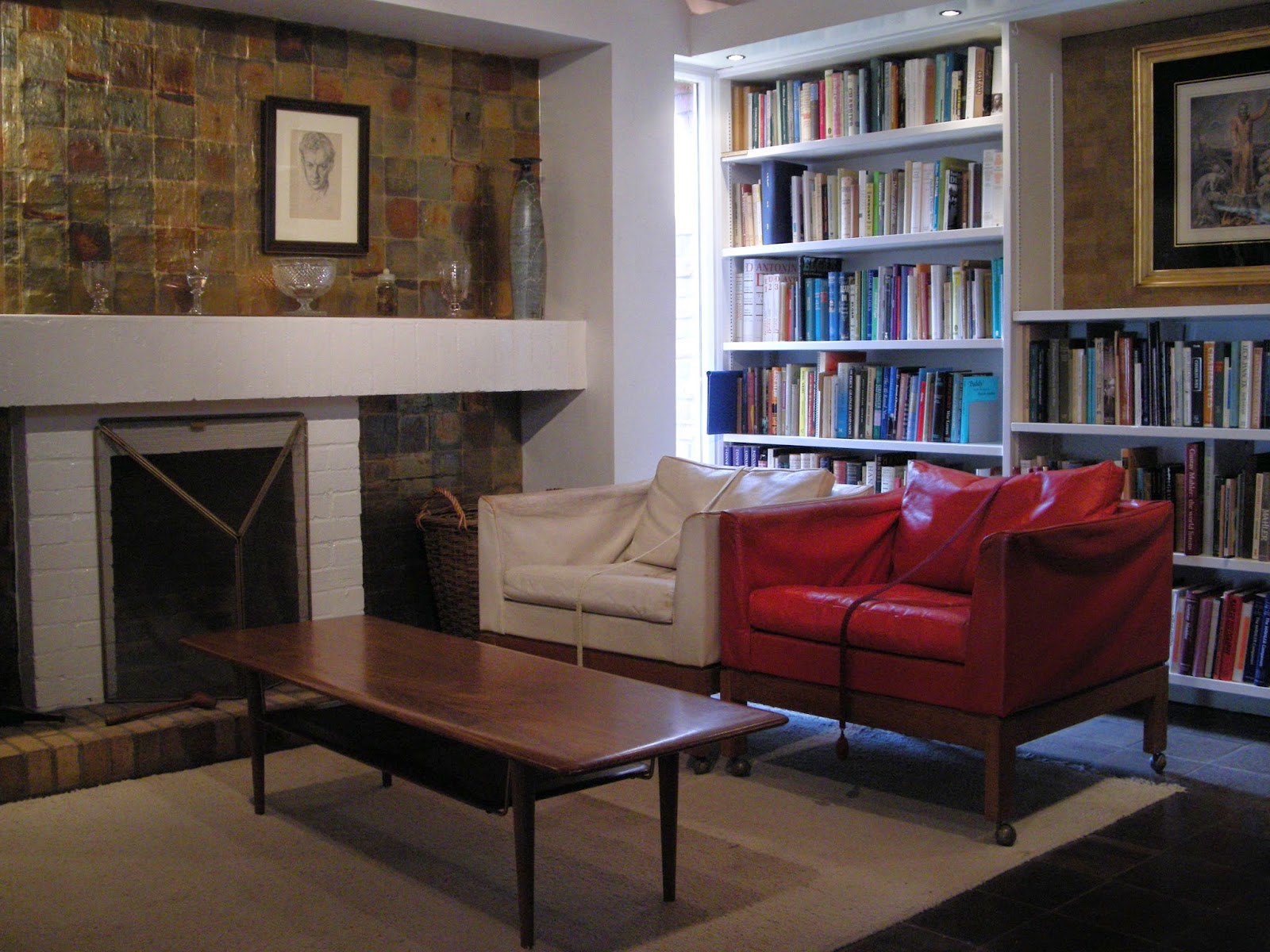 In the Red House, Aldeburgh, where Benjamin Britten lived while Owen Wingrave was being written. Read my review of Britten Owen Wingrave at the Aldeburgh Music Festival here This is part of the library which Britten and Peter Pears used. The décor is totally of its time, preserved much as it was when they chose it. Who sat in the red chair?  Who sat in the white?

Off to Aldeburgh now, for Owen Wingrave at Snape. It's the fourth production I've seen. What period is Owen Wingrave really set in? Can a militaristic family who worship sacrifice really survive from Agincourt to Kandahar? Statistically they'd have been wiped out long ago. Soldiers who die young reproduce less frequently than most men. Rather, I think Paramore is a state of mind. The house is a metaphor for closed minds and conformity. Henry James, a psychologist, might have intuited it as a kind of mental prison, with the haunted room at its core. Maybe that's why the family is so afraid of the legend. It's significant that the women in Owen Wingrave are just as psychotic as the men, perhaps even more so. Mental rigidity is the antithesis of the creative spirit. Perhaps the men in this family run away to war to escape something even more horrible than physical death?

When Owen confronts it, he's confronting the source of the psychosis in his family. That's why they are so terrified of the room. They'd rather get torn apart by sabres on the barttlefield than confront the darkness in their psyches. Owen is not a hero in the usual sense of the word.  His whole persona seems to go against flag waving and bombast. For me a key to his character is that he is one of Britten's innocents. Purity of spirit is the most elusive form of bravery, ever. Although Owen Wingrave connects to The Turn of the Screw, in many ways another connection is with Billy Budd, who doesn't conform to any simplistic idea of "hero". Captain Vere spends the rest of   his life trying to figure out why Billy went willingly to death. When Owen is kicked out of Paramore by his grandfather, he finds peace. Perhaps he could have walked away and started a new life from scratch. But Kate, his childhood buddy, confronts him. She might be little more than a child but already she's been poisoned by the family mass hysteria. So he goes into the room. What happens next, I've often wondered ? Is Kate saved ? Does the family collapse?

Britten adds an extra layer of pacifism to Henry James's original, expanding the psychological with the political. It's absolutely valid that this aspect of the opera should be developed in this year when we remember 1914-1918. Pacifism isn't easy.   Defying the forces that push nations to war requires great strength and committment. It is by no means the easy option. Today, when Tony Blair refuses to connect his WMD lies with the present destabilzation,  we need more than ever to recognize responsibility for our actions.  In 1914 men marched to serve "the war to end all wars". But war did not stop war.

Please see my other pieces on Owen Wingrave, Britten and Aldeburgh by clicking on the labels below. Review to follow.