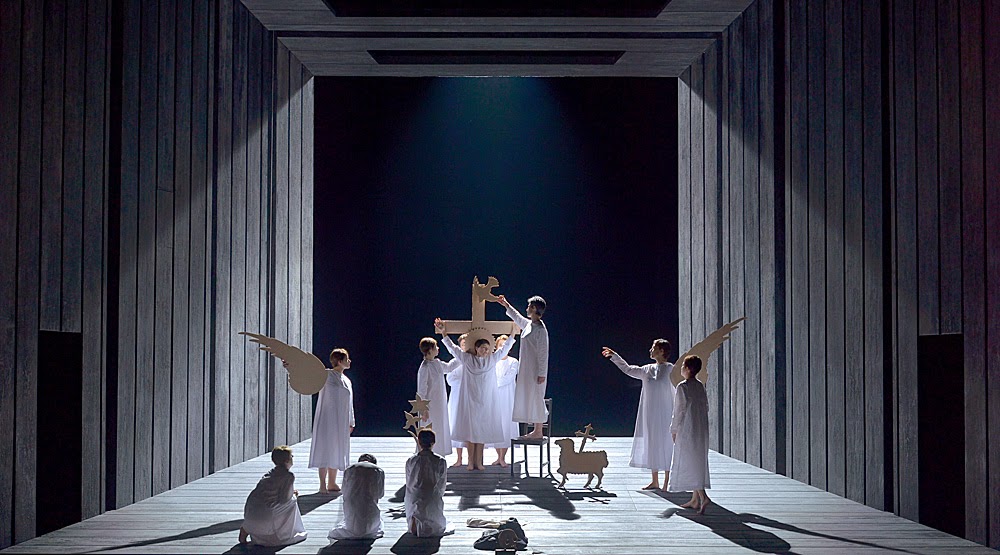 Francis Poulenc Dialogues des Carmélites at the Royal Opera House. Review HERE, but first a consideration of interpretation. Interpretation is  paramount to assessing any production. Criticism often latches onto things like sets and costumes because these are easy to isolate. But they're absolutely secondary to interpretation. Dialogues des Carmélites is interesting because it's austere; its meaning and methods not easy to penetrate.

The Carmelites take vows of silence, they don't fritter their lives away on frivolity. That's why Blanche chooses such a strict order. She lives in times of danger, when violence can overwhelm even the rich and protected.  Her mother was killed in shocking circumstances. Neurosis is implicit in her music which wavers tremulously up and down the scale. "C'est physiquement que je n'en puis supporter le bruit, l'agitation". In a convent, everyone wears the same uniform, but you can't escape into anonymity. Hence Poulenc defines the main characters through their music and their personalities. Robert Carsen's Dialogues des Carmelites at the ROH was first seen nearly 20 years ago.  Last in December 2013, Olivier Py created a superb but different  approach at the Théâtre des Champs-Elysées.  Py's style is colourful, and often humorous but it brings out the  beauty in the opera. When Blanche is accepted as a novice, Patricia Pétibon is transfigured, lit with silvery light. Dialogues des Carmelites, because it unfolds as a series of disconnected tableaux, is like the Stations of the Cross. This structure is significant, for Poulenc is connecting the nun's journey to the guillotine to Christ's journey to the cross. He further emphasizes the non-linear progression by writing expressive interludes which are as much part of the narrative as the text. Woodwinds sing, bells toll, and a "window" opens above the stage, the outline of trees, also lit in silver. Religious paintings often showed the Infant Jesus with a tree in the background, which will someday become his cross. When Madame de Croissy lies dying, Rosalind Plowright is shown in a bed hanging from the wall, so we can hear her voice project into the auditorium. It's also an image of Christ on the Cross. The Philharmonia Orchestra, conducted by Jérémie Rhorer, play savage, stabbing dissonances. The dying woman thinks God has forsaken her, her perception as distorted as the perspective of her bed on the wall.

Py's use of delicate, subtle colours emphasizes spiritual purity, Sister Constance (Sandrine Piau, one of the "whitest" voices around) positively glows. At this point, Blanche can't understand the miracle of simplicity. The singing in this production is exceptional. This cast includes the finest French repertoire specialists around : Pétibon, Piau, Véronique Gens (Madam Lidoine), Sophie Koch (Mère Marie de l'Incarnation). [Indeed, the interaction between the singers is electric - the sisters "feel" like sisters, Pétibon and Piau in particular. The finest singing around at the moment, could hardly be bettered].  The male voices are just as good. They are lustrous. Topi Lehtipuu (the Chevalier de La Force) sings forcefully, but with refinement and with lustre, suggesting that Blanche will find similar inner strength when she faces her destiny.

As violence closes in, Poulenc's music takes on richer dignity. Pétibon is seen with her hair shorn, but defiantly ginger, while a chandelier glows with rich, golden light. The nuns are condemned to death. Dark, glowering chords in the music, strange angular lights grow maze-like from the floor of the stage. Brassy trumpets, pounding percussion. Yet the visual image is that of a stylized religious play, such as children might enact. At the moment of their death, the nuns are restored to innocence. "Salve Regina", they sing, lined across the stage. As each is killed, there's a thud and a singer leaves the stage. Can something as gruesome as the guillotine be shown with such beauty?  Yes, for Blanche and her sisters have found a greater truth, which those without their faith cannot comprehend. Blanche is seen, arms spread wide like Christ on the cross. Her face is beatific, as she sways in a circle against a backdrop of stars.

Robert Carsen did not produce the MET Ring; that was another Canadian producer Robert Lepage.

Thank you Joihn ! A senior moment !

I have those too.