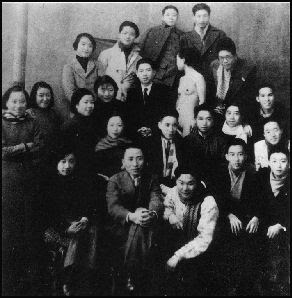 Dissident Ai wei wei poses naked with women? Far more radical was this event in the late 1920's in Shanghai where a group of artists posed for (I think) a formal graduation photo and included their life class model. It's a reference to Manet's Le déjeuner sur l'herbe but in China, unlike the west, there's no tradition of classical nudity. These artists were changing values within the society they lived in.

This week, Aung San Suu Kyi  announced that she would run for parliament in Burma.  This is courageous  because she's reaffirming the idea of democracy as "the will of the people". Although the generals mistreated her and other Burmese, she doesn't choose violent overthrow but works to heal from within. How can bad systems really change? Again and again, violence perpetuates regression. Cheer the fall of Gaddafi,  but remember what happened after the fall of the Shah. On the other hand, the non-violent collapse of Communism in Europe which really seems to have brought a new, if less secure, era. What brings about fundamental, positive change? I'm wary of rent-a-mob protesters who think protest is cute stunts and don't analyse issue by issue. That's no different from following party lines or demagogue politics. No one country can solve this Economic Collapse, certainly no one person. Real change, I think, will only come through a mature rethink of the fundamentals of the system, not stunts, not violence.
at November 21, 2011