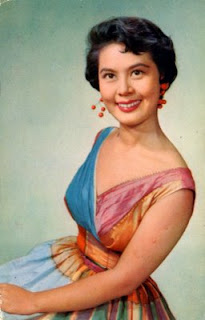 Verdi's La Traviata starts its second run of three this year at the Royal Opera House. But please read La Traviata and the Credit Crunch by David Chandler in Opera Today.  And my review of the November production with a much stronger cast. "One way of thinking about La Traviata is to consider it as a portrayal of bubble wealth that makes artistic capital from the shimmering, rainbow hues of the surface rather than showing any interest in what sustains the bubble."

Violetta lives the champagne lifestyle to excess because it's like an escape from brutal reality. Like the petals of a camellia which shatter at the height of their beauty, La Dame des Camellias knows she has to live for the moment. Yet she can see the wider situation and the effects on other people. That gives her the true nobility Germont respects.

The lady in the photo is Lin Dai 林黛 (1934-64) perhaps the most celebrated Chinese actress of her time. She came from an upper class background in Guangxi, a poor province ruled by an enlightened, reformist leadership under General Bai Chongxi (father of Professor Pai of Kunqu Opera fame) After the Communists came power, Lin Dai's family became refugees. Lin Dai started making movies at 17 and starred in many great classics from historic costume dramas like The Kingdom and the Beauty to comedies.

In Love Without End (不了情) (1961) Lin Dai plays Qing Qing, an orphan from the country who comes to neon-lit Hong Kong. Wearing a simple qipao, she sings a folksong in a nightclub, but impresses the patrons so much she becomes resident singer. Nightclubs were an important part of social life then, so they represent much more than entertainment. Qing Qing falls in love with Teng Pengnan (Kwan Shan 关山) a rich young man. But Teng's father dies suddenly, leaving huge debts. Pengnan has to save the family business and honour but can't find the funds. So Qing Qing rescues the Tengs by giving them money under a false identity. Qing Qing then seduces Pengnan (shocking in those chaste days) because she wants to lose her virginity with him. She's got to spend a year as the "secretary" of the millionaire who gave her the money but at least her first night will be love. So she's heroic because she sacrifices herself for others. But Pengnan, disgusted and enraged, walks out when he finds out. Eventually they reconcile and are about to marry when Qing Qing discovers that she has a fatal illness. So she runs away to a retreat on  a remote island where she's tended by a Catholic priest. In real life, there were Catholic ministries in Hong Kong's outer islands, and Lin Dai was a devout Catholic. But the La Traviata connection is obvious. Pengnan tracks her down, but, as in the opera, it's too late.

Lin Dai is incandescent on screen. She was a "natural girl", whose cheeky charm and perky optimism appealed to audiences in the turbulent 50's and 60's, but she's also an archetype of the ideal Chinese heroine who throughout history sacrifices her beauty for higher causes.  So  Love Without End is even more in the tradition of  Diau Charn (貂蝉) and Beyond the Great Wall. than a mere remake of La Traviata.  (Diau Charn falls in love with the general of a despot she's on a mission to destroy. In Beyond the Great Wall, a royal concubine marries a Mongol to save the nation), So Qing Qing in  Love Without End is Violetta who can see beyond conspicuous consumption. Consumption got them in other ways!  Lin Dai committed suicide at the age of 29. Possibly it was an aberration, an accident that went wrong. Her husband left their room intact until he died last year. Even the hair in her hairbrushes, and lipsticks half used.  So maybe life imitates art. The song below (sung by Gu Mei, Lin Dai lip syncs) is so famous that it evokes the whole period.